Minister of Education Sport and Youth 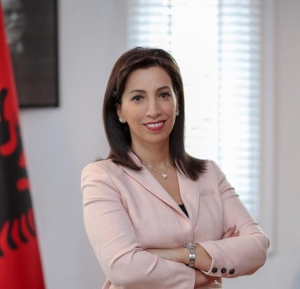 Mrs. Evis Kushi was born on 7th of October 1975 in the city of Elbasan. She is married and has two daughters.

Mrs. Evis Kushi started her career in 1998 as a lecturer in “Aleksandër Xhuvani” University, Elbasan, in the primary courses “Basics of Marketing” and “Econometrics” (1998‐2012). From 2010‐2012, she held the position of director of “Economics and Law” Department, Faculty of Economics, “Aleksandër Xhuvani” University, Elbasan. In 2012‐2013, she served as the dean of the Faculty of Economics in the same university.

From 2013, Mrs. Kushi is Member of Parliament representing the Region of Elbasan. In the Parliament she served in the Commission for Economy and Finances. In the same time, she has served as part-time professor in “Aleksandër Xhuvani” University, Elbasan, and “Mediterranean University of Albania”.

Mrs. Kushi has participated in many national and international conferences. She is author and coauthor in a number of scientific publications.

Mr. Kushi is fluent in English, French and Italian.