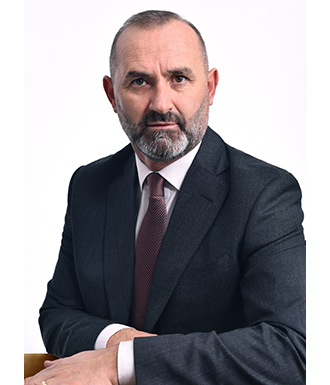 Mr. Ulsi Manja is the Minister of Justice as of September 2021, a position appointed after a long career in the field of justice, public administration and human rights.
Mr. Manja graduated as a “Lawyer” from the Faculty of Law in Tirana in 1996. Subsequently, he passed his bar exam and is also a doctor of science in the field of criminal law.
From graduation until his first election in the Albanian Parliament, in 2013, he worked in functions closely related to justice, as an assistant judge, prosecutor, head of prosecution and lawyer in several districts of Albania, such as Dibër, Shkodër, Mirditë, Lezha and Tirana. At the same time, for 10 years he has served as a professor of criminal law and criminal procedure at the University “Luigj Gurakuqi” Shkodra and two other universities in Tirana. His academic career includes a large number of scientific publications in various international journals.
Over a period of 20 years, 1999-2019, he has conducted various trainings in the country and abroad, including Poland, Denmark, Italy and Germany, specifically in the field of the rule of law, organized crime investigation and corruption, management and control of the prosecution system, treatment of convicts in the penitentiary system, etc.
In his political function, from 2013 onwards, Manja has played a key role in consolidating and putting into operation the new institutions created in the framework of the justice reform, in the capacity of as a member of the group of experts, a member of the Special Parliamentary Commission for Justice Reform as well as the function of the Chairman of the Law Commission.