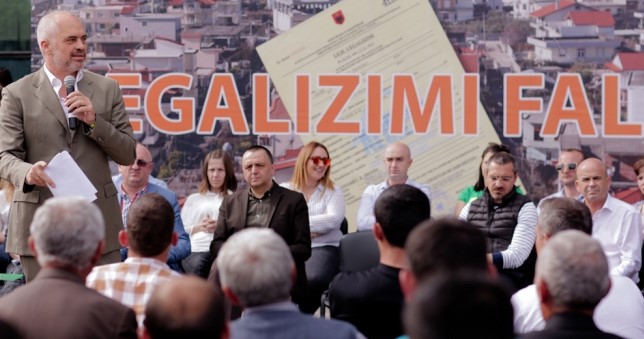 Speech of PM Edi Rama at the delivering ceremony of the legalization permits in Kamëz:

But there are no informal constructions in Europe. What is most important to understand, and which is the main reason why I attend these activities, is to raise awareness in as many people as possible so that they can understand that the legalization permit is not just a guarantee that your house won’t be demolished. The legalization permit is the opportunity given to you to transform into an ownership title all the money you have invested to build the house.

If today, the money that you have earned in 20 years of sacrifices and hard work is just dead money transformed in bricks, mortar, tiles, windows, the moment you register your house with IPRO, that money is not dead anymore but it becomes a value, a capital that you and your family own and which you can use to obtain a bank loan to launch a small business, or to expand the existing business, for a small farm and so on.

Legalizations are economy. An informal house is just a place to get out of the rain, of the cold weather, a place where you can sleep and eat, but a legalized home is a capital; it is an important value in the hands of your family. For this reason, legalizations are a very important incentive for everybody’s household economy. We don’t have yet the culture of how to deal with these capitals. Many people don’t have even thought that the money they have invested to build their house are a value they can put into motion, so that they can have a bank loan. I am sure that this process will provide step by step more energy to the household economy, to all those who legalize their houses and their businesses.

Shortly before we delivered the legalization permission to a factory that produces for many famous international firms such as “Benetton”, “Max Mara” and so on. The moment the building is legalized and registered with IPRO, its owner can obtain a bank loan to build another warehouse or launch another business, and so on.

A total of 538 legalization were made in Kamez from 2006 to 2013. 538 legalizations in 7 years. And the worse thing is that most of these legalizations – approximately 21 thousand legalizations were made across the country – 80% of them were for bars, restaurants, hotels, motels, warehouses, swimming pools, all of them legalised mainly in very neuralgic and very important spots for the cities, for inhabited areas, and they are now properties.

I was informed today that in order to vacate the yard of the hospital of Elbasan occupied by illegal building, we need now to expropriate them – as if they were owner who have inherited the land from their ancestors. They’ve build coffee shops in the hospital yard.

Instead of legalizing the houses of the people who embarked this great adventure in order to live better, they focused on legalizations for business. Of course, you understand better than me that off-book money has been paid for these legalizations.

Today we add another 1001 legalizations to the mountain of files in Kamez. I believe you are witnesses to the fact that you didn’t have to go to ALUIZNI and wait there in line as you used to do in the past, but the ALUIZNI employees came to you. They’ve helped you fill in all the forms, after they did all the measurements, and so on. And you haven’t paid any cent for this procedure as it was entirely for free.

In addition, where the house is on a state plot, we don’t get anything for the land, and if the land has an owner, there is a fee but it is 50% lower than it was in the past. This fee goes to the fund for the compensation of the owners, so that the next generations won’t be able to claim anything. Owners are compensated legally, and the house they have built with hard work and sacrifices definitely becomes their property.

We have lowered also the respective bill for the land for those who applied for legalizations, provided that they could prove that they have regularly paid energy for a year. This has been one of the most successful measures we have taken. This has stimulated people to pay for energy instead of paying for the parcel. So they save something from the parcel bill.

Today, ALUIZNI makes also the application to IPRO. You will receive the legalization permit and take it to the IPRO. You don’t have to go there and beg and wait long hours. This process doesn’t always go smoothly, but at least the interested person is assisted by the state.

Another 1001 free legalizations were given today in Kamez. After waiting for years, thousands of people are now legal owners of their houses.

Kamza is the country’s largest informal area, which includes an infinite number of illegal constructions started since 1991-1992. Because of the size of its area and its density, ALUIZNI has set up two other offices in Paskuqan and in Kamza, except for the department of this area. After three years since the start of the process, Kamza counts 5449 free legalizations, compared to only 538 legalizations made in the 8 years of the previous government.

While receiving the legalization permit, Ardian Suçi thanked the director of ALUIZNI in Kamez. Being Ardian a right-wing voter, the PM tells him jokingly: “This is our job. We work for you. You vote against us, but we work for you. This is how we have shared the tasks.”

Just like in other cities, the houses of worship have also been legalized. The Tirana-Kamza Metropolitan Archbishopric and a Mosque along with its social and cultural building received from the Prime Minister a free legalization permit. The Prime Minister promised that the legalization of all religious temples in Albania will end soon. “There are 1028 temples, churches, mosques, masjids in Albania, that don’t have documents. They are old, they’ve been burnt, destroyed, and rebuilt. Sali turned some of them into warehouses, etc. Some are new. We found all these assets of the religious communities that were not legalized. We legalized almost half of them in a very short time, and very soon we will legalize all the religious temples in Albania.”