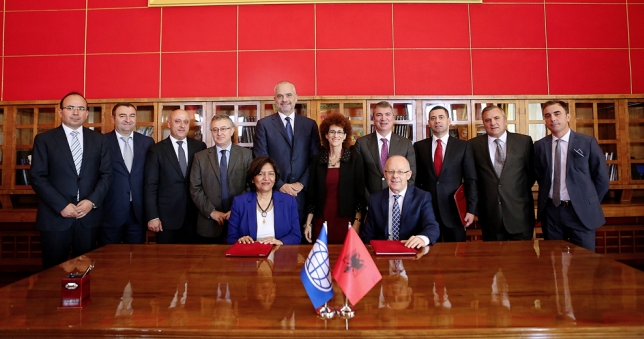 The Government of Albania and the World Bank signed today the US $ 150 million package for funding the project on energy sector recovery.

The project consists of four components. The first component of 30 million USD supports KESH to meet the needs for electricity. This component aims to guarantee in a short-term sufficient amount of energy for the next winter in order to meet the needs of the regulated market, while in the medium term, this component is not expected to be needed as a result of the expected reforms.

The second component of US $ 93 million will support OSHEE in order to reduce loss, increase collections, increase energy supply through the purchase and installation of distribution system components, fund for investments in different levels of voltage and equipping them with the appropriate system of measurement. In addition, timers will be given to customers who don’t have them yet, while an improved system for issuing bills and collection will be launched, providing also training for relevant staff.

The third component of USD 20 million will support increase in the capacity of OST by providing timers and improving data center, as well as the supply and installation of an IT system for OST data center.

The fourth component of US $ 7 million goes to the project implementation and support for reforms in the energy sector, facilitating recovery of the sector, improving the management of the company’s distribution and provision of technical advisory services. Project closing date is expected to be 1 August 2019.

Talking about the purpose and content of the agreement, Minister Gjiknuri said that the aim is to turn the power sector from a sector mired in debt which is today, in a financially sustainable sector starting from 2018.

“The reforms we will aim at a healthier and financial stability, market liberalization, which will encourage increased investment in the energy market” – Minister Gjiknuri said.

While Ellen Goldstein thanked the Albanian Government for reaching this agreement, which according to her took the necessary measures to prevent a crisis in the energy sector.

“I am grateful that the Albanian Government realized the situation, understood the difficulties and took the necessary measures. Today, the loss in the energy sector is 55 billion and this is expected to go to 80 billion in 2015, if serious reforms will not be taken, which means that the government will invest this money in this sector, instead that investing it in roads and schools.”

Ms. Goldstein defined the historical problems in the power sector as lack of accountability, including the conflict with CEZ. In addition, she showed support for the government’s measures to end abuses in this sector.

“How can this sector be stable, if half of the electricity is stolen, if public institutions do not pay their energy? I am encouraged by the measures taken to end abuses in the system. The 300 KW category has always been an element that has generated abuses and its removal is necessary, in order to ensure access to the energy sector for the poor and those who lack resources”- director of BB said.

“In the “Doing Business” Report Albania managed for the first time to be ranked 41 positions up. Albania has still many reforms to do, but at least we have seen some positive developments so far, especially in the energy field. All the measures the government has taken are creating conditions for sustained growth and fiscal stabilization of the country. In the last 14 months we have seen progress in Albania’s main priorities. Many things have been achieved, but what we can say is that at this point, this is a case that can be used to go further. Albania is a country that is leading reforms in the Balkans. Overdue reforms only make greater pain, aggravate the situation and undermine prosperity. Therefore, please embrace reform today”- World Bank Director for the Region said.