Respect, gratitude and support with every available resource for the civic sacrifice 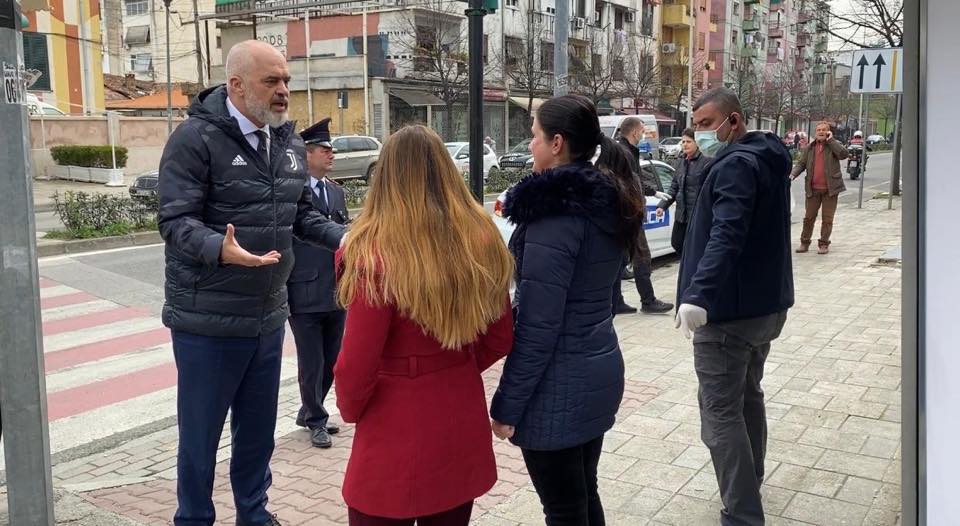 Public statement by Prime Minister about the COVID-19 situation:

I am extremely upset and dismayed by the scandalous footages showing the situation in the local market in Kombinat, Tirana suburb! These images are intolerable and they are an exemplary confirmation of the need to press ahead with tougher restrictive and punitive measures for the disobedient and mischievous individuals, preciously at a time, as I have already hinted, we are considering to gradually ease few restrictions for the overwhelming majority of people who are resisting properly, sacrificing and fully understanding all the severe restrictions on freedom we have imposed on each other.

We want to relax, though little, the travel restriction after having consolidated the online mechanism to issue permits to just one family member for shopping only. We are seeking to ease bank services now that, also due to the government’s economic plan, the commercial banks have to deal with a larger volume of services. We also want to ease a little more the travel ban, allowing more time for everyone going or coming from an authorized job and allowing them to use their private vehicles.

We are seeking to ease measures on those who have shut down their individual shops and business activities, outside the big shopping centres, of course except bars, clubs, restaurants, gyms and other commercial units where a large number of people may gather. However, all these eased measures call for a higher consciousness and responsibility of everyone, just like they require for new tougher punitive and restrictive measures for any violator of the rules. What happened earlier today in the Kombinat market didn’t actually happened last week. In other words, it is not a matter of the limited hours for commuting, as many complain, neither a matter of the limited hours for shopping, as many others also say, but it is a matter of the loosen screws of the protective chain as a result of the frivolity of certain individuals who think that the worst is over, or that the catastrophic threat which may cause thousands of death is not real!

Not only the worst has yet to come, but it can take place in the blink of an eye and take each and every one of us down, if we were to wrongfully think that this is over and we survived! And for this it would take just a few headstrong persons, disobedient and devious individuals, who might think they can outmanoeuvre the virus too, just like the outmanoeuvre those who stay on queue and respect the rules. Fortunately this is not the case everywhere in Tirana, but in the local market in Kombinat, and here and there only, yet this is would suffice to trigger a disaster that would strike not only Tirana, but whole Albania. If it was just a matter of the limited hours it would have happened everywhere, and if it was a matter of the one-hour limit alone it would have befallen everyone, and if it was a matter of failure to properly carry out the duty, then it would have become a phenomenon and we would have been set on fire long time ago! No, no, this is happening just because some people do not wish to understand!

What could possibly something worse when someone is unable to bid farewell to a beloved family member, but unfortunately, just like everywhere else in the world, in Albania too, funerals, both religious and non-religious ceremonies, are banned, because it means that someone might come back from the graveyard with the life-threatening danger in your body as part of a chain of infected people. I didn’t share with you the horrible images showing a burial ceremony in Peshkopi, but do you really think that we would be able to cope with this situation by deploying policemen and imposing fines also in the event of funerals, or commemorative ceremonies on the seventh and the fortieth day after death as our tradition has it! But, perhaps we will be forced to go that far, because people unfortunately infected each other during a funeral ceremony and gathered again on the seventh day after the death. I pray God that the all recover and God forbid it that a death causes more deaths! But this is how this war is!

When we imposed the limited hours of travel we anticipated that the measure was to extend until next Monday, i.e. the day after tomorrow. However, we are forced to postpone the measure at least for some more few days, because we should first understand and let everyone learn that the worst is not over, quite the contrary the worst has yet to come! And this is not a matter of timetable, it is not a matter or rules, but it is a matter of mindset that hasn’t changed at all for some!

Tirana, Durresi, Shkodra and Fier could turn into our Waterloo if we are not to tighten the screws of our protection and defence chain. Here it is the plan we are preparing and will become a law very soon and will be then translated into an escalated action according to the dynamics of the war. As a start, we will prolong the limited hours, but at the same time we will stiffen and adopt extra penalties and for repeated cases the measures may go as far as to the imprisonment of the violators of the time allowed for shopping, which we can extend a little more, so that we no longer receives complaints from those who claim that this time is very short. Then, according to the war dynamics, we will gradually allow the use of private cars during a longer time-span for all workers in companies and enterprises operating in legally permitted activities. However, the relaxed measures will be accompanied with an increase in sanctions and penalties, including imprisonment, if the car is instead used to transport other people, just by taking advantage of the permission to go to work by car. Later, we will also allow shops in the shopping malls to open, given that they equip their employees with face masks and gloves, while strict service rules will be imposed and violation of these rules will lead to punishment, sequestration of goods and even imprisonment of the violators.

Let all entrepreneurs operating in these activities start preparing to be ready to protect the staff and customers at the moment when their shops open according to the rules that will be imposed. Over the past few weeks, it has happened that the state police have caught and imposed fines and have closed bar-cafes, where coffee and brandy are offered to those “bravest in the neighbourhood.” There are sporadic cases, but they are so many if we are to consider the nature of this war and they would suffice to bring about a catastrophe as they contribute to the spread of infection that then becomes endless chain. So we can no longer and will not allow that the sanctions include closure or fines against the violators, but their case will be referred to the prosecutions asking for their imprisonment as perpetrators of criminal actions at wartime.

I am very sorry that we are forced to further escalate and toughen all these measures, so that an absurd minority does not become a serious threat to the overwhelming majority, which we should help and offer as much relief as possible, because it is completely aware about its fight and exemplary resistance. We can’t lose this war just because of the easygoingness and negligence by those who still refuse to obey and we can and we will absolutely win this war as we have so far demonstrated to whole world that the tiny Albania, despite its deficiencies, is capable of making a success story that will be long remembered, thanks to its people and government that is leading this fight.

A number of patients have recovered to date and this is a reason for more optimism, compared with other countries, in the end of an exhausting day. But while we increasingly move towards the peak of the war, which has yet to happen, we should never forget, even for a single moment, that the war toll is made at the end of it and no game can be won before the whistle is blown. So, until the final blow of the whistle, we should keep on resisting in this strong defence and support each other, while let the whistle be blown increasingly by all irresponsible saboteurs of this struggle which is a matter of life and death and from which we have the obligation to emerge proudly before each other and before the future generations that will speak about us.