March 7, a milestone in 30-years of Albania-Italy history 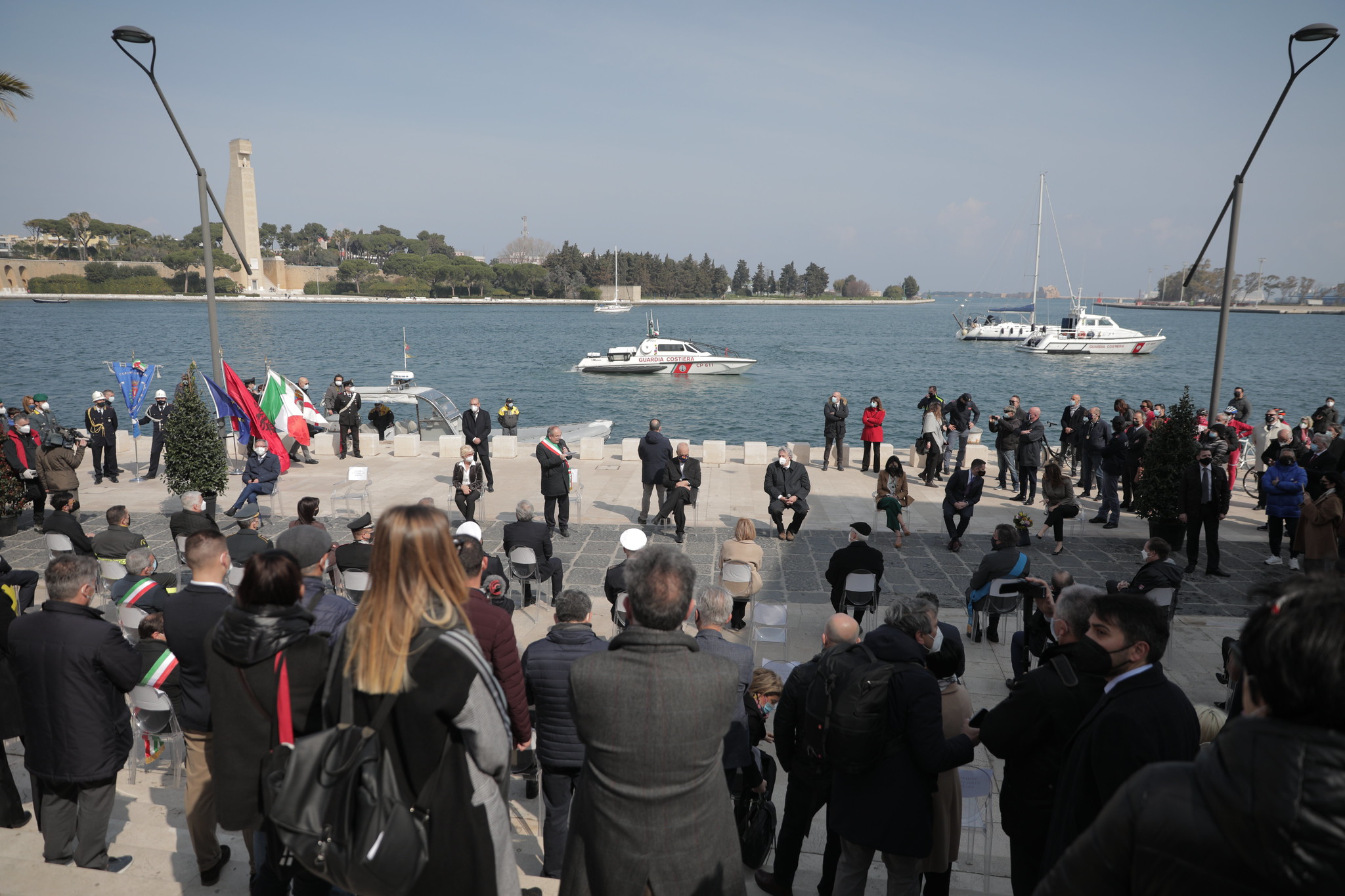 Prime Minister Edi Rama remarks at meeting with the heads of the communes of Brindisi province:

Thank you each and every one of you here and for this exceptional welcome and many thanks also to the Mayor who took these measures. The sun is also shining on this day that, in my view, is a very important day, not only for Albania, not only for Brindisi province, but also for the mankind history in this region of the world and the reaction of the Brindisi community sets an example of humanism for everyone and an example that should be told everyone that is not the fear or something else, but the love for one another and the love for others that ensures the future of our children.

I didn’t know about this medal award thing and I came across it just now and I know we can’t take measures with our medals, but I would like to say that we now want to turn this date, March 7 into date of mandatory working visit of Albanian government to Brindisi to express the eternal gratitude and make sure this is history is always remembered as a very important one both for your and our children, who would have to live in the Europe of the future and if don’t remember what their fathers have done, they will be doomed to repeat it and, on the other hand, March 7 in Albania marks the Teachers’ Day and I believe that on that March 7 Brindisi has actually become one of the greatest teachers of the mankind and symbol of true solidarity, not the solidarity usually found in the beautifully-written political speeches or preaches that end as soon as the camera goes off, but solidarity of ordinary people who demonstrated on that very day that it is the politics which sows fear and not the ordinary people. The ordinary people are not the problem, but the politicians who spread fear and hatred.

I hope the municipality of Brindisi will provide us the opportunity to be granted a space of whatever the size, a small space to house a museum of ours in honor of this history, a museum which I believe should be visited no not only those living in this city, but by many other visitors. I would like to underline that it sounds almost incredible. I say almost because we have been through that history and if not it would definitely sound incredible and unimaginable that in 30 years only, which are a lot in the man’s lifetime, yet they represent just a moment in the life of a country, which has changed so much over these years.

Albanians arrived on that day with their thirst for freedom, but also hungry, as their voyage was extremely tough, yet they kept moving forward to progress and then the period ensued when they were hungry for their residence permits and become legal citizens of this country and slowly but firmly were integrated in the country’s daily economic and social life. There are almost 50.000 small and medium enterprises run by Albanian citizens in Italy and they now want their social contributions and pension rights recognized. In other words, this is a problem we need to address with the Italian government, but it represents a point of arrival along a 30-year-old history, where those who were once seen as aliens coming from a completely secluded and isolated world are now fully integrated and a respectable community in this country, where we have always felt ourselves home.

While coming here, I saw the microphone of the Antena Sud. I didn’t know it is still operational, but Antena Sud was a very important name for us during childhood, as it represented a window to a world that was forbidden to us. We couldn’t watch neither RAI, nor any other TV channel but the Albanian state television in Tirana, since signal jamming devices were installed to intentionally block their signals. However, whenever we went on holidays to Vlora, Antena Sud was one of those windows, it was truly our cinema, our moment when we felt part of the world, when weather was fine, because otherwise the signal was weak and we couldn’t watch Antena Sud TV channel. Later, when we somehow jumped of that window to arrive here, of course the reality was pretty different from what we could perceive from the RAI images and MEDIASET in particular. However, we are very happy to be this country’s citizens with full rights, living and working in this country, and we are very happy to see many Italians coming to Albania, working in Albania, to see Italians studying in Albania, and I very much hope that we can do a lot more together and I very much hope that this so to speak a marriage baptized by the sea on March 7, 30 years ago, and it will be a happy marriage forever.

Again, thank you everyone and I would like to conclude by pay tributes to a person, to a man who probably just happened to young Mayor of Brindisi at that time, but it took just a day to become part of the history of Albania and a man whom Albanians will never forget. He is Mayor Marchionna, who should be hired by the Italian government to deliver private lectures to the Italian politicians, who are eyeing to rule the country and who are somehow obsessed with the boats. He should give them swimming lessons and boat rides so that they can defeat their fear and obsession with the boats. Boats do not cause the end of the world. On the contrary, they provide the opportunity for the world to open to others. Thank you!

– You said you would wish to institutionalize this date. Could you explain how?

PM Edi Rama: We want to turn March 7 into a commemoration and reflection day, without bothering anyone here, we just want the Albanian authorities to come every March 7 and do exactly this: expressed gratitude and communicate with a view into the future.

–What about the museum?

PM Edi Rama: Yes, through the help of Michelle and the Brindisi municipality we will hopefully secure a proper space, not a hugely colossal one, but a space enough to house a museum in honour of the Brindisi citizens and I believe it would become a sort of address for the kids to see and learn what their parents have done years ago and make them feel proud and follow their parents’ lead, because this is history of Italy, it is the history of mankind.

–Any personal memory of an event from that time?

PM Edi Rama: Nobody has a beautiful memory from that exodus. What makes that memory beautiful is what Brindisi, Puglia and all Italian citizens did and what Albanians themselves did by becoming citizens who possess all the rights thanks to their hard work and their dignity. This is the most beautiful thing. I recall those images, which are painful images of sufferings, the beginning of a film with a happy end.

– Which is your message to Brindisi citizens on this special day?

PM Edi Rama: I would like just to express a profound gratitude to all of those present here on that day and those who opened their homes’ doors and their hearts to the desperate people, who “occupied” this city and I would just like to pay tribute to each and every one of them. Who am I to convey messages? I just want to thank them.

–What about the role of the politics? So that the politics is no longer obsessed with the boats, as you said a bit earlier?

PM Edi Rama: I think that politics in general should not tend, so should not capitalize on the people’s fear and should not grow by inciting fear, because people should see politics and should see hope, and not hatred and fear. This choice should be clear, according to me.

– You are an eyewitness of the landing…

Michele Emiliano, President of Puglia region: Yes, I was serving as deputy prosecutor back then and I was on my way to work and I found myself being hugged by hundreds and thousands of people, who were overcrowding whole area on the road to Brindisi. It is a day to be always remembered and be stuck in mind, as the Premier Rama said, and which had a positive finale despite chaos and the anxiety during those hours. After all, I can say we have done something beautiful for both nations and people.