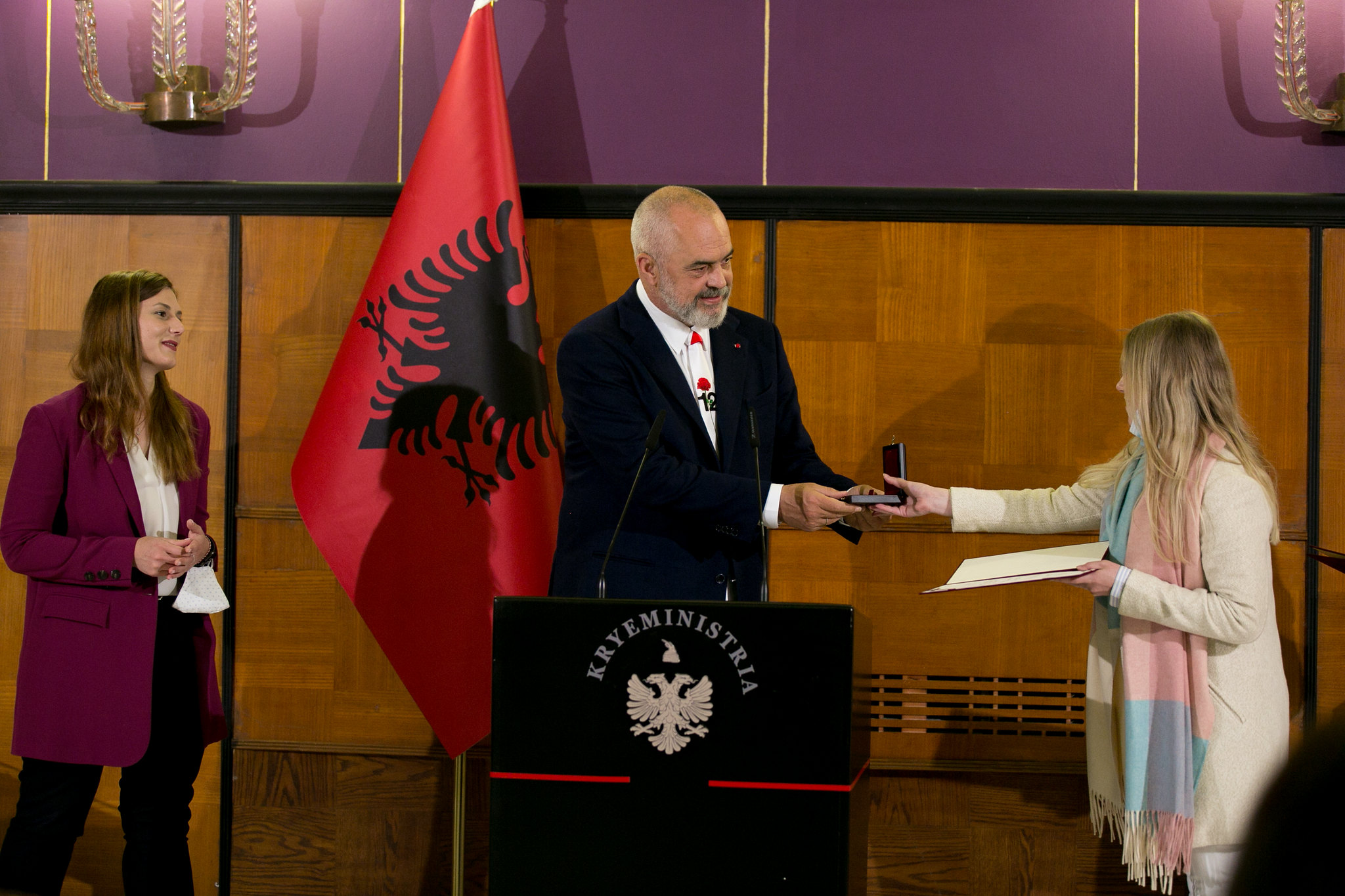 Someone once came to Mozart and told him he wanted to write a symphony.

“Why a symphony?”  Mozart replied. “Start by writing a sonata.”

“You were writing symphonies when you were 10 years of age,” the man said.

“Yes, but I didn’t run around asking people how to do it,” Mozart told him.

Today, in front of you, it is with great pleasure and honour to address the best and most beautiful part of our society, the boys and girls who don’t limit themselves and their imagination and don’t resort to 100 or more excuses of all sorts, but instead become successful.

I am very happy that together with the Minister of Education we can award the Gold Medal, which will be preserved as an indelible token of pride in your and your parents’ lives, as well as a token of great confidence nothing is impossible, when a man is determined to make a daydream come true.

It wouldn’t be superfluous if I were to remind Ermonela Jaho’s example today.

Ermonela Jaho was an Artistic Lyceum student, who had nothing else, but her dream to become an internationally acclaimed artist and ascend to the top, where she now excels and shines as a great special star on the sky of the world’s opera music. She came from a poor family and not only that, but her teachers didn’t single her out among other girls at the Artistic Lyceum as the artist, who would excel on the world’s music stage, but simply saw her as a girl with strong will, who talked about her dream that sounded laughable and preposterous to everyone. Ermonela Jaho told them she would perform at La Scala one day. Going beyond even the most optimistic predictions about her talent, she succeeded not just to perform on the stage of La Scala, but also on the world’s most prestigious stages. She is now fighting to set another record as the celebrated artist who would break all age limits, even though she is a young woman, but I believe you know that competition is fierce in the opera world, in the soprano career and there is a time limit to be on top.

Just imagine how many girls are born with the gift to climb on top and how small is the stage’s space for all countless number of talented artists.

One day I had a conversation with Ermonela and I was spellbound to learn how many hours of physical training it took for Ermonela and I was amazed by the way she told me about the deep muscle workout that she has practically invented herself by cooperating with famed trainers and she is still on top of her performance.

It is a daylight dream, yet a dream one can make it come true. And everyone dreams big. Yet what makes the difference is the power of character, the strength to withstand exhaustion, to recover and emerge stronger after going through disappointments, leave behind all the winds blowing against you, to rise after falling and be prepared to be defeated and not see the defeat as the end of the world, but as the opportunity for a fresh start.

I would like to extend today my appreciation to each and every one of you, not just for the matter of formalism, but also for a very simple yet quite important reason. I am convinced each of you has his or own different story. There are girls and boys among you, who come from modest families, if not from poor ones. I will never forget my visit to a family in Postribe; a visit to a very poor family, with the family head being a young man, who worked as cart driver to provide for his kids, who, believe it or not, used to study inside a room, whose roof leaked when it rained and they opened an umbrella when doing their homework. And they all excelled. His daughter was actually one of the best pupils in Albania, who used in that village and used to walk a long distance to go to school.

Many others like you have had the opportunity and the right to find all sorts of excuses not to be the best performing ones. And of course, they have been all reasonable excuses. But you didn’t seek excuses, you didn’t believe for a second that your dream can be sacrificed against the backdrop of the conditions against many of you, as there are surely girls and boys here, who live in optimum conditions. This is why you are so much more than what you are to yourselves and your parents. You are so much more than that, because you are a ray of inspiration, hope and faith for others, including me.

Though it may sound quite strange to you, but at times when I need to find reasons to resist, I always remember that girl there in Postribe, I recall Ermonela Jaho, and many other examples of people, who have succeeded right where nothing has been in favour of their dream. Talent is a God gift, but it is the humans, who decide whether their talent will explode or it will remain just a flame that simply fades away in the process and is extinguished by the fire extinguisher of excuses.

A big applause and I wish you won’t forget everything you have done and the hardship you have been through. Just remember the difficulties you went through and whenever you are face a new challenge and you deliver on another accomplishment, remember that it were not the results to reach you, but it were you to achieve them. Whenever you feel in trouble, whenever your mind tells you “it’s hard”, just recall and remember your parents, remember yourself, remember the moments when you breathed freely after a great effort you reached where others failed and keep going.

Keep going since nothing is impossible on the long path of efforts to make a daydream come true. Watch out for the dreams with your eyes opened, because they can send you to a completely unknown direction. While the dream with your eyes open is there for you and it doesn’t happen accidentally in the eyes of your imagination, but it happens for a reason, telling you are specifically born to make it come true, but it is up to you and certain individuals, since everybody else would otherwise succeed.

I want to express my deep gratitude also for the power of your example. The reason I wanted to share with you this long-awaited moment is so that everyone watching us can follow your example. There are many other girls and boys, who can become like you, but they need your example to do so. Of course, there are also many cynical, who would again find all sorts of excuses, but world is not theirs. The world belongs to the courageous and brave people, those who persist and the world belongs to the stoical and uncomplaining. Everyone has a place in this world. We are all temporary in this world and we all leave it one day, but there are many ways of journeys through this world.

Vaclav Havel used to say: “It is not the station, but the way you made it to there that distinguishes you.”

Referring to the story –  I guess you all know – about Odyssey’s quest during his journey home to Ithaca, a lot of books and poems have been written, but the message is that it is not Ithaca, but the journey to Ithaca what gives man the inspiration and the opportunity to leave his traces on this world.

I am sure you have happened to hear a lot of your peers describing you as the mom’s boy or the daddy’s girl in the sense that you never failed to do homework in a certain subject and do everything to deliver on your accomplishments. And you will certainly encounter a lot of people, who wouldn’t want you to become successful, people who would become fiercely hostile because of your success. Don’t forget what Faik Konica has once said: “Albanians can forgive you about everything, but your success.”

Keep resisting and moving ahead, because the world will be yours, not of those you would encounter on the street, those who oppose you in your workplace and in your life, and will seek to hinder or ridicule you. They are individuals whose legacy would last as long as the wind lasts. You will leave them behind by virtue of your example, many reasons for others to face excuses, overcome excuses, and ascend to the same peak you are heading to. Be fully confident!

I am one of those to be blamed for this delayed medal awarding ceremony, because I told the Education Minister this is impossible, when I came across the certificate. The Gold Medal is a gem we can’t with diamonds and gold, yet it should resemble to the medals we award to those who are proclaimed as “Honour of Nation”, and those we are evaluated for their career and heroism. That’s why it took some time for us to prepare these medals for you.

Thank you so much!