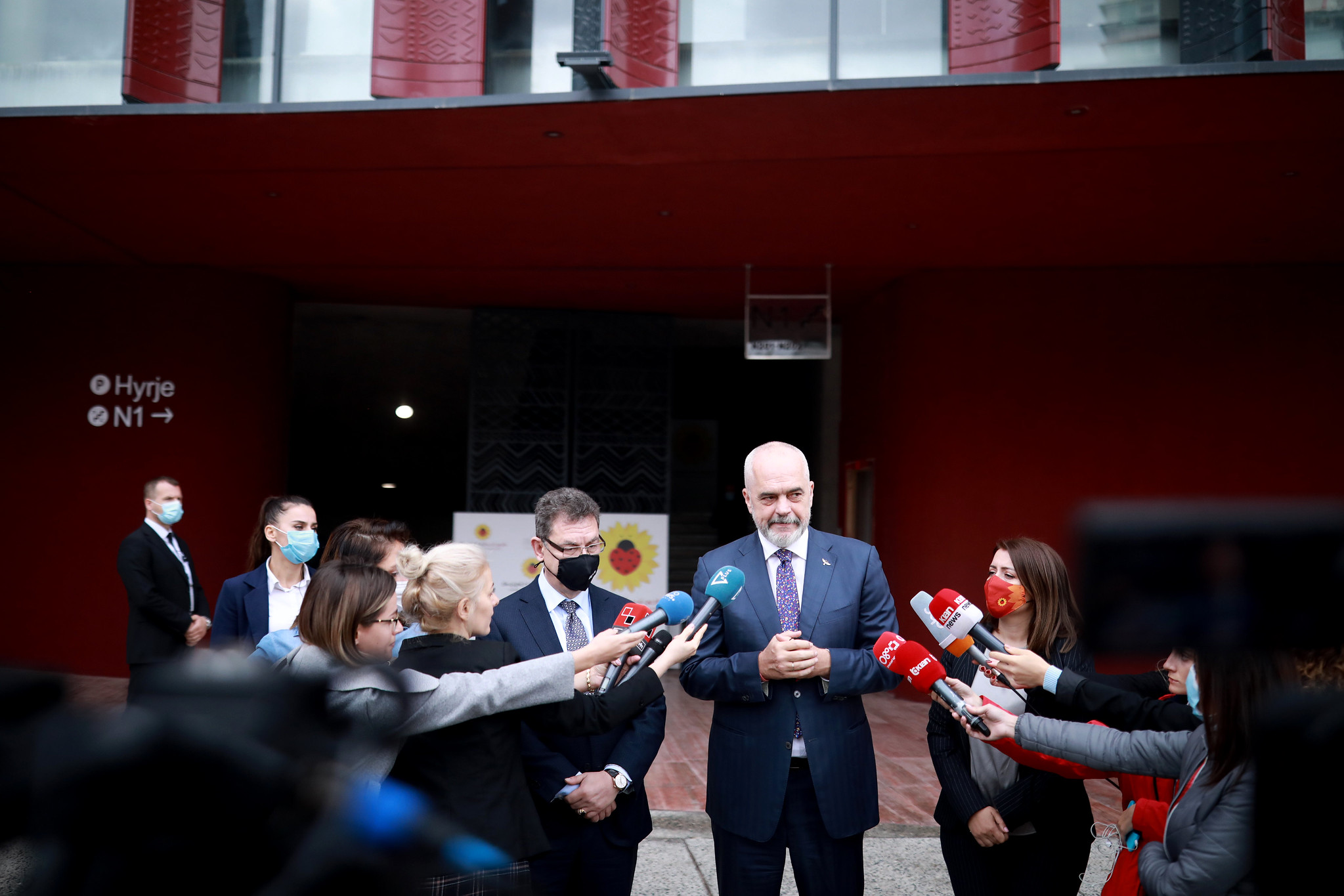 Prime Minister Edi Rama today welcomed the CEO of pharmaceutical company Pfizer, Albert Bourla on a visit to Albania to closely inspect premises at Mother Teresa University Hospital in Tirana where the COVID-19 Pfizer vaccines are being stored and ensure continued vaccine deliveries as country is delivering on its mass coronavirus vaccination campaign.

Following their visit to the University Hospital Centre, also accompanied by the Minister of Health and Social Protection Ogerta Manastirliu, PM Rama and the Pfizer CEO also toured the vaccination site at the Air Albania Stadium in the capital, where vaccine rollout is underway. A shipment of 500,000 doses of Pfizer vaccine is scheduled to arrive in Albania by mid-October, while a new contract is in sight with the pharmaceutical company next year.

In a brief statement to the media, PM Rama and Pfizer CEO Bourla said as following:

PM Edi Rama: Today is a special day in the COVID-19 vaccination process, as we have the honour and pleasure of welcoming the Pfizer CEO, who, I would be honoured to note, has already become a friend of Albania. He opened the door to us at a very difficult moment, when we travelled to New York to knock on Pfizer’s door, at a time when we lacked any clear perspective after none of the countries in our region were included in the initial vaccine delivery scheme. We had a long conversation in New York and although he didn’t promise to address this issue right away, he pledged to do whatever it took to tackle it and thanks to Mr. Bourla’s personal commitment we succeeded in procuring and securing the vaccines sooner than any other country in the region.

Therefore, I would like to publicly express him in person what I have repeatedly expressed either here or in our meetings, the most profound gratitude for his help in protecting our citizens’ lives.

* Pfizer CEO Albert Bourla: I want to thank the Prime Minister primarily for the honour he is doing me by being with me today and for inviting and having me in Albania. I knew of course the Prime Minister, because is a well-known leader, not only in Albania, but also in the Balkans and Europe in general, but I had the pleasure to meet him in person last year early in the pandemic, when he volunteered to come to New York to discuss the vaccine supplies to his country. I was impressed because it was a time when no one was visiting and travelling. It was a very difficult time and I offered him that we could have a video call, but he said: “I want to meet you in person.” And I truly appreciated that. Then we opened the offices in New York so that we could have this meeting.

It was very clear that not only he cared about his country, but he also had a plan how he could get the vaccinations done. That for me was extremely important, because I understood that the vaccines that could go to Albania would be administered to the citizens and I was very happy that eventually we were able to help Albania. I am very impressed with the Prime Minister’s leadership. Since the first meeting, we have met again. I also want to say that I feel your friend and it is a great honour for me. Of course, I will never forget the gift that you gave me, a panting you did yourself, and which I have in my New York office. Thank you very much!*Përkthim simultan