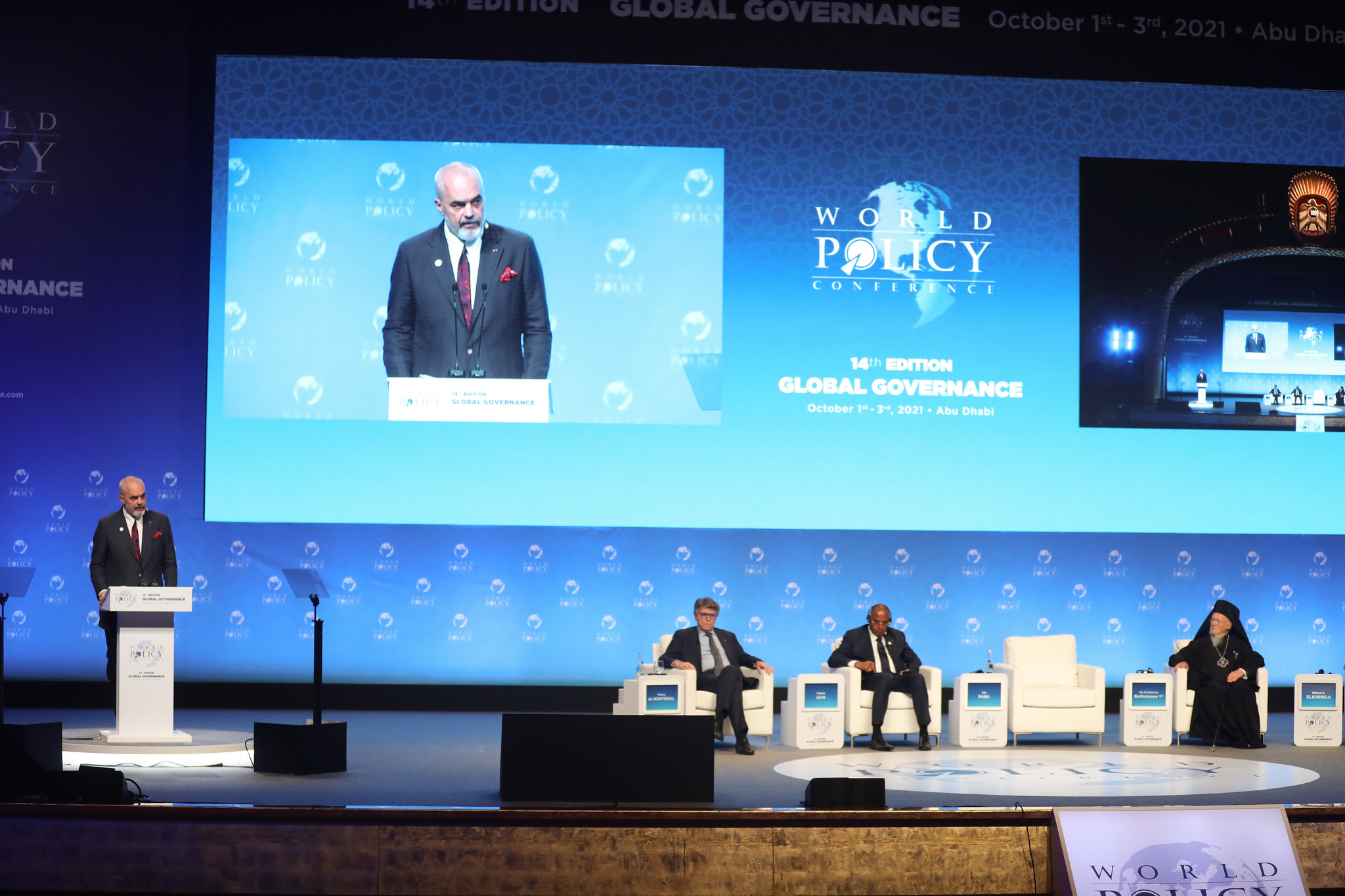 I would try to resist the temptation and fulfil this need without being boring and I hope for your patience to have a certain success.

I very much believe that the globalization is here to stay as long as we live in the same planet, as long as we are warmed under the same sun, as long as dependence on deepening our interconnections has become unstoppable.

Our genuine interest in beyond the borders cooperation is growing bigger despite the reluctances and rejections and multilateralism is and will remain the instrument for cooperation.

The problems we are dealing with today are increasingly more inter-related. Let’s us consider the climate change and, by the way, you all know that global warming is not just a climate issue; it is a development issue, it is a security issue, an issue that affects the strength or the weakening of the world peace as a whole and peace in various regions. It is an issue with a long-term impact. Therefore, the more effectively we deal with it, the better to prevent the natural disasters, fires, floods, prolonged drought, rising water levels, loss of land etcetera.

The COVID-19 pandemic of today, a global issue, has taken so many lives compared to the losses in the world wars. Are we able as isolated nations to fight this plague of modern time?

We saw it and the answer is of course, we are not. The same logic, in my view, applies to the security issue, the fight against international terrorism, the cyber war, to the drinking water and food supply to all, to the goals for a sustainable and long-term development with the aim of leaving no one behind and so on and so forth.

At these times of global challenges, which are also times for trust challenges, a global approach is required. The commitment of all of us within the structures we have set up is required. And for sure, adapting these structures to meet the today’s challenges is a must and not in a homogeneous but rather in a harmonic way, I might say.

Albania believes that the renewal of a profound commitment to impact this multilateralism is more necessary than ever before for us to deliver on peace, democracy, the human rights and development. Within this frame, we strongly support the vision and the ambitious reform agenda of the United Nations system and that of the Security Council as well. With a firm commitment to the principles of multilateralism, Albania successfully chaired the OSCE last year, providing a lasting contribution to peace, human rights and equality.

Under our leadership, the OSCE Ministerial Council agreed on several new commitments on combating transnational organized crime, countering corruption and preventing torture in the OSCE area. We delivered much needed progress in all dimensions of the OSCE security and as a believer in multilateralism at a global level, Albania will for the first time in its UN membership history be a member of the UN Security Council for the term 2022-2023. Fully aware of the responsibilities trusted upon us by the United Nations family, we will bring to the Security Council the perspective of a small country, with a constructive foreign policy and a consistent commitment to multilateralism. With a group of like-minded people we have undertaken to launch a treaty against the pandemic, in order to face successfully such costly pandemic situations.

We are also concerned about the negative consequences of the infodemic in the context of COVID-19, which can heighten the risk of conflicts, violence, human rights violation and the mass atrocities.

We are in a full track with the European Union’s policies and the international documents and the decision to develop the energy sector in full harmony and friendly with the environment.

The Albanian government has started to reform its power sector since 2014 through actions undertaken to complete the legal and regulatory framework in compliance with the European Union’s third pacage on energy  and in full compliance with the EU directives on energy. We are focused on diversification of the power generation always based on the renewable, like water, sun and wind. This will definitely reduce the country’s high dependency on the weather conditions as currently almost all the production is based on hydro sources. The government is developing the new national energy and climate plan according to the new policy guidelines and the energy community agenda on decarbonisation in the energy sector. This plan projects power generation based on the domestic installed capacities for the period 2021-2030. So Albania is expected to become a net electricity exporter within this decade. However, talking about the challenges of our times in this city, I can’t avoid speaking about the role model of the United Arab Emirates regarding peace, multilateral cooperation and human solidarity. The signature of the Abraham Accords between the United Arab Emirates and Israel was a shockingly positive development of discontinuity with ages of a stalemate of one of the longest and deepest conflicts in our world, undertaking a huge step towards reaching out to the historical enemy. UAE lead by example towards a completely new direction of addressing the future, not by forgetting the past, but by looking forward to the future. And by doing so, making the future the basis of dealing with the past and not let the past anymore dictate the future. This major development in the history of peace-making is a true source of inspiration for the world, as well as for us in the Balkan region, where so for a long time bloody wars and conflicts have prevented people of different nations from seeing themselves as humans and deal with each other humanely.

On the other hand, we in Albania have experienced first-hand the UAE human solidarity in the aftermath of the devastating earthquake in November 2019, when 15,000 families lost their homes in less than a minute. His Highness Sheik Mohammed bin Zayed was among the first among a vast number of international leaders, who expressed their solidarity, not just through words, but also through their deeds and thanks to Him and the government of UAE a brand new residential neighbourhood is being built for the families that lost everything in that tragedy.

I am very proud to conclude my speech by telling you that Albania stood strong in protection of the Afghan people at risk following the course of events in Afghanistan and the spirit of solidarity I talked about a little while ago, Albanian government took right away the decision to host up to 4000 Afghan citizens in Albania. It is a very big number compared to much bigger and richer countries, whose contribution didn’t reach the bar of the challenge. During all these days, many people have asked me “why?” And my answer is very simple: first of all, by doing so we honour our history and our tradition. One of the most beautiful pages of our history has been the salvation of Jews during World War II, when Albania was the only country in Europe with more Jews after the war than before it, because not a single Jew was handed over to the Nazis.

Secondly, we may not be rich, but our memory can’t be short. We were the Afghans just 30 years ago, when leaving our own hell, escaping our own Taleban, who were not Islamic fundamentalists, but they were fundamentalists of Stalin, back then we had to cross the sea and appear on the shores of Italy and Europe like aliens of which nobody knew how we looked like. And if we were not to be provided sheltered and given help and hope 30 years ago, we wouldn’t be here today, a country with the EU candidate status, aspiring to become one of the Union members.

And thirdly, and probably most importantly, we did it because we owe it to our children. They shouldn’t be raised in an environment, where they are told to shut the door, to live in fear, and to turn the back to those in need. They should learn by deeds, not by words, that in this life there is a time to ask and there is a time to give. Thank you very much!