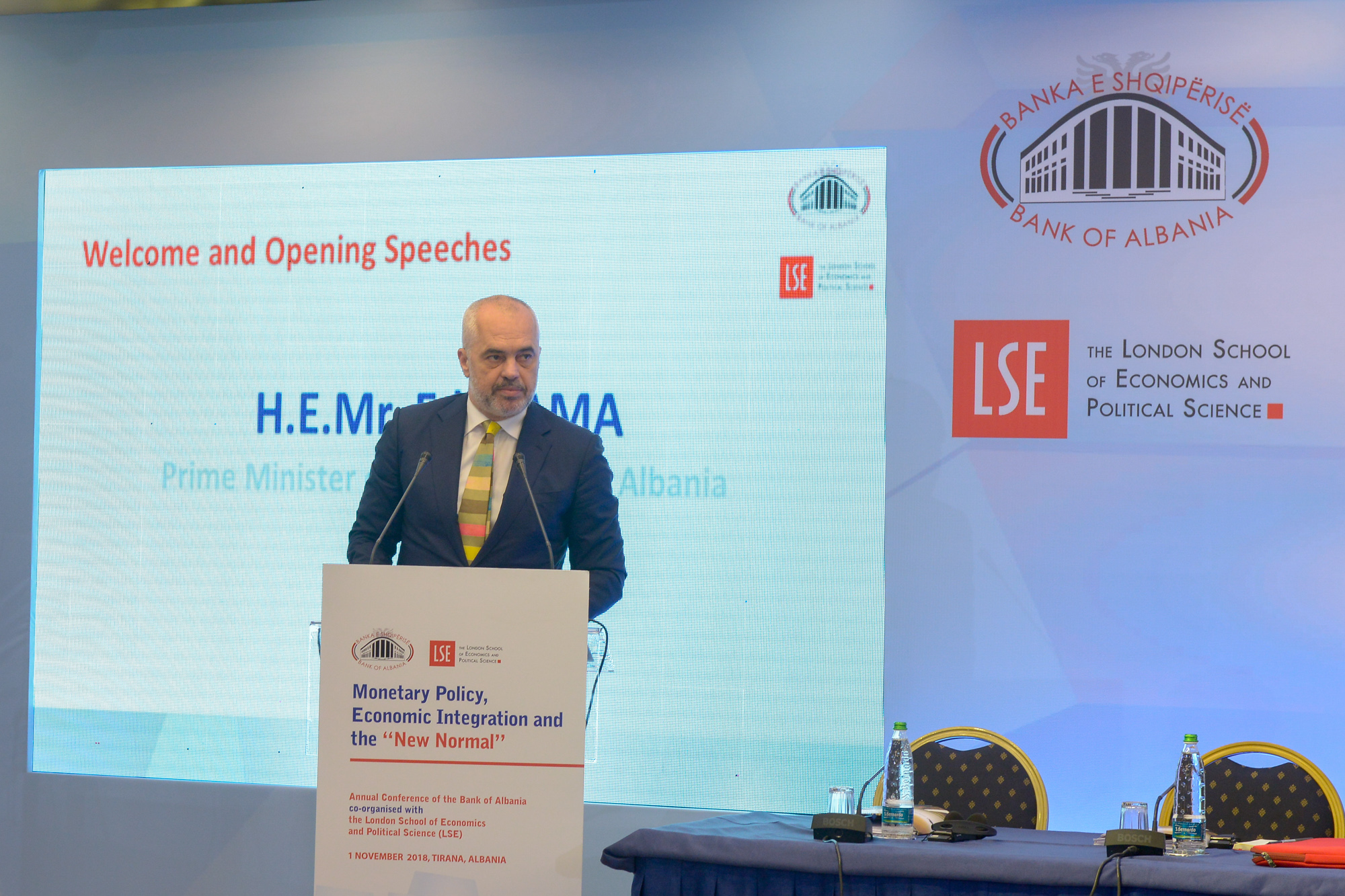 With your permission, I’d like to first express my pleasure of seeing several good friends of this country, who have assisted and accompanied Albania during an extremely unique process, hence the transition from dictatorship to a functioning democracy, and are attending the Bank’s annual conference today. I would particularly like to greet you, Marek Belka, one of the brightest minds who have been advising the Albanian government in the past, as well as Mario Bleyer, who has returned to Albania, and our friend Erik Berglof, who has returned to serve in another capacity after having been a valuable contributor for many years whenever he has been asked to provide his opinion about our challenges.

Exactly 50 years ago when the European Union had just been established and still had to show the excellent results of the half century that followed, the Sweden’s Central Bank Banka hosted back then an international conference about exactly the same question we in Albania ask ourselves today; “The Central Banks in the face of integration challenge.” The then Governor of the Central Bank of Sweden, Per Asbrink, predicted that the banks’ role would change over the years to maintain not only the internal balances, but also become the last bailout on verge of crisis. According to him, the central banks would become increasingly decisive in maintaining the global balances.

Indeed, seen in the prospect of 50 years later, this is truest nowadays, when monetary policies have crossed the national boundaries and are more than ever inextricably linked to one another.

Today, in a country like Albania, where the European integration question has been raised together with a set of criteria that should be met, as well as with whole new set of condition it creates for the country, the Central Bank needs to provide an adequate answer of its own to this question. It is a seemingly simple question, but a quite complex one in all components of the integration challenge, because, as experience of other countries that provide the clear answer to this question since they have gone through this process ahead of us, show that it is not a commonplace response moreover when it comes to an economy that has changed forever following the 2008 financial crisis.

However, what we confidently state is that the Bank of Albania is one of those institutions, perhaps the only one, radiating a constant stability throughout its existence after the fall of communist regime. The Bank has done a continued praiseworthy job to deal with consequences at certain dramatic moments and has also played an extremely positive role in dealing with the post-crisis period, being continuously a reference point to everyone.

I believe that, if not wrong, it is the only institution in this country that has never been anathematized by a party in playing politics against the other party. I think this is enough to perceive and define the Bank of Albania as an important and indisputable gravity centre, undoubtedly a merit of the team, management, the Bank’s board, successive governors, and it is a very precious legacy and we have the obligation to protect and assist it to be further enriched as such.

I won’t take time to speak about the Albanian economy, whose position and performance is undoubtedly linked to the continued central and determining role of the Central Bank and harmonisation of the government’s fiscal reform and government agenda with the Bank of Albania’s monetary policy over the past years has turned out to be successful in helping the national economy to develop further at a time when structural reforms remain our main focus.

The indispensability to ensure sustainability to the obvious and continuous economic growth remains our main challenge. The Bank of Albania represents a very solid support, but at the same time it is a very firm guarantee in relation to our government and any government that, also because of the solid and completely independent position of the Bank of Albania, literally has a more limited horizon.

I want to recall and bring something to attention that in collaboration with the Central Bank and certainly with the international financial institutions, our reform to cut the share of the non-performing loans is one of the most significant areas in the entire map of the areas we have fundamentally changed the functioning and organization of the system in Albania. Four years ago, the share of the non-performing loans in Albania’s banking system stood at 24%. Today, the NPLs ratio has fallen to 13%. I believe this is a significant example of the overall performance, but also an indicator of the cooperation with the Bank of Albania, which, I am convinced, will continue to yield positive results during the second cycle of the reforms we are launching.

The bank for Albania is a second victory, after freedom, Ismail Qemali stated back in 1913, when the newly-founded Albanian state launched first effort to lay the foundations of a national bank and I believe that the Bank of Albania, more than Albania itself and anything else, has best fulfilled Ismail Qemali’s dream.

I wish every success all the people who are the shareholders and guarantors of the Bank of Albania’s functioning.