Union of forces towards the EU 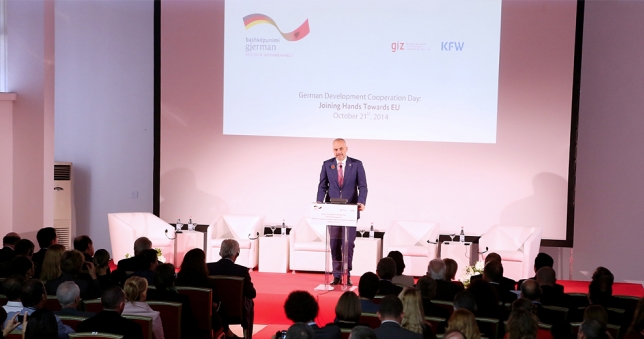 Speech of Prime Minister Edi Rama on the Day of Albanian-German Cooperation for Development:

Whenever the close cooperation between Albania and Germany or Germany and Albania is talked about, I always remember the story of a couple of Albanian-German friends whose children were perfectly bilingual and, when asked to respond about their tasks, they would always respond in German, while they would use Albanian to joke or lie. And that way, life was more beautiful.

Mr Ambassador said that Germans have a saying: “do good things and then talk about them”. While what we do is, “talk as much as you can and let things be done by themselves”. For this reason, I believe we have much to give to each other. The Germans have a lot to teach us on how to become better workers and we have the opportunity to teach Germans why they should take life easy, and teach them that life is much shorter than what Germans think.

But beyond these not diplomatic observations, I would like to say a few very sincere words on the cooperation between Germany and Albania, congratulating firstly, the author of the logo, which looks to me very much inspired by the Albania-Serbia match, although there is no drone, but the two flags fluttering together are clearly seen. And nobody is concerned for the fact that thanks to great Germany we are part of the project of Greater Europe and the joining of forces towards the European Union, as organizers have called this meeting, is really an exciting boost, because we are convinced that by joining our forces with Germany we have only to gain.

This modest experience gives us the ability to see and understand how complicated an enterprise leadership is and how much complicated the leadership’s enterprise becomes, in terms of a Europe that now seems ready to be disoriented more than ever before. Meanwhile, it seems that the guarantee of further progress to design a united Europe is just the quietly established leadership of Germany, and I believe that the special, extraordinary merit of the German Chancellor in relation to us and in relation to the region, is exactly that at a moment of disorientation and uncertainty that has gripped Europe, she gave the Balkans, gave Albanians and Albania as part of the region, a very encouraging prospect and reborn hope on the possibility of moving ahead with the European project, despite the turbulence and instability of today’s United Europe.

On the other hand, besides guiding the progress of the Balkans that is at peace, but whose peace is very fragile, Germany is at the same time a guarantee of Europe that is challenged at its own borders, from ambitions of different type, from countries that are testing in a dramatic way the strength and sustainability of open societies and of the European Union, as a large organization of open companies.

The Albanian-German collaboration, that has been going on for over a quarter of a century already, since 1988 to be precise, has brought in Albania strategic investments for over 1 billion Euros, in order to improve the functioning of the priority systems. Starting from energy, drinkable water, agriculture, small and medium enterprises, tourism and recently vocational education, all these are direct contributions of the German collaboration, which has positively affected each of these sectors. In order to understand the strategic importance of this cooperation and of the projects funded through this cooperation, just think about the projects mentioned by Mr Ambassador regarding the connections or interconnections in the energy sector, from high voltage lines between Albania and Montenegro, funded by the Federal Government through KfW, to the interconnection line towards Pristina, or other support provided for a line towards Macedonia.

I do not want other important or less important donors, whether they are here or not, to get this wrong, but today I cannot help saying, on this special day, that Germany and especially the German Bank for Development, the KfW, is a very special donor. For it is a donor who not only brings money and not only sees the realization of projects in their close framework, but it is a donor who brings a management culture. It is no accident that, if we look at today’s map of projects invested from various funding sources in the water sector, the only projects that work just as they were designed on the very first day are projects financed by the KfW. Meanwhile we have dozens of projects, which are even considered complete, from external funding, that today operate in this sector. We have processing systems of polluted water, we have aqueducts that have not been working for several years, and who today lay in degraded conditions. I would bring here a concrete example, which is very significant and that would be worth, from a cultural point of view, as a case study for all donors, and this is the transformation of the water supply system of the city of Korca, where, following the whole process I managed to understand the simple element that makes German projects successful, unlike many other projects financed by donors. For the donor, in this case, does not start from the bricks nor the tubes, but starts from the man. Starting from the man means, first of all, starting from increased capacities which, after the project is completed tomorrow, will administer the product of the project. Second, the project is entirely self-sufficient. Not like other projects that from an engineering point of view might be flawless but that do not work, because they are not connected to a functioning system and practically, they have become like those car cemeteries along the freeway that get rusty and produce only pollution and despair.

I’m very happy to highlight another aspect; cooperation with Germany is characterized by dialogue. Another reason why the projects funded by Germany and the German Bank for Development are successful, because they are based on listening very attentively to the needs and on making a very careful analysis of the reasons presented, both from our side and from the counterpart, experts of the other party, in considering the validity of a project not as an instrument separated from the whole, but as part of a chain of values.

Actually, I believe that if we did an analysis of efficiency in the use of money – but in fact there is no need for Albania to discover this – it couldn’t be otherwise that Germany is the donor with absolutely the highest efficiency in the ratio of investment and product quality.

What has made us particularly happy is the speed and clarity with which the German party understood us in the need for a new focus on vocational education. We strongly believe in the alternative of vocational education as a development alternative for the country, as a real alternative to real employment for the country and as an alternative of social balance for the future of the country. And in this regard, we believe that not only the German model, which is widely recognized as a model of success, but the culture that is still transmitted in this regard, even in this area, through the cooperation of the German party, is a very good basis to believe that we can succeed, even though we know very well the difference between the German workers and Albanian workers. We know very well the difference between a German who goes for becoming a craftsman and an Albanian who goes for learning a craft. There is no need, I believe, to comment on this any longer, and we are very clear on this. However, I am convinced that the model works and that the system of coordination of energy and coordination of work with regard to crafts cultivation, between schools and companies, and the synergy between public administrators and professional school boards, where we are now directly involving entrepreneurs and companies leaders, will surely give us results and a qualitative and quantitative boost in this regard.

Of course, it is inevitable these days to talk about football. Moreover, when we talk about cooperation with a country whose national team is here supported by a large number of Albanians, who have since long been big fans and followers of the German football team. I believe that the German national team is another example to understand Germany and to understand why Germany has always been successful. Because no matter how skilled the German players are – and Ylli Manjani can confirm this as a “sick” fan of Germany – the real star has always been the team. This is what has made Germany be always a step ahead of others, regardless of the final result. In this regard, I believe that we have much to learn from this team culture, within us, but also in the region. For our challenge is that, if we want to get closer to Europe we have to function as a team. Not only must we put a spoke in one – another’s wheel, but neither should we imagine that we can live and go far with one – another by scoring on our own net and pretending that we scored against the other. The road is extremely difficult, but without the slightest doubt, given the political support and will provided systematically over these years, and which year after year has become more and more evident to us, for economic cooperation and direct financial support of Germany that the country needs for projects, there is no doubt that the path becomes easier.

In conclusion, I want very sincerely and not formally to thank from my heart all those who, behind the shoulders of Mr Ambassador who represents them all, give life to this collaboration; all executives and experts of all groups that work with us in all these areas, to materialize a collaboration that produces increasingly qualitative and flawless results. This may seem something that should apply always and for all, but unfortunately it does not apply always and for all. This applies especially when it comes to cooperation with Germany which, for every Euro provided – after counting many times the Euros provided – requires result and by following the whole process guarantees that the result comes in the function of welfare and higher quality service to the public and citizens, who are the direct beneficiaries of these donations.

This is why I wanted to say thank you. It was the proper occasion, because  I have not been given an opportunity to directly meet all those who work by the German team here in Albania and with Albania to support this collaboration.

And, of course, I want to thank the Ambassador who, since the first day, has firmly emphasized the importance of economic cooperation, the importance of climate to give life to this cooperation, not just when it comes to projects funded directly from the Federal government through the German Bank for Development, but also when it comes to private investment, which undoubtedly deserve continued attention to be guaranteed and to have no surprises. With these words, I wish with all my heart to all those who give life to this cooperation, for continued success!

I am convinced that by collaborating with the Germans, both parties are winners. I’m concluding where I started. We have work guaranteed and Germans are sure that they will not be bored with us, but will always have a reason to laugh.