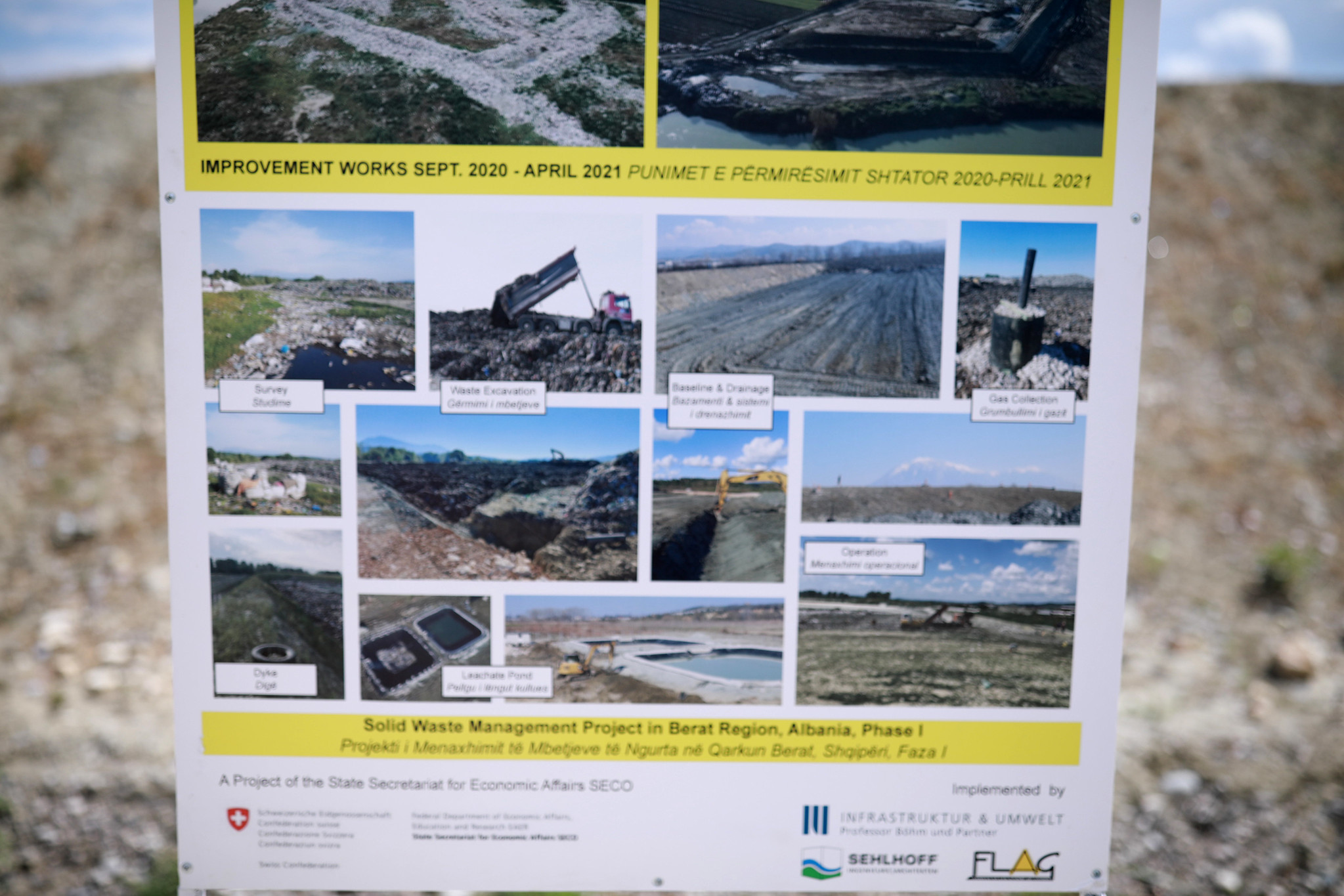 Prime Minister Edi Rama today inspected a series of important investment projects in the museum city of Berat, a UNESCO World Heritage site. Construction of urban waste sanitary landfill has just completed in this municipality with the investment allowing relevant municipal structures to operate and dispose municipal waste in line with the European environmental standards. Berat Mayor Ervin Demo described the investment as a strategic one as it heals a decades-long wound and ultimately addresses the municipal waste disposal problem.

“Taking notice of one of the most pressing issues and challenges facing the Municipality of Berat, one can say that the investment meets the majority of highest standards. We have found a solution to encapsulate raw solid waste disposed in this landfill over the past 20 years and eventually build a landfill that addresses all the needs of Berat Municipality for the urban waste treatment in the next five years at least,” Mayor Ervin Demo said.

The investment includes not only rehabilitation of the 4-ha waste disposal site, but also construction of river protection system as the disposal site was located near Osum River, which used to burst its bank during winter season, washing away a part of the urban waste deposited there.

Construction of a new road linking Berat castle with the museum city is also nearing completion and it will ease traffic to the Castle, an important tourist attraction, and it will also provide a wholly new transportation service to the visitors to one of highly-sought cultural heritage sites in the area.

“Around 90 percent of the construction work has completed. The new road itself meets all the required standards in terms of its width to allow safe passage of two tourist buses at the same time. The road further extends to the monastery, which has also become an important tourist attraction. In addition to the road pavement, the project also included rehabilitation of the walls in compliance with the stonemasonry tradition,” Berat Mayor said.

The new will provide easy access for cars from the hillside to definitely provide a car-free inner alleyway heading to the city Castle. It will significantly ease access and reduce traditionally congested traffic to the Castle during the peak of the summer tourism season in particular. The new road will also boost the value of properties of local residents, who are transforming their private family homes into small guesthouses.

PM Rama called for utmost care about every element of the project until construction of new road fully completes, so that everything is aesthetically in harmony.

Another important investment in the city is a new parking lot designed to complete the Berat Castle’s tourist offer in terms of its logistics and infrastructure.

The Gorica neighbourhood in Berat, an iconic and emblematic residential area in the museum city, is undergoing complete rehabilitation under a project to transform it into an important tourist attraction. PM Rama inspected the recently launched construction works, which, once complete, will provide Gorica neighbourhood the attention it deserves as one of the city’s main attractions.

“The investment to rehabilitate the entire neighbourhood is underway. The existing road is being widened and its section along the river will become a pedestrian street. Another car-free and pedestrians only street between the two bridges will also become an important attraction in the city. Two other important investment projects are also underway inside this neighbourhood designed to upgrade the water supply network rehabilitate all alleyways and stone walls. The lighting system will shed light on the values of the Gorrica neighbourhood,” Mayor Demo said.

The project also includes construction of green areas and river protection embankment, which has been missing in this part of the city to date.