EBRD, Rama: Government, partner to all who do business in Albania 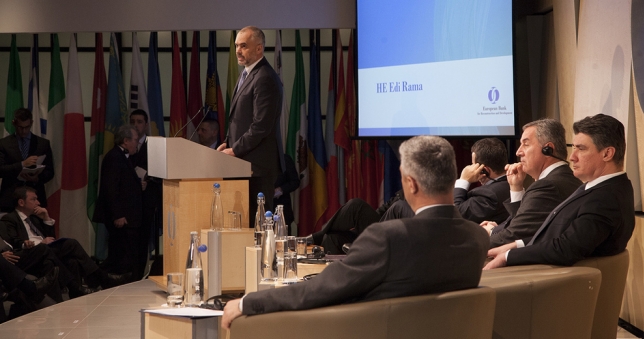 And this today is an ideal opportunity for the governments from our respective countries to talk with business leaders and international companies, development institutions of great importance such as the EBRD, World Bank. A great opportunity to hear, explain and understand each other for greater partnership in the future.

This opportunity is made greater by the closeness of our countries today, not only in geographical terms, but more so in economic terms.  The fact is that our region and all of Europe is still feeling today what began as a housing crisis in the United States, which turned into a financial crisis, and which in most of Europe turned into a sovereign debt crisis.  And thus we find ourselves today as a region, not only facing the same effects of the crisis, but also facing the same challenges looking ahead.

There was a very clear message from this crisis to most of our countries, a message that was certainly deeply felt in Albania, and which we have to deal with on a daily basis. The message for Albania was that the days of the old economic model are far-gone.

For years Albania grew through remittances and public debt, hiding the structural problems of our economy, the mixed system of transition economy, with economic freedoms, and yet not free; with competition, and yet without fair rules for all; with European laws, yet so very far from European practice. We now know that this system cannot last any longer.

They say that admitting that you need a cure, takes you half the way to health. In economic terms, as the government of Albania, we do not intend to wait to see whether this is right. We intend to go all the way!

This is why coming to the above realization, we have moved in many new directions, to try to address the problems, as many as they are, right from the start

EU accession is our main medium term objective, and we are intent on doing everything in our power to achieve it.

We have declared that we would seek a new economic model for Albania. In practical terms, this means replacing the inputs of the sectors that have failed recently (such as remittances and irrational public spending) with inputs from new sectors, which have enough room for growth and which can produce sustainable economic growth and employment.

These are challenges we all face in the region. And for this reason, right from the start, we have looked for ways of addressing them.

As they grow, economies do not specialize. They diversify. They add to their current areas of comparative advantage by adding new economic activities to their mix.

Inspired by this vision we are looking broadly at all our opportunities: in agriculture, in manufacturing, in mining, in petroleum, in tourism, in energy and beyond. Looking at the region, especially at our neighbors, who are similar to us, we have realized that there is a huge, unexplained gap between our economies. Just to take an example, though we dwell in the midst of one of the most relevant and attractive tourism destinations in Europe, our tourism industry lags far behind.  This is really just an example. Similar opportunities lie in every area that we look at: from manufacturing to hydropower, from agriculture to oil.

We are a country that has been blessed with many wonderful natural endowments, like our Mediterranean coastline, our hydric potential and the natural resources of our soil, like oil and minerals. We are committed to develop these gifts in an environmentally responsible manner. Not only for now, but for a European future for Albania.

Each economic activity lives in an ecosystem and we need to focus on improving and deepening the ecosystem so that they can be more productive. The obstacles to oil exploration and production are very different to those of tourism or agriculture and the government needs to have the bandwidth to fix many specific problems. But the ecosystems that support each activity do depend on fixing some cross-cutting issues that impact on everybody’s productivity.   Hence, our approach will be based on solving both cross-cutting as well as sector specific problems. Among the cross-cutting issues energy sector reform is a top priority for us, ensuring reliable energy supply for growth. It is a hurdle for public finances, and this is why we will look to solve the issue once and for all, with the invaluable help of our partners, like the World Bank.

The same will be carried out in public finances, to ensure that taxpayer’s money does to the projects that bring more economic improvements to the country. We will adopt a long-term model of public investment prioritization, so that the help of the government goes where needed.

Infrastructure development will also be a key sector for us, developing the existing system, to bring it up to EU standards.

There will also be reforms in education, pensions, social welfare, and of course transportation.

I mentioned all of these in little detail, but I would like you to see what this will mean in real terms: more opportunity. For in fact no economic model can function properly without FDI. I would like to extend an invitation to all of you to come and see for yourself that we mean business. The government of Albania will be a partner to all who do business in Albania.

This is why I did not mention our Business Climate reform in the above list of structural reforms, because it deserves special mention.

Again, we know the problem here too. Too often in the past, governments financed the public debt with private, unwilling financing by running arrears to contractors and suppliers in the business community. This is simply an involuntary and inefficient way to extract financing from the business community, taking away their working capital. Not only will this happen no more, but even before we are done paying the arrears left to us, we will have structured the legal obligations for this to never happen again, with the support of the IMF.

Business Climate reform is part of a new long-term project that we are starting with the EBRD, on which we have already signed today with the President.  We are creating a stronger interface between the business community and the government, so that the voice of investors can be heard in setting and implementing public policies. We have started by creating the National Economic Council right way after we took office, managed by the business community, and working closely with the Prime Minister’s office and the Ministry of Economic Development and financial institutions representations. Not only so that businesses may all denounce corruption, but also so that they can point out problems, work on solutions and be partners in the drafting of legislation that relates to their sectors.

A second extension to the National Economic Council, will be the Investment Council, which we have vowed to create with the EBRD, so that investors in Albania may take the place they deserve, as long term shareholders to the economic wellbeing of the country.

This is not an attempt at addressing a pressing concern of the present, but a major effort to change the economic future of Albania. And if we slow down or mess up somewhere, we will always be open to advice. Like in war, success does not come from having a good plan but of being able to make adjustments as the facts change and new information is revealed.

We are eager to work with all serious partners to fix the business ecosystem so that they can work more productively.  Our new initiative for attracting FDI is named “Albania’s call”. An effective government is one that understands that it needs a strategic alliance with those that can help transform its productive structure.

The economic profile of Albania for the next 20 years will start today. For this reason, one of our first moves has been to open up for the business community to tell us how they would like to be helped.

The manufacturing industry is working with the Minister of the Economy on a package of reforms that are based in making them more productive. We plan to expand and make permanent these mechanisms of dialogue.  We are not interested only in talking to businesses; we are very interested in hearing what they have to say. This is where the policy of renting out state property for 1 Euro a year can and will work as a policy. Because it was not the government that thought of it, it was the sector itself.

This partnership with the business community will not be exclusive either. We intend to collaborate closely with our regional partners.

Alone we are weak. And I believe we are weak not only as Albania, but as everyone in the region. But all together we could be very strong.

This is why as part of CEFTA we should all look beyond our borders for sources of growth. Not only for investments, but also for projects that bring the Western Balkans closer, regional projects, which will enable us to serve a much larger and more diversified market than even before. In fact some of the largest projects that our government has are regional projects, as any government in the region, which aim to maximize the values and economic interest that we share.  Alone we are only 3 million customers, together we reach 60 million, a market that cannot be neglected, I guess.

I would invite all the skeptic’s to come and see for themselves, and then return in a year or two. Albania has the potential to attract and help new businesses and investors. And though we may be somehow good now, we shall be much better tomorrow and the day after.

This is why it is imperative for you to remember that: “Albania is calling,” as so are the opportunities and potential of Albania in the long term.

During the discussions in panels, participants exchanged views and experiences concentrated on increase and strengthening of cooperation between them, as well as improvement in general of the investments climate in the region.

Taking the floor, the Prime Minister considered the forum an ideal opportunity for respective countries to talk with business leaders and international companies, development institutions of great importance such as the EBRD, World Bank, as well as a great opportunity to hear, explain and understand each other for greater partnership in the future. The Prime Minister made a detailed panorama of the potentials that Albania offers in important sectors of the economy, with an emphasis on agriculture, tourism, energy, etc. He briefed the participants on government’s initiative for holding a dialogue with business community not only to listen to it, but also making it an active part of the drafting of economic policies.

Prime Minister pointed to the maximal engagement of Albanian government in development of joint regional projects, as an opportunity to do the best for citizens of the region countries. “We intend to closely cooperate with our international partners. Together we are stronger”, the Prime Minister said.

The Prime Minister assured that foreign investors will find in Albania an attractive climate and a favourable environment for a successful development of their investments. He invited the participating businesses in the Forum, major companies and every interested investor to come to Albania and closely see this reality.

During his stay in London Prime Minister Edi Rama signed with EBRD President an agreement for a good governance and improvement of business climate.