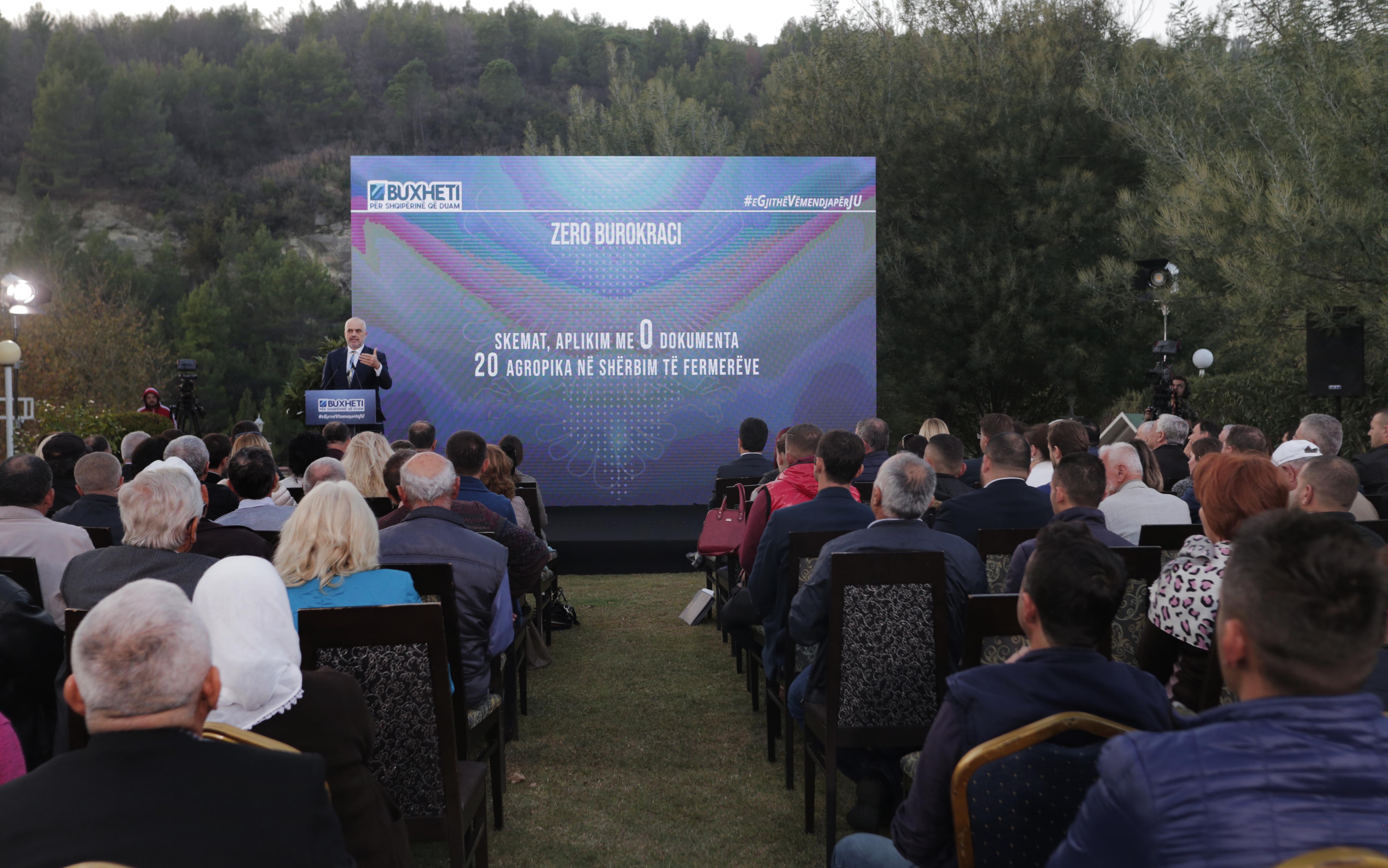 Prime Minister Edi Rama’s remarks during presentation of state budget on agriculture at a meeting in Ibe, Tirana:

For the first time this year, Albania’s food exports are valued at over $300 million, up from a total of $150 million in agricultural exports when we took office and took over the work to govern Albania. The country’s agricultural exports have doubled. This is a figure that speaks for itself to all hardened cynics, who, without having a single idea of what is taking place in the space of the Albanian countryside, talk in vain refusing to taking into account this simple truth.

Likewise, for the first time this year, agricultural imports have not increased, suggesting that locally grown food and agricultural products keep growing meeting the country’s needs.

The next year’s state budget on agriculture will be higher than eight years in office of the previous government combined. I am not talking about the overall budget, but the direct support for farmers as, thanks to the extraordinary work we have done and thanks to the trust we have put in the Agricultural and Rural Development Agency, we earned accreditation from the European Union and a new financial assistance to support Albanian agriculture will be launched together with Albanian government’s programme worth over EUR 20 million being launched for the second consecutive year, something that was unimaginable few years ago.

We have eased the application process by adopting a zero-document policy for every individual seeking to benefit under the support scheme and asking for the relevant documentation only after winning projects are announced. This make the application process for the support schemes involve zero related cost and practically puts an end starting this year to the months of terrible dallying and all kinds of torments people have gone through over the years.

We are witnessing a big change to the country’s fishing industry. This industry grew by 34% over the first nine months of this year. Our goal is to make sure that impact of fishing industry in the country’s exports to equal the value of the agricultural exports as a whole over the next three or four years. It is an epochal transformation of approach to the fisheries and aquaculture economy and a whole new space for employment growth with wages higher than those in other sectors.

We will keep on investing in irrigation and drainage systems, investing in flood prevention and protection projects. Indeed, for first time ever, an intensive work is being carried out by the Armed Forces for weeks now, in collaboration with Fier Municipality, to further prevent Vjosa River floods. Meanwhile, a program is being advanced in cooperation with the Republic of Turkey, which will hopefully yield significant final results in flood prevention capacities and efforts, because not everything can be prevented.

I am making a parenthesis; You already know that Italy was hit by a deadly weather offensive few days ago. A dozens of people lost their lives, but I believe no one has seen a political battle in the wake of such a natural disaster with the Italian government being accused of what happened. I mean, a country can be hit by natural disasters that go beyond the prevention and defence capacities. But what we should do is to work in order to build maximum defence capacities that, unfortunately, we still have to build as we inherited a zero-prevention and protection capacities situation, but these capacities are being strengthened year by year.

The concrete implementation of the national programme 100 Villages is set to commence this year. Discussions with the relevant Ministry are underway aimed at gaining another European funding scheme and include local government in the process of submitting applications from the Agricultural and Rural Development Agency.

More than once, like never before, we have been talking about the food safety over this period. All those who were used to fool consumers are alarmed like never before. A number of mouthpieces of the media trash have been paid like never before to lash out at the National Food Authority and report over alleged grave food safety incidents or alleged corruption practices. The truth is that their time is no longer the one that used to be. It has completely changed.

We have waged a frontal battle to ensure full food safety. Of course, a lot remains to be done in the area of food safety. On the course of this battle, more cases of food safety concerns have been discovered, just like more corruption practices within the Agency ranks have emerged. But all these are simply an indicator of the fact that a true war has been waged for over a year to ensure food safety and this war will go on.

I want to tell everyone that apart from what they watch on TV screens, such reports are not always untrue, they are not always defamations and lies, and they are not always efforts to manipulate the public opinion in interest of certain lobby groups and in exchange of cash payments to hit the National Food Authority and the Ministry of Agriculture. There are cases showing true problems over food safety concerns. But food safety in Albania today is higher than ever before. But compared to where and what we should achieve, undoubtedly a lot remains to be done.

Likewise, apart from what the minister highlighted as incentives and support in terms of fiscal burden, I want to emphasize that we are in a discussion process. We haven’t forgotten our promise to levy a zero VAT rate on agricultural inputs. We can now afford to drastically cut the VAT rate on agricultural inputs, taking notice of the fact that food safety is inextricably linked to the inputs quality, considering also the fact that inputs sale involves problems that are also related to the fiscal burden and therefore farmers opt to find other ways out.

We are finalizing a discussion to reconsider the existing VAT reimbursement scheme that has turned out to be a positive one, but by mainly favouring enterprises involved in agricultural goods collection activities, and to review the VAT scheme on inputs. We have agreed to cut the VAT rate to 6 percent only from a current 20% percent rate on the agricultural inputs. We also exploring ways to lower the reimbursement level for enterprises involved in collection practices as they have somehow showed considerable lack of respect for the scheme, refusing to share the scheme’s success with farmers.

This is still under discussion and I believe that during hearing sessions at the Parliamentary Committee and until the state budget law is finally adopted, we will be able to send a good news to farmers all over Albania on a significant reduction of the VAT rate on agricultural inputs, seeds, fertilizers, seedlings and so on.