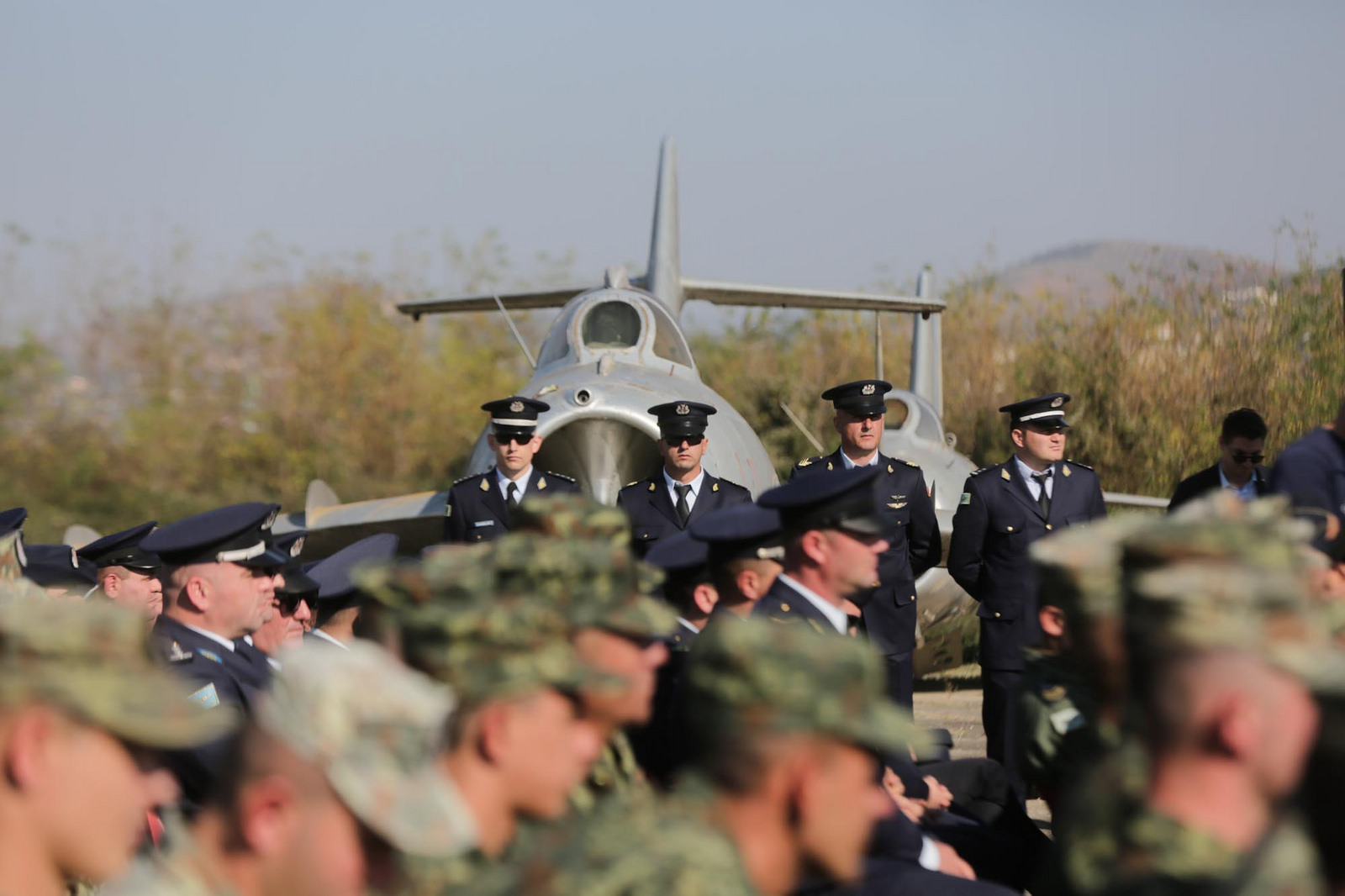 I am really happy to be here at Kuçova base to discuss the next year’s defense budget as part of a series of planned meetings to introduce the upcoming 2019 state budget. But I am also happy to be here and point out an extremely important fact for the future of our Armed Forces, transformation of this base into a NATO tactical support base.

This is a town traditionally identified with the aviation. Around 700 people, including aviators, aircraft mechanics and technicians, aviation officers and ordinary workers, were employed in this base. We know how the history goes then. Since the ’90s, this area of strategic importance to the country’s defense and our Armed Forces turned into an abandoned space until when, thanks to the commitment and seriousness, but above all, thanks to the respect our Armed Forces have gained among our NATO partners, we drew up NATO’s commitment to invest over 50 million euros in this base, which serve as a support base for the Alliance’s supplies, logistics, air policing, training and drills. The facility will also serve as a national base for Albania’s air forces, in efforts to set a new standard of our Armed Forces in this special sector.

The investment will open up new economic and social development opportunities for the entire area. Construction of this airbase, incorporating cutting-edge technology, will boost employment and it will translate into stronger economy and growing consumption in the area.

I think everybody is paying attention on our strong and serious commitment to meeting essential objectives set forth by the Alliance for each member state and the 2019 defense budget is a reflection of our country’s commitment and seriousness that were affirmed by the U.S. President himself at the latest NATO Summit. Albania’s defense budget in 2019 actually totals to 22 billion lek, or $ 220 million, up by more than 10% compared to this year.

In line with the commitment and, at the same time, with the objectives for enhancing and further strengthening our Armed Forces capacities, this budget will be made available to our army to achieve a number of important goals, from the modernization of the light infantry battalions, certified by the Alliance experts upon conclusion of the one-week “Albanian Lion Visa 18” military exercise, to improving other capabilities and basic equipment for Armed Forces members; purchase of light weapons, ammunition and accessories needed for these forces; making the integrated aerospace surveillance system operational, a project that is being developed in partnership with our strategic partner, the United States of America; improvement of the integrated maritime surveillance system. The two systems are crucially important to every aspect of our country’s defense and security, as well as a contribution to the NATO’s shared security architecture and the inter-institutional cooperation in the fight against illicit trafficking.

We have advanced cooperation with our strategic partner, the United States of America, to modernize capacities of Albanian Air Force and we will keep on working to materialize all these key points, because, in addition to the modernization of this air base here in Kuçova, we will continue with the modernization project of the Farka air base.

The funding allocated to the Ministry of Defense, in parallel with the fulfillment of the constitutional mission of the Armed Forces, will result in better and growing infrastructure in support of rural communities. Most recently, the Minister of Defense – and I avail myself if this occasion to appreciate her for the commitment and seriousness while in charge of the Ministry of Defense – has outlined an extremely important work being carried out by the Armed Forces as part of flood prevention and mitigation program, by operating on the ground in the area of Fier, where they are still engaged in intensive actions and working overtime.

This was just a brief general outline of a series and important objectives of the Ministry of Defense to combine successful accomplishment of the constitutional mission of the Armed Forces with the efforts to move ahead with work already underway to improve infrastructure in the flood-prone areas and support local communities.

Likewise, together with the Ministry of Health and Social Protection, the Ministry of Defense, in collaboration with a highly successful voluntary organization, are working to establish the new National Emergency and Solidarity Centre.

It is a pleasure to finally say in front of you and in front of all those who contribute to the Armed Forces that after many years, somehow overshadowed in terms of cash and income benefits, we will significantly raise the salaries of all workers and members of the Armed Forces.

The pay raise will be much higher than the figure you already saw on the screen, because after work on the state budget draft, together with the Minister of Defense and thanks to her insistence, we won the debate with the Ministry of Finance and allocate a much considerable budget to the Armed Forces, starting with a 19% pay hike for the soldiers and the pay will increase further according to the rank for the military personnel.

This is the highest pay raise in the history of the Armed Forces, a fully deserved increase precisely because the Armed Forces they have made Albania proud and respectable.

Our partners have expressed excellent opinions on our troops’ missions and the people who have served and have represented Albania in these missions. It was also a surprise to all and we have won great acclaim for our teams’ performance at the Exercise Cambrian Patrol in the United Kingdom, where we claimed Bronze Medal. Indeed, we won nothing, but our troops did and thanks to them we are now given the opportunity to brag about right in the eyes of the great powers that were represented by larger patrol numbers but trailed behind the Albanian patrol men.

I want to once again express my appreciation and deep respect for your sacrifices. I am convinced you deserve a lot more than we can do under the new 2019 state budget. But I am also convinced that in the significant pay raise you will feel a concrete expression of our attention, respect and gratitude for you.

Thank you very much for whatever you do. I also want to express particular respect and gratitude for your families who are the ones sacrificing even more than you do by living with your constant absence due to missions and often difficult tasks away from home. And we are very pleased to provide concrete expression of our attention and respect for them with the 2019 budget.