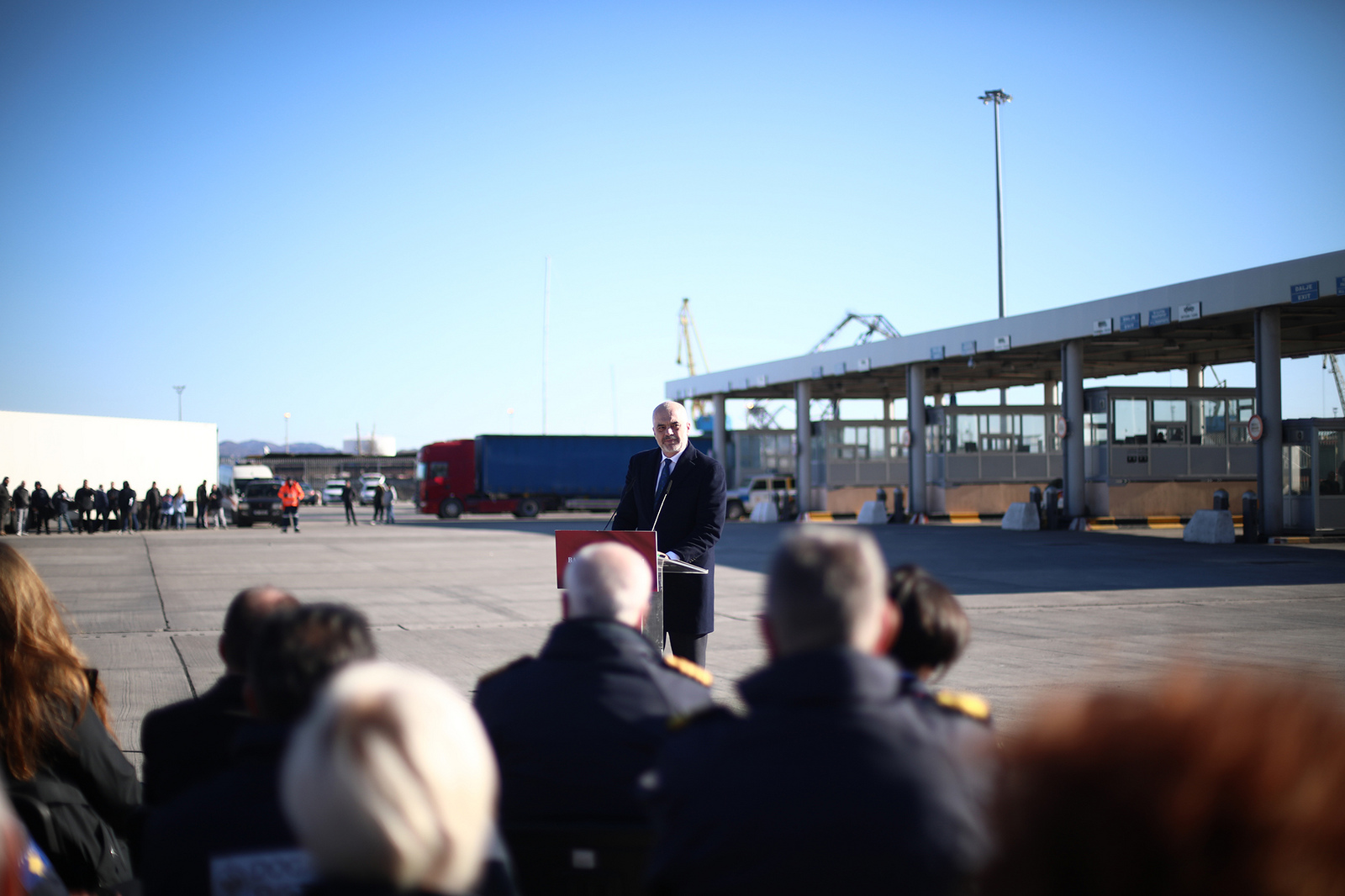 Honourable National Coordinator of both governments for the program of uniting our forces and energies towards accomplishment of common objectives.

I am so very pleased we today gather at another station of a journey we have projected together at the joint session of the two governments to open the Kosovo Customs office in Durres and to turn the Port of Durres not only into a customs of Albania, but also a customs of Kosovo.

Kosovo Customs office here in Durres represents the initial major step towards full customs unification between Albania and Kosovo. Cutting red tape, reducing the wait times, controls and tremendous cost incurred on business will be the direct effects to ensue following this Customs office opening. However, continuing this process by setting same standard at all customs points, not only Kosovo customs offices in Albania, but also Albania’s offices in Kosovo, is a short-term objective.

Now, the mutual recognition of two customs systems, the mutual recognition of customs agents and all this online, the possibility to carry out technology-based customs procedures and accomplishment of our objective of building a customs administration which, although having two sides, will work as a single body serving the Albanian entrepreneurship both in Albania and Kosovo, I believe it is a very important news for all entrepreneurship.

And not only that. This innovation in the area of ​​trade exchanges between Albania and Kosovo facilitates and speeds up the movement of goods as a whole and turns Albania-Kosovo border into a formal border.

The interaction between the two systems, set to start today, will allow for each customs clearance procedure to take no longer than a few minutes. So, we are embarking on a process that will inevitably leads us not only to customs unification, but also to the unification of markets. The full unification in a common commercial space, where everyone will benefit more.

Our Minister of Finance and Economy touched upon one aspect by providing figures and data on the volume of trade exchanges between Kosovo and Albania, at a time when we all know quite well that figures are under the daily pressure from the whirlpool of the “garbage bin”, lies, defamations and pure fantasies. Yet, we have no other reference but official data to response to those both in Prishtina and Tirana, who have often taunted this historic process of transformations that have commenced right after the joint meeting of the two governments.

The volume of trade exchanges between Kosovo and Albania has recorded a significant growth by around EUR 60 million.

Considering our ambition, EUR 60 million, or EUR 62 million to be more precise, is not an amount to be proud of. This amount is still too far from our ambition. Our joint opportunities and potential are much higher than that, yet they are higher than they used to be. And if we were to refer to our starting point, the first our joint governments meeting to usher in a new era of the trade between our two countries, they are much more.

On the other hand, as the National Coordinator briefly mentioned, I want to draw again attention that this office is not only an immediate result of both governments’ commitments that have been made public during the last joint session, but also the Schengen-model border integration. A day ago, Albania’s Ministry of Interior, in collaboration with Kosovo’s Ministry of Interior, has completed whole technical draft. The draft will now be forwarded to other ministries to go through a legal process and in order to make sure that a totally new border system, a Schengen border system, is established on today’s border dividing Tirana and Prishtina by spring. This means we are currently in an initial phase after having moved from a double customs control into a unified control system, after having opened joint border police office, with both Kosovo and Albania border police sharing joint office, but this will last for some times just as a procedure, as a completely new procedure will be launched in spring to build a completely fluid border, just like the border between France and Germany, or between Italy and Switzerland and so on and so forth.

What I want to add in this respect is that we are seeking to establish the very same system with the Republic of North Macedonia. Contacts are already underway. We want to establish this system with Montenegro too. So, whoever tells or will tell us that border integration according to border free Schengen model is practically the Greater Albania, I reiterate and we will reiterate it by telling them that the Greater Albania is an invention from the opponents and enemies of Albanians in history. There is no Greater Albania, there is an Albanian nation that has the right to see the future as part of the same organization and the same coexistence system.

Meanwhile, if we want to carry on this discussion, we are ready to do it. We have nothing to hide, as our dream is public, it’s not a secret dream and we really trust the truth that a dream people see with eyes open, sooner or later, comes true.

But this is not the case. This is merely and just our right to have a fluid border and make sure that those heading from Kosovo to Albania and vice versa no longer suffer on absurd and incomprehensible long queues.

Last but not least is what Fatmir mentioned regarding our commitment to unify all procedures on trade documents, another crucially important element. Which means that entrepreneurs and traders from both countries will no longer need to be issued two certificates upon going through a customs procedure, but one certificate. To illustrate, the agency tasked with ensuring food safety for Kosovo or Albanian food products will use one single stamp recognized by Kosovo and Albania too. This means that whoever coming from Kosovo will no longer need to wait and have his documents stamped by the Albanian agency too. The same goes for Albanian entrepreneurs heading to Kosovo. Abolition of the double stamp will incredibly facilitate movement and it will also help us regarding another element, which is a common problem and challenge, and that is the fight against corruption practices with stamps, procedures and long delays that are result of long ques and corruption practices alike.

Having said all these, not for formality, but for the sake of truth that should be highlighted, I would like to sincerely thank Fatmir Limaj, who has given e fresh impetus the interaction between our two governments and, frankly saying, this makes me feel very good since it is clear I was not wrong at all when proposing him to assume the role of the National Coordinator, which of course is worth confirming respect for myself.

Thank you very much to everyone and the friends coming from Kosovo!

I also like to appreciate Bedri, Kosovo’s Finance Minister, because one should point out that although we extended a welcome to our friends, but here we are all guests invited by the Minister of Finance of Kosovo as we are attending the event marking the opening of Kosovo Customs Office Kosovo and the port of Durrës is no longer only Albania’s port, but it is also Kosovo’s port, not in the sense that Albania is also Kosovo and Kosovo is also Albania, but in the administrative sense. Now the only thing we have to keep in mind, dear Fatmir, is the fact that there will be serving two Customs Administration directors and that should not create more business problems.