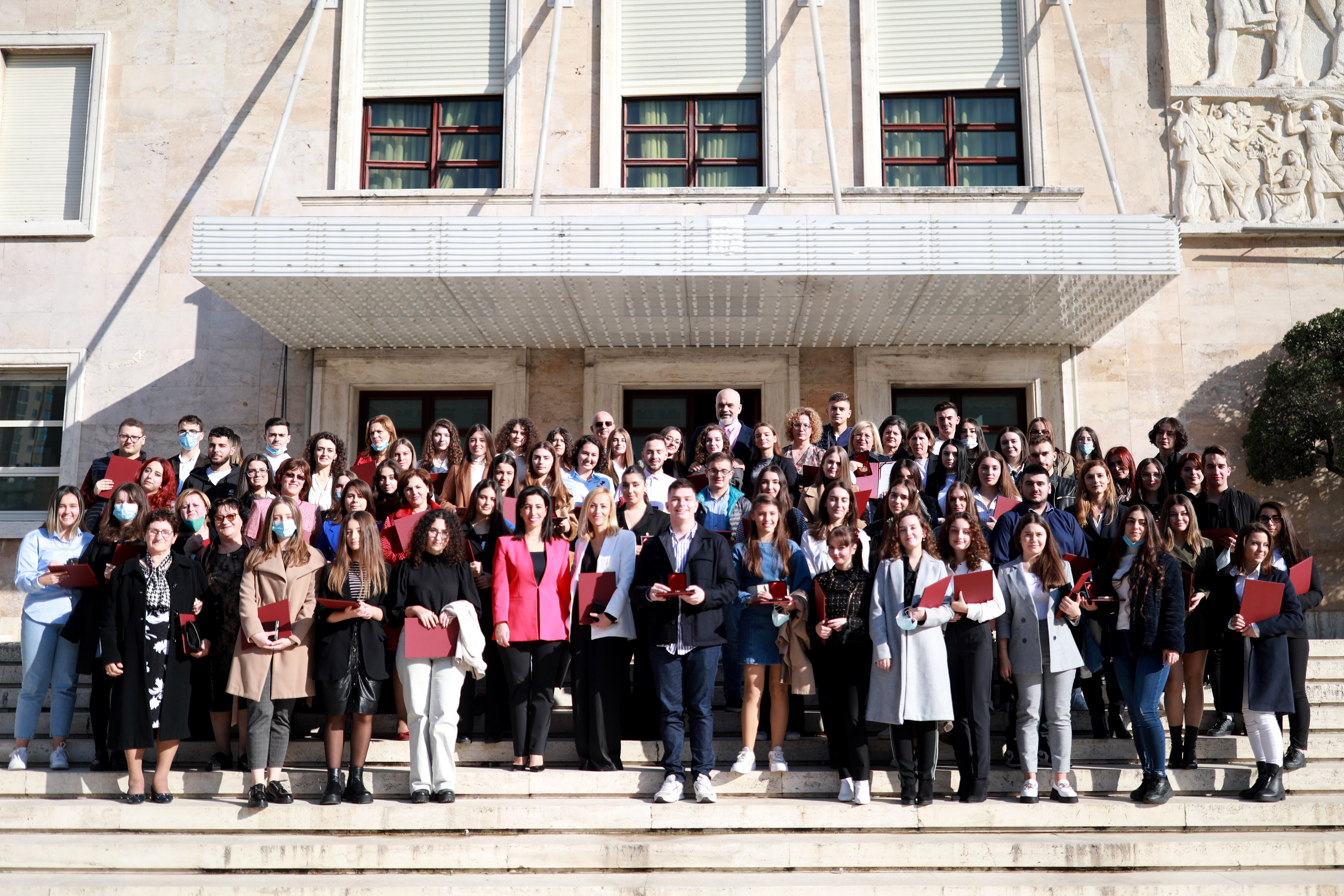 In his remarks at the ceremony, PM Rama said:

Welcome everyone! This is the most beautiful ceremony we have ever had the chance to host in this very hall specifically dedicated to the high school graduates who successfully complete the standard high school curriculum with a grade point average of absolute 10.

By extending a warm welcome to everyone, I would also like to express the assurances of my highest consideration and respect, as well as the gratitude for the power of your example.

Such a ceremony has already become a tradition and awarding the gold medals to best performing students for their academic excellence represents for us not simply a moment to present you with a much deserved medal, but also a moment to share with the public precisely for the power of the example of each and every one of you radiate.

It could happen that those who recall the last year’s ceremony could well say I am sounding like a mere repetitive, but I would repeat again what in my view is exactly the very essence of this amazing accomplishment, the fact that there are girls and boys among you here that come from modest families, if not from poor ones, there are students who could have had all the potential excuses not to accomplish what you have already accomplished, economic and social woes, despite the fact that many of you could have had to travel and walk long distances to go to school and return back home, and also the fact that you haven’t used none these excuses to neglect none of the subjects and excellently perform at school speaks volume about the huge difference between the man who believes in his dream and feeds his ambition through hard work and many others who resort to any excuses for their failure, which, as I said, can all be legitimate.

In my capacity as Prime Minister, I have visited many families facing economic troubles and what has let indelible lifelong impressions on me is the fact in those families, whose house roof leaked often leaked anytime it rained, I have had the privilege to meet children who excelled at school, children who used to study amid most inappropriate physical conditions, yet they performed excellently. They were pupils who didn’t limit themselves to learning Albanian, but they spoke English fluently, while their family struggled to make the ends meet and none of the adults spoke English.

In the meantime, this ceremony is an echo of a generation that spends the after school time involving in situations not resembling each other, but that come together here as part of this considerable group of girls and boys, who come from different walks of life in terms of their families social status, but what unites them here is the fact that they are all equally excellent.

I don’t want to take more of your time as the medals will be awarded to each and every one of you and it will be a privilege and a pleasure for us to hear each of you to shortly address this ceremony.

However, I would like to complete this short speech by extending my best greetings to your parents, be them either wealthy or poor ones, as they deserve immense respect and I very much hope you will never lose respect and gratitude for them as you embark and further move forward along the path of life, where you would certainly go too far, because without your parents and without their support it would have been much more difficult, if not impossible for you to you to achieve the success you have achieved.

On the other hand, I would like to just say that your accomplishment would help you not to fear dreaming as big as possible, given that your effort has paid off in the form of Gold Medals and this is the hardest of evidence showing that nothing is impossible when he is ready to fully commit himself to something. If a man can dream with his eyes wide open, the fact that he dreams about something, he can also succeed in making his dream come true.

But though everyone can dream with their eyes open, not everyone is able to pursue their dreams, because the bigger the dream, the bigger would be the efforts, the sacrifices, the bigger would be the courage, as well as patience, but also the extraordinary power not to give up, because there is no straight path leading to your dreams, but it is a path full of unknowns, full of ups and downs, along which you could also fall and where you would rise again and move constantly ahead.

It wouldn’t be superfluous if I were to cite the example of soprano Ermonela Jaho, and football player Leo Messi, whom you all certainly know. They are both the prototype of the same example of the courage to dream immensely, though others could laugh at or that could make relatives worry about the mental health of dreamers.

Leo Messi was a child experiencing serious health problems as a child and was diagnosed with a growth hormone disorder. His parents were seriously concerned over his health, but he always dreamed about playing at Camp Nou one day. Of course it sounded as the wildest of dreams of a child, but it was the dream of a child who pursued it and everybody knows how the story goes.

Ermonela Jaho came from a poor family and she attended the Artistic Lyceum, but her teachers didn’t single her out among other girls at the Artistic Lyceum as the artist, who would excel on the world’s music stage, but simply saw her as a girl with strong will, who talked about her dream that sounded laughable and preposterous to everyone. Ermonela Jaho told her school friends she would perform at La Scala one day.

Going beyond even the most optimistic predictions about her talent, she succeeded not just to perform on the stage of La Scala, but also on the world’s most prestigious stages. She has become an internationally acclaimed artist and has ascended to the top, where she now excels and shines as a great special star on the sky of the world’s opera music.

These are big dreams that require extraordinary sacrifices and if you search  a little more into their lives, you will find out that their success has come through strong commitment, sacrifice, and training that would have exhausted 99.99% of others who only if they thought they could do it, I mean both, with extraordinary psychological resistance not to give in to scepticism, reservations, to the ridicule of others when they had to move from one station to another, and with the conviction that it was their right to make their dreams come true.

You have already demonstrated what you are capable of doing and accomplishing. Don’t fear your dreams. The bigger your dreams, the more sacrifices they need and if you are ready to make those sacrifices , be confident that you will succeed and from the top where you will reach you will then be able to calmly look at all those who meanwhile had said that this cannot be done.

Hegel used to say “there is nothing undoable, but people who fail doing it.”