We will undo informal Albania at any cost 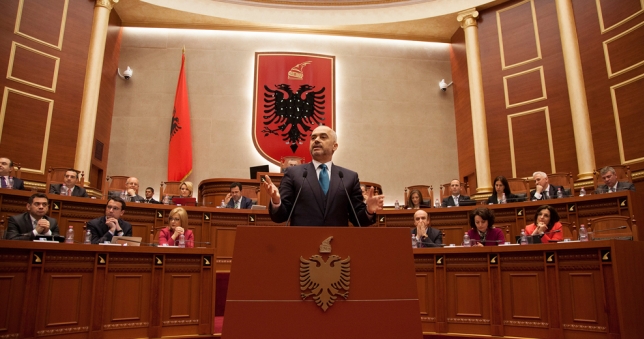 In the context of discussing the law for public consultation it is worth to take a few minutes to reinforce the message of the ministers who spoke before about one of the deepest, the most important and the most useful reforms in this country, the reform in the energy sector.

A new budget draft will be submitted to Parliament on Monday, at 8:00 a.m., at the very second provided by the Constitution. For the first time the Assembly will have all the time required to extend the discussion on the draft for the new budget with all stakeholders and obviously even the MPs to discuss with all voters across the territory. What I would like to mention today, for the sake of this discussion, from the new project is the increase of pensions for family heads retired, the increase of economic assistance for all families that receive economic assistance and the increase of subsidy for disability, in order to cope without even the slightest pain with the removal of the famous and very abusive category of 300 Kw. In the past four changes have been made to address the issue of income from consumers, all fourth have been made with uniform price increase. For all four of these changes has been said and written on paper that there will be compensation through reimbursement of the categories in need. And in all four times the ones who have suffered most were the weak categories. Those who were unable to escape the pain of injustice were exactly the weakest one. Those who have experienced failure of reimbursement or compensation scheme at their own expense have been precisely the weakest.

We will do neither compensation nor reimbursement. We will increase pensions and economic support; we will increase the salary for disability. Every head of family pensioner will have a pension increase. Every family with financial assistance will have an increased economic aid. Every person with disabilities will have an increased disability salary. No one will feel anything associated with the removal of the so-called protective bandage, that actually has become the shield of electricity thieves, who manipulate timers, who put one respective timer to go under 300 Kw and who steal day and night this state battered by the four sides in all these years, by cooperating in the crime of theft of 150 million Euros a year and denying the real opportunities to do many things that have not been possible only because they don’t want to pay what they consume.

We found an informal Albania. The crown of thorns of this informality that cripples the body of this country and doesn’t allow it to recover is exactly robbery in concert of electricity. Creating every year a hole that becomes deeper year after year, thus disgracing our country and making it the only country in Europe that doesn’t resemble to anything around and which, in order to look for and find similarities must look at other continents and at depressed areas of other continents, where there is no state, there is no law, there is no order and there is no justice. We will leave this shame to those who deserve it, but we shall remove it from Albania and we will make Albania recover itself.

Not only will we close this hole, but we will transform this extraordinary national asset, that is the asset of energy resources, from a rope around the neck that threatens to suffocate the whole country, in a source of profit.

This is our ambition!

We haven’t been limited only to this aspect. How much have investments increased in the distribution network of electricity have increased, despite the increase in prices? It is enough to say that we have been listening for 20 years people say that the south of our country is one of the major sources of economic growth and one of the pearls of the Mediterranean, and no investments have been made since the 70s in the south of our country to ensure normal energy supply. All those who spend their holidays in the south and all those who live in the south know very well what kind of energy they receive and how the lamp trembles because it cannot be lit and it cannot stay off.

Today we have inherited a system that is totally lacking approximately 150 thousand timers, not counting the manipulated timers by those within the company in “monkey see monkey do” style. Seeing that the company surrendered to corruption, in cooperation between higher levels of CEZ and the highest levels of government, they have done their part. For every one who steals energy, steals it also thanks to the electrician or the timer reader who in exchange for tips, eat and suck the marrow of our economy and state.

Certainly the most ugly, the most unfair thing that should be wiped away once and for all from this country is the flat flee. But it is a temporary measure that has been continuously used by everybody for the simple reason that they have never thought of how to build the system. They have always thought of how to postpone the apocalypse day. For they have acted as Lala Gjoni, instead of acting as leaders and administrators of a normal nation. As long as Lala Gjoni is there, eat, drink and sing and then, when the party is over, everyone can go and hang themselves because Lala Gjoni is done with his part and now is telling tall tales. This is not and can never be our choice.

It is a shame that there are people among us who imagine the notion of social penalty. There are no social penalties. Those who violate traffic lights rules have to pay. And they must pay the fee through their noise so that they will not violate rules any more. The history of social fines and is the history of corruption and vegetation in a morass from where we cannot come out if we do not define loudly and clearly that our duty is to serve with dedication all those who respect the law, to ensure all those who respect the law that they will not encounter in the way the bully who are above the law. On the other hand, we are here to tell the bullies who stood above the law, even when they had the traffic lights opposite, that that era is over.