National flag presented to Albanian team ahead of Tokyo Olympics 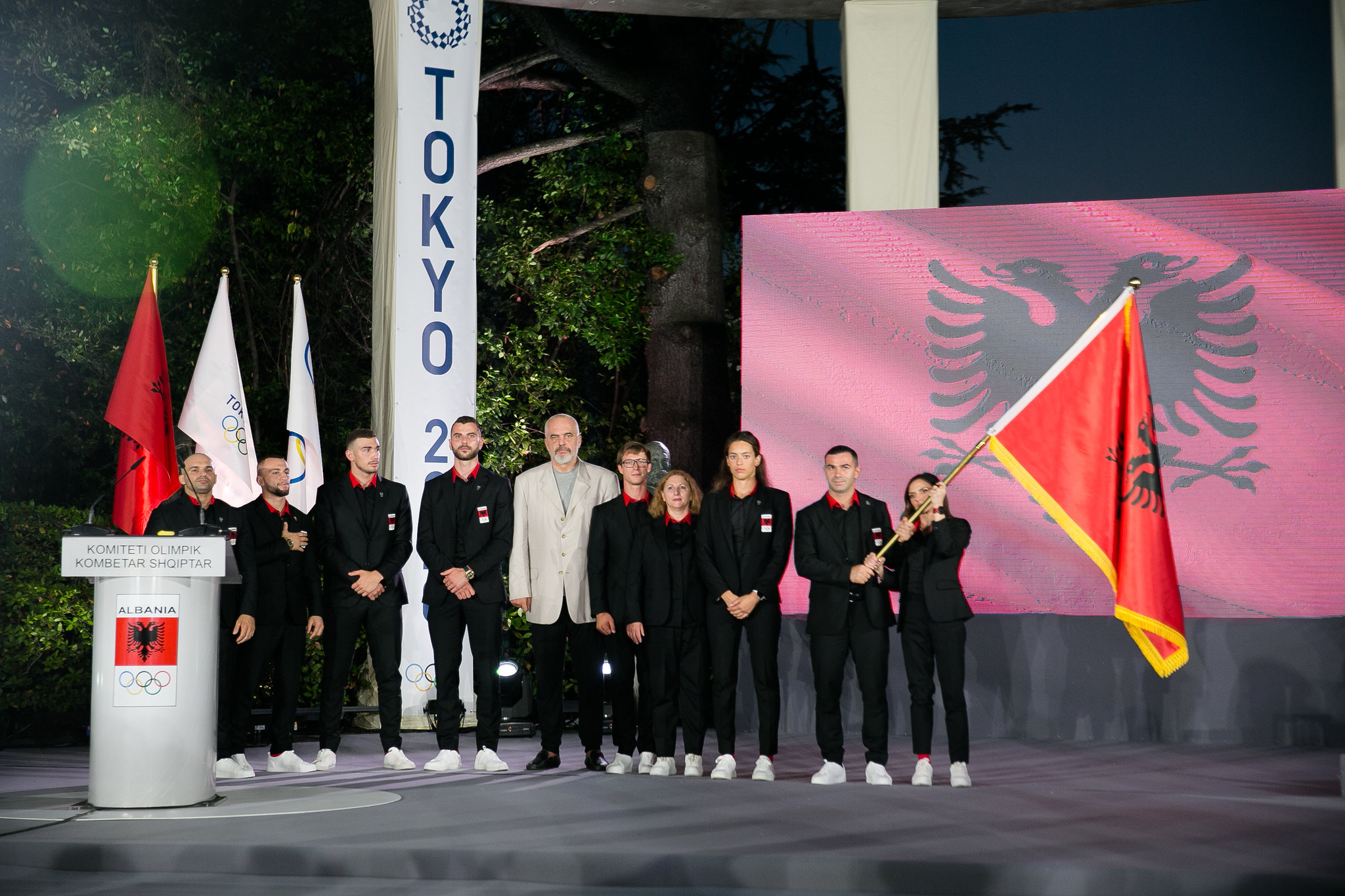 Prime Minister Edi Rama’s remarks at the ceremony ahead of Albanian national squad departure for Tokyo:

Good evening everyone and greetings to all members of the national mission to the Olympic Games!

The Olympics as always definitely an important milestone in sports and it is of course a very special moment for the participants in the Olympics, because, as the founder of the Olympics has said, the most important thing in the Olympic Games is not winning but taking part.

I am very glad that on this tough eve of the Tokyo Olympics due to the emergency situation caused by the pandemics, we have made significantly better preparations than ever before and this can be primarily attributed to the Head of the Albanian National Olympic Committee, who sustains a lifetime passion for sports and an ambition that has characterized him at a very young age, when he was a national champion over many years.

I am very pleased to have had the opportunity to closely work with the National Olympic Committee and assist as much as we can these sportsmen and sportswomen and, also thanks to the direct involvement and commitment of Tirana Municipality and Tirana Mayor a decent treatment has been made available to all members of this mission, although there is always room for improvement and we still got a lot to improve.

We are really committed and motivated to give a fresh impetus to the sports movement in schools, still in an embryonal stage, so to say, after decades of neglect and strange interruption leading to serious consequences. In the meantime, we think the conditions are now met for this movement to usher in a new phase and an organized movement begins throughout entire schools, gymnasiums and universities network, which, despite the government and the Ministry of Education and Sports efforts, largely depends on National Olympic Committee.

After the Tokyo Olympics, we will work with the Committee to draft a joint new program on sports during our third term in office, and sports in primary schools, secondary schools and universities, which is a top priority. We will cooperate with the Committee’s experienced members, and not only, but also with the heads of various sports federations and together embark on a joint journey to take the Albanian Olympic movement to a more sustainable level and complete the current embryonal stage in the next four years.

The support we have provided this time to the Olympic mission members, the sportsmen and sportswomen present at this meeting, won’t be stopped once the Olympics is over. To this end, in collaboration with the National Olympic Committee we will draft a stable plan to make sure that not only these sportsmen feel the continued support, but also younger sportsmen and sportswomen fighting to join such Albania’s missions, so that we support them before they are forced to go through tremendous sacrifices thanks to the family and passionate coaches’ support only, but providing them with all the necessary assistance we can. A support which certainly is never enough and will never be sufficient, yet I am confident it can and it will be as such as to make the sportsmen feel being respected, the feeling of being supported and celebrated, not only when they grab medals or win titles, and not only on that day or over those days, but all the time.

To conclude, I would like to express appreciation, not for protocol reasons, but for the fact that the honourable Japanese Ambassador hasn’t been a formal follower, so to say, of this effort, but an active partner in supporting this Olympic mission. I would like to sincerely express my gratitude, very much hoping that our cooperation with Japan and the communication and partnership bridge we have built and launched further strengthens and develops also thanks to this mission. This mission, Albania’s participation and hopefully successful results let all be one more reason to develop closer relations with Japan and very active and advanced communities in various domains in Japan.

Again, I wish every success to the Albanian squad! I very much hope and wish you accomplish on all the objectives you have set and be convinced that, whatever the outcome, if you will do everything you can, you have done the task and accomplished the mission.

Thank you so much!