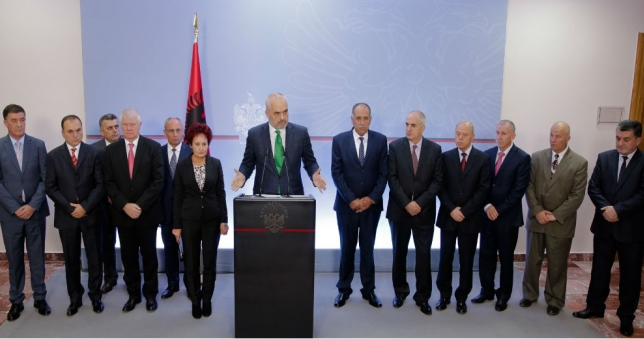 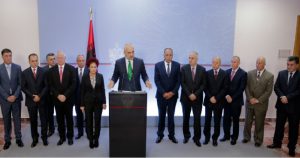 Prime Minister Edi Rama introduces the new team of prefects for the 12 counties of the country:

Today, I would like to announce the dismissal from duty of all the prefects of Albania and the appointment of the new prefects the government decided at the meeting that just finished.

We are at a new stage in the governing process, following a series of reforms among which the fundamental administrative-territorial reform that marked the opening of a new chapter for the second-governing level, as well as for the statehood in Albania. At the same time, we are at the beginning of a new governing phase with some fundamental challenges, among which a completely reshaped institution of the prefect is required, as a representative institution of the Prime Minister and of the government in each county.

If we look back, this is an institution which remained in the background in a lethargic position, and meanwhile, the new dynamics of this new governing phase, as well as the high expectations that people have from this ruling phase, require a new approach and profile of the Prefect’s figure.

We have built a process for about 40 days and we have actively but also scrupulously evaluated, after agreeing on the new profile of the Prefect, a number of candidates among senior military personnel who are no longer an active part of the Armed Forces, but who are carriers of a precious experience that this country has no luxury not to use in view of its future.

As I said, we have been primarily interested in the profile, since we have analysed the whole progress of this institution over the years, and then have filtered the potential candidates by assessing the 12 new prefects in terms of the public service responsibility without conditions, in terms of their high vocational training and their leadership. Also, assessment was made also in terms of their management and execution skills in a career where they have been involved in important challenges and tasks within or outside the country, in terms of their long experience in the direction, as well as in terms of a precious experience they bring in a field that year after year is becoming increasingly sensitive and of priority, such as the Civil Emergencies. Undoubtedly, it was made also in terms of their skills in view of a fundamental necessity of this mandate, which is the observation of the whole activity of the state administration in relation to the public, in view of an ever better service provision and of the war against corruption. We will take further steps in this process in the next few days, but with this step taken, the role of prefects is of particular importance; – we are firmly committed to the second phase of the open battle against cannabis cultivation, to go after and put behind bars the criminal networks and elements, and to seize their assets obtained due to the criminal activity.

The new prefects are also required to make a radical transformation of the prefecture institutions they will be entering starting tomorrow, in order to have a total, rigorous and effective control over their entire area of responsibility, but also to build an observation tower for all state activity in the territory.

The Prefect as an institution is an officer who has a great responsibility, but these prefects will be responsible before the government for the regional control situation at a county level in the sense that they will be informed in real-time about all the issues which other institutions should deal with and solve.

Setting the optimum parameters of public order and public security in order to take further a story of positive indicators, will also require the direct engagement of prefects as real-time interlocutors of the Prime Minister’s Office and, of course, of the Minister of Interior as well.

On the other hand, coordination, monitoring, evaluation of the performance and readiness of the central government structures in the local institutions, as well as the local government itself, will be in their focus in view of their readiness to cope with any civil emergency.

With a lot of gratitude for the readiness with which all the new prefects welcomed the proposal to take on this difficult task, as ambition is great, the goals are ambitious and the reform required in this regard is not easy, as well as with the higher assessment for all of your, from the first to the last one in alphabetical order or on the list that I will present, I am very happy to inform the public that starting tomorrow, the Prefect of Kukes will be the reserve colonel, Mr Zenel Kuçana, who has faced difficult tasks and has been one of those who have faced the important challenge of the 1999 crisis during the Kosovo war and the inflows of brothers and sisters displaced with violence from Kosovo to Albania back then.

Mr Nexhbedin Shehu, the Prefect of Debar will be another reserve Colonel who has completed long-term qualifications in Austria and Germany and has exercised senior duties as Commander of the Defence Academy and Director of Human Resources in the Ministry of Defence.

Prefect of Shkodra will be Mr Cesk Millja, another reserve Colonel who has run a number of Armed Forces Modernization projects, completed qualifications in Germany and has been lecturer at the Military Academy and Director of the Intercommunication Office with the Headquarters.

Prefect of Lezha will be the reserve Major, Mr Gjergj Prendi, who has had a prominent role in the military reserve structures and has performed a number of important tasks within the Armed Forces.

Prefect of Elbasan will be Mr Maksim Malaj, a reserve Major General, Commander of the Rapid Reaction Brigade, Chief of General Staff of the Armed Forces of the Republic of Albania with qualifications in Holland, Croatia and Germany.

Prefect of Berat will be Mr Harilla Dafa, a first Naval Base reserve Captain, Commander of the Naval District, director of shipbuilding site in Vlora, who has led several important projects of modern shipbuilding of the Naval Forces.

Prefect of Vlora will be Mr Flamur Mamaj, who has a military and civil education at the university level and has long served in the Armed Forces.

Prefect of Korça will be Mr Dhori Spirollari, a reserve Brigadier General, Director of the Personnel Directorate at the Headquarters, Air Force Commander of the Republic of Albania, with qualifications in Germany, holder of a PhD.

Prefect of Gjirokastra will be Mr Astrit Aliaj, a first-rank reserve captain of the Naval Forces, a Commander of the Academy of Naval Forces and a military attaché of the Republic of Albania in Italy, with long-term qualifications in Italy.

Prefect of Tirana will be Ms Suzana Jahollari, the first female Colonel in the history of the Armed Forces, a reserve Colonel, Commander of the “Thomson” Academy of NCOs, Director of the Inspection Department of the Ministry of Defence, with qualifications in the Netherlands and USA, active in NATO forums related to gender equality and other issues.

These are the 12 new prefects of the Republic of Albania. I am convinced that with their integrity, experience, willingness to serve the Albanian people unconditionally, they will take the Prefect institution to another level, and will be an added value in our government endeavour to statehood making, to fight firmly crime and corruption in every part of the territory, to deal with Civil Emergencies with much more dignity and efficiency and to coordinate the work between the two main ministries related to their work, the Ministry of Interior on a variety of aspects, and the Ministry of Defence as the Ministry that takes on the responsibility for Civil Emergencies in the Republic of Albania in the framework of the structuring reform.

You talked about a new profile of the Prefect. Will these prefects also have new legal competences? The second question: Has Mr Visho Ajazi Lika given any explanation as to why he resigned, and is it true that he has agreed with you on this? Could you please explain this?

Prime Minister Edi Rama: To answer the first question I can say with greater conviction that the existing legislation provides all the required space for the Prefect’s task to be performed at best, in view of all the objectives we have and in view of the great purpose that we have to make Albania a state.

Mr Prime Minister, why did you dismiss the other 12 prefects en block? Which is the reason that led you to dismiss all 12 at once?

Prime Minister Edi Rama: The reason is each of the prefects who are here, en block.