Medals to AFs in coping with floods, PM Rama pledges pay rise by 2019 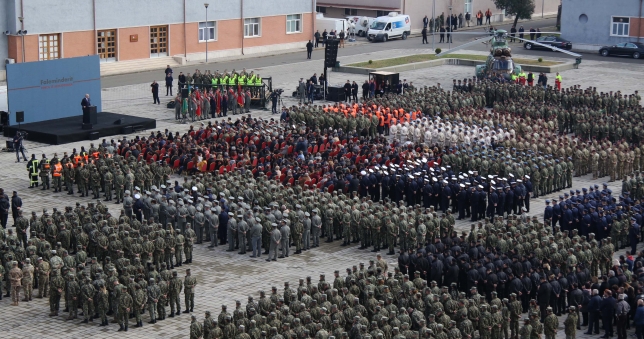 Prime Minister Edi Rama attended the “Gratitude to the Armed Forces” activity organised by “Skanderbeg” garrison at the Ministry of Defence on Friday while pledged a considerable pay rise to military forces by 2019.

In this context, the Premier said that “compared to other colleagues the salary is lower and despite the high professional level and patriotic knowledge we have not rewarded as you deserve it.”

In addition, PM Rama said that “now the government will first allocate a reward as an expression of gratitude to all AFs involved in coping with floods.”

“I commit to this day that 2018 will be the last year of your existing salary while we are quiet determined to increase military budget in the frame of being a NATO member, reflected on 2018 budget thus 2019 priority will be increasing military salaries,” PM Rama said in his address to the ceremony.

The gratitude ceremony was attended by Prime Minister Edi Rama, U.S. Ambassador to Albania, Donald Lu and the Minister of Defence, Olta Xhacka.
Minister Xhacka said that “AF will be in service of the country even in hard time and a better future set up awaits us.”

The Medal of Combatant was conferred to Commando battalion nr 1020 and the second infantry battalion on taking part to military missions.