Germany committed to European future of Albania and the region 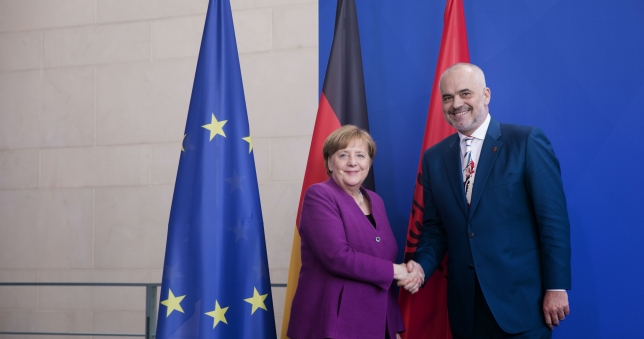 Chancellor Angela Merkel: Ladies and gentlemen, I am glad that – and I take delight in saying this – the Albanian Prime Minister is back again in Germany at a crucial time. It took us a long time to form the government, but we can now get down to business. I can say that we have very close bilateral relations and I would like to express my appreciation for this.

The Prime Minister was in the Parliament earlier. Now we will discuss together. In 2018, we marked the 30th anniversary of German-Albanian economic cooperation. Germany remains very committed to this day, but we will primarily talk about the future of the region, as well as the Western Balkans Summit due on May 17th.

I think we both should very much appreciate the Bulgarian Presidency, which is incredibly taking care much about the core issues of the region, which has led to a steady increase in the visits of European politicians to the region.

We will be consulting on how we will further operate further in the process of Albania’s European future. You know we are convinced that all Western Balkan countries should have a European perspective, so that one day they can become members of the European Union.

On April 17, the European Commission has proposed to open EU accession negotiations with Albania. We need to consult with the European Council about this in late June. There are a number of prerequisites for the accession talks to open. Albania has strongly met some of them. There are certain preconditions for opening accession negotiations. Over the coming weeks, we will make our final opinion, whether there are still some things that need to be done or whether sufficient progress has been made. We will talk about this with our European counterparts too.

The today’s meeting is very important to me, because I will learn from the Prime Minister how he sees the fulfilment of various preconditions and how to support Albania in delivering the reforms, just like we are doing today. We have done this and we will keep on doing this in the future.

I want to plainly say that Albania has made significant reforms and has also made progress through reforms.

We have discussed these reforms in our last meeting, for example, I am talking about the justice system reform, because the system’s integrity and credibility can strengthen through this reform. We understand that the vetting process is now being extended to the police. I can just encourage the Prime Minister to continue down this path.

We have also talked about other important areas, including the rule of law in general, but also the fight against organized crime and corruption. I think all of these are of a great importance to Albania and its people. The potential for economic growth also derives from this. The potential for credibility and correctness for investors also derive from this.  From this we will have better chances for the future of young people, who must be primarily taken into account.

We will be talking about Albania, but certainly about the region too, the situation in Bosnia and Herzegovina and of course about the Sofia Summit expectations and our London meeting under the Berlin Process in July.

I believe we have already achieved some things in the region, I am talking about the youth network, or, it comes to my mind now, the most recently held Digital Summit the Prime Minister had proposed. I think and I believe we will have a friendly conversation. Germany will support, Germany will be helpful in order to really see the progress we need in order to make a decision in June.

Once again, I would like to wholeheartedly welcome you!

The visit to this building and the meeting with the Chancellor is always a significant moment to Albania, but it is also a great thrill for me to be here. I would like to appreciate the Chancellor, who won the election and leads the government again, also for her whole encouraging and continued support for the Western Balkans in general, and certainly Albania, in the process of democratic development and European integration.

Thanks to her vision and leadership, the Berlin Process has transformed the region into a space where dialogue and cooperation have recorded progress which was unimaginable just five years ago.

At our first meeting here – it was April, 2014 – we talked about also the necessity of launching a profound reform in the justice system and a year later, in Tirana, I asked the Chancellor to support the idea of vetting, the re-evaluation of judges and prosecutors, calling for her and Germany’s support.

I am proud that thanks to Germany’s support to, I here today after Albania has carried out a deep justice system reform, which is seen by the European Commission, either in its Enlargement Package or in its most recent Progress Report, as a model that needs to be extended to other Western Balkan countries, including the countries which are currently negotiating and, in the meantime, we have started implementing the vetting law with initial encouraging results.

We have received the European Commission’s positive and unconditional recommendation to open the negotiations in recognition of these reform efforts at this first stage of the process and I very much hope that we will also receive Germany’s and the Chancellor’s support in June.

We know quite well this is not the end. This is just the moment of ending a stage and opening a new one. There are still many reforms, changes and sacrifices to be made in order to fully deserve EU membership one day. But, at the same time, I am not here today to express the Chancellor my conviction that Albania should waste no time and energy while waiting for the accession talks to open, because we have deserved this and because that by joining the group of countries in the region that have already launched the negotiations, we enter a new phase of the process, a phase where we have extremely a lot to do, a phase where there is a sense of new beginnings with fresh energy and broad support of all Albanians in a process where Albanians see their future.

I have already said and I repeat, Albania is home to both Muslim and Christian communities. The say Albania is a majority-Muslim country, but indeed Albania is a country where both Muslims and the Christians, adults and young people, north and south, all share a common religion that is Europe.