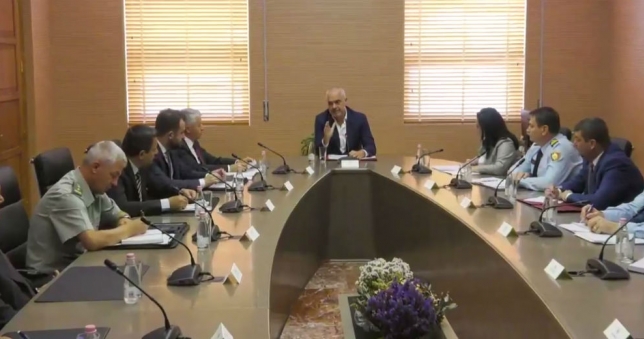 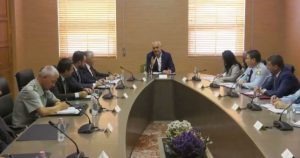 Speech of Prime Minister Edi Rama at the SOO meeting on reporting the results of the National Plan for the Prevention of Cannabis Cultivation and Trafficking:

I believe it is not too much if I start by saying that the first National Plan’s objective to reduce to the historical minimum the cannabis quantity cultivated in the country can be considered fulfilled in the most exemplary way.

Without a doubt, all involved structures, State Police leaders, deserve a special thanks.

That being said, it is necessary to underline immediately that this is an ongoing war which has entered a decisive chapter at this time of the year.

It is true and I have been pleased to note from the direct communication with international partners that this year marks the year with the lowest cannabis quantity cultivated in Albania since 1991.

Also, it is just as true that this spectacular result has created, on the one hand, a very strong impression on our partners, but on the other it has also spurred the EU’s involvement in this process with a support fund for extending to a month the monitoring flights so that we can have a complete control of the situation up to the latest possible time limit as far as the spectrum of opportunities for cannabis cultivation is concerned.

This is a very important success, but on the other hand, let me say also that this is a very meaningful example of how much state police can do, how much can be done through cooperation and interaction between all law-enforcement agencies and structures in relation to specific issues which seem deeply unsolvable for a certain time.

The results achieved are definitely a very encouraging mirror, but this new approach, which is the result of our National Plan, requires a horizontal and vertical expansion, much more aggressive now to fight against cultivation and trafficking networks, and to reach not just a few significant figures of the number of arrested criminal groups, but of the criminal assets.

Another achievement is also the fact that people are not shown any more scenes of police fighting cannabis with sickle at hand, as the new systemic approach with a clear focus across the territory, of the locations where cannabis was previously cultivated, with a clear definition of responsibilities for each police officer, each commissariat for each leading structure, is naturally a consequence of this substantial change of this operation.

The fact that policemen no longer deal with plant cuttings, but rather act with determination and professionalism across the territory, is a significant achievement and is the fruit of cooperation and interaction among all agencies and institutions.

This great success achieved in the implementation of the new national plan should be seen as a step rather than the whole path we have to walk to the full achievement of a fundamental objective, not only to remove Albania from the map of the countries that cultivate and which are places of origin of cannabis and of a history that stains the country and society, but a first step to understanding how much can be done in this regard, and to understanding that it is the duty of the state, it is the task of State Police leaders in the first place, that the exemplary crackdown on cannabis in this period of time should be extended to the criminal elements whether they are or not linked to the activity of cannabis cultivation, but which continue however to be present in the life of everyday citizens.

They continue to challenge the community with their presence and deserve a harsh and uncompromising response from the State Police.

It is also important that a strong operational emphasis be placed at where the Deputy Minister and the General Director of the State Police pointed a finger, the considerable financial resources generated, the links created inside and outside the country by criminal groups and networks.

It is also very important that a strong operational emphasis be placed where I heard the finger and the Deputy Minister and the General Director of the State Police, the considerable financial resources generated, the links created inside and outside the country by criminal groups and networks. The hitting and destruction of these groups and networks cannot be understood without the hitting and destruction of their material and financial assets, which is the next objective. And let me say that this objective cannot be considered as thoroughly despite the ambition announced in the new national plan, although the first part concerning the eradication of this bad seed from the territory of the country is very important of course.

To achieve this objective it is required that the State Police, the Intelligence Service, the Prosecutor’s Office, the General Directorate for Money Laundering Prevention, tax and customs investigation bodies, and all other related structures intensify and sophisticate cooperation to increase the quality and volume of information. To deeply and professionally analyse this volume of information to intensify joint investigations both in the internal plane and in close cooperation with partners and to design and implement the crackdowns on these networks, groups and organizations.

Therefore, it must be very clear. I have discussed closely with the Interior Ministry leadership and with the General Director in more than one case, that the stage we are entering requires a crackdown that is exemplary and capillary.

Individuals with an immunity taken and imposed through the path of criminal activity as a community immunity should not dare to bully the people of this country with the shows of their brutality by breaching all the norms of coexistence. These are the situations for which we must adopt the same approach we have adopted for cannabis this year with the determination of all law enforcement agencies, and first of all of the State Police that has shown once again that nothing can stop it.

Luxury cars that challenge the law, challenge public security, the immovable property of these drivers who own them, who are luxury unemployed in this country, unjustified bank accounts, businesses unrelated to a financial growth history, must undergo a capillary process and rigorous legal verification.

Each commissariat in the Republic of Albania knew where the area of action was and where it is still to this day. Each police officer has clear where his area of action is, and that he is held accountable if a single plant is found in that area.

Every luxury car that challenges the law, the public security and challenges with its presence the public perception and the perception of the community about what a citizen should do and how s/he can live in this country with honest work, must go through the scanner of the law enforcement forces.

Likewise any suspicious bank accounts or, even in the first instance unjustified, must go through the scanner, and for this we have to thank also the General Director of Money Laundering Prevention. Anyone who owns such assets must prove and justify their origin, or these assets must be confiscated, seized and their holders have to answer before the law. I really believe that this is entirely possible and I strongly believe that the State Police in the first place and all the other actors in this table will give the citizens of this country full sovereignty in the territory. In the sense that the citizens of this country are sovereign in the territory where they live, and their sovereignty is not conditioned by the feudal of crime who have built their feuds and imposed a suppression or reduction of the sovereignty of average families and people this country. This is the challenge!

And if this challenge is faced with the same determination and with the same coordinating capacity as the challenges we are facing today, be assured that success will be the same, even more spectacular, because the front which we are talking about is very difficult and much more sophisticated in the way it should be approached.

To conclude, I want to underline that one of the keys to the success of this plan, beyond the organization, beyond coordination, was and remains the determination not to tolerate anyone within the State Police to play both sides. This is the key to the success of the ongoing operation in the fight against those who possess criminal assets.

Traitors within the ranks of the State Police should at any moment, at every turn, learn the most deserved and extreme lessons, as it has happened during the entire cannabis operation. And you have seen yourself, we all see it, the whole world that pointed a finger at Albania about this, will see what success has been achieved thanks to this determination. If they were tolerated, and if the blue uniforms playing both sides were tolerated, there would be no chance to succeed where they should.

The same goes for the “strong ones”, for those who are called “the strong”. They find their strength in the commissariat. Their strength does not rely on an unmanageable power that stems from any other direction. Their strength is inside the police commissariat, and this is where the fight against them will begin. For we know who they are, where they are, and above all they are not hiding. They are on the roads with their vehicles challenging the intelligence of every person who can see them.

Therefore, Mr Director General, the pressure of the Stat Police on these shows and on these artists who dominate the scene of community life, should start and be intensified every day, and to the extent that it becomes suffocating throughout the territory. It must be clear to all the chiefs of the commissariats and all the employees of the State Police. The entire sacrifice of Albanians to the State Police with wages that were unimaginable 4 years ago, to pay for the growth of the Logistics and Material Resources of the State Police must be translated into this motto: Those who are not worthy of this sacrifice don’t not only deserve to be among the ranks of the state police, but they should be taken before the law the same as those who have been found involved in the criminal captivity of cannabis cultivation.

All this being said, once again a very sincere thanks to all of you who are at this table and to all those who have made it possible and are making possible every day this success that has a national importance because it gives a new shine to the image of our country and society, image which has been compromised due to this phenomenon.