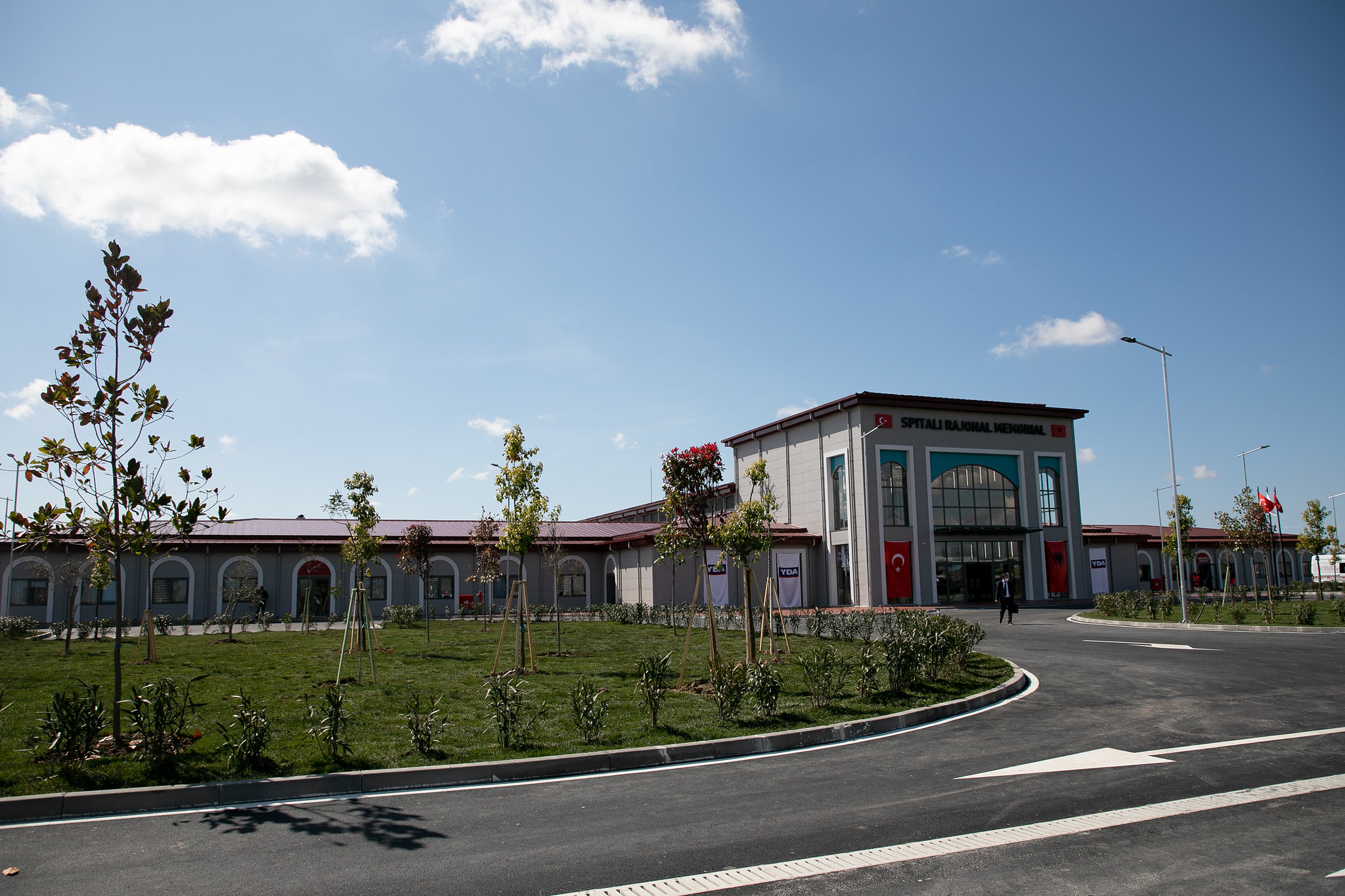 Newly-built Memorial Regional Hospital opened its doors in the south-western city of Fier, an investment adding a new care services centre to the Albanian Health system, but also an excellence and know-how centre. The 150-bed hospital offers six polyclinic services and it has 6 operating rooms and over 400 medical personnel. Prime Minister Edi Rama, health ministers of Albania and Turkey, Turkish Ambassador in Tirana, local government authorities in Fier, attended the inauguration ceremony.

Honourable my dear friend, the President of the Republic of Turkey, Recep Tayyip Erdogan!

Dear Gramoz and everyone else, including our friends who worked at this construction site!

It is really a very inspiring moment. It is a moment symbolizing the sun that is rising again in Albania following such a long gloomy and anxious period through an exhausting tunnel, where whole world is in and where we are seeing today the light steadily growing brighter in the end of it.

I would like to briefly comment on the incredible value of this hospital apart from the care services it will deliver, but its value as a transfer centre of Turkey’s know-how how that it is so generously sharing with us, so that the successful public health system of the Republic of Turkey, a model internationally acclaimed and admired, is adopted by the Albanian health system in years ahead of us.

Turkey is seen as a country that has experienced enormous developments in all areas, yet Turkey’s greatest, most significant and strategic developments under the leadership of the Prime Minister and later the President of the Republic is definitely the multiplied stock of know-how and expertise that again best demonstrates, considering the Turkey’s not distant past and present, because nations are not distinguished according to their wealth, but based on their know-how. I believe we are lucky enough that a friendly country is ready to share its know-how with us.

This makes me confidently state, this news hospital is not the end, but the beginning of a common work aimed at turning Albania’s health system into a success story and help it meets the standards of Turkey’s health system.

Not only work will go on around the clock 24/7 to provide best care services to our citizens – and I am convinced that Health Minister is right when saying that this hospital will become a point of reference not only for Albania’s south or simply Albania, but also for the neighbouring countries – but continued efforts will also be made on daily basis to press ahead with the new phase of our health system reform. And this means implementation of the hospital autonomy and practical implementation of that very model that has turned Turkey’s health system into an excellence sector.

This new reform phase would put an end to the sequels of the past that keep extending and keep existing in our health system. Today, our health infrastructure is almost completely reconstructed, with a health system no longer short of medical devices and equipment and human resources. The new management model would take us to the health system’s 360 degrees modernization that would make every Albanian citizen feel proud whenever they enter a hospital facility while accompanying their family members or when they need health care from the National Health Care Service of the Republic of Albania.

The President is watching us from his Ankara office. I would like to acknowledge you have made best decision to ban gambling. Turkey has banned gambling, we have banned gambling too, because I would indeed be the defeated gambler as the President won the bet. Yet we didn’t bet on it and therefore it is OK. The word was kept and none of the three million supervisors can find a single flaw on this project. This is the greatest success of all.

I just want not to forget – I know the President keeps notes on the issues he talks about – that at the Ankara historical meeting, we signed a series of agreements at the historical Ankara meeting and work is underway as part of the cooperation accord on development of tourism, and cultural heritage. Our teams are working on a massive restoration project in Berat and Gjirokaster designed to restore all old houses part of Albania’s precious historical and cultural heritage.

In the meantime, our teams are also working on an investment designed to attract the tourism excellence along entire Divjaka coast by perfectly preserving harmony with nature and turn Divjaka into first-class tourist destination as we will move ahead with our ambition plan to make Albania a champion of tourism in the Balkans and include Albania in the tourism champions league along with all the countries we all so much admire for their tourism, be them either in Albania’s west or east.

With the President we have also agreed on a new development leap in the area of investments that generate quality employment by attracting leading manufacture industry and by construction of modern factories, where young boys and girls will be employed.

This effort will also be crowned soon – I guess the Ambassador is monitoring this process step by step – with the opening of the Turkish Istanbul Technical University in Albania, one of the top public universities in the world, where our best high school performing students are sent for years now and they all excel there. An Albanian student was proclaimed the best performing student of that international university attended by students from all over the world. Providing the opportunity to best high-school performing students to enrol in leading international universities without having to leave Albania is one of the top government priorities. Istanbul Technical University, like this new hospital, will be the first swallow signalling a new spring in our health system and in our higher education system.

Thank you very much Mr. Minister! I wouldn’t conclude this speech without telling all Albanian citizens that our grandmothers and grandfathers today are smiling totally relieved and relaxed thanks to the mass vaccination Albania has already launched much earlier than many other neighbouring countries, which are still striving and struggling to cope with the lack of the vaccines. However, we wouldn’t succeed in securing so many vaccine doses if it was not for the precious and very sincere friendship between me and the President of the Republic of Turkey and, apart from this, his respect and special attention to Albania and Albanians.

Dear cabinet members, dear Albanian brothers and friends, I would like to extend my best greetings and most cordial heartfelt feelings with love and respect.

I am very happy to meet with you all, albeit virtually, on occasion of opening the Turkey-Albania Fier Friendship Hospital.

I would also like to extend everyone my best Ramadan month greetings, hoping may this Holy Month bring health, blessings and goodness to my Albanian brothers and the entire Islamic world.

Deriving strength from the shared culture and history, the Turkey-Albania friendly relations grow stronger and deeper day by day.

As you know, my dear friend Prime Minister, during your official visit in January 2021, we further strengthened the friendly and fraternal ties between our two nations, taking them a step further by formalizing our high-level strategic partnership.

I do strongly believe that our strategic partnership will further deepen our ongoing and multifaceted cooperation in all areas, as well as to establish other diverse collaborations.

Having done what is a necessity of our fraternity, Turkey has been providing every kind of support for Albania’s social and economic development for over 30 years.

We have stood by our Albanian brothers with all our means both in the aftermath of the September and November 2019 quakes and during their fight against the coronavirus pandemic without expecting anything in return.

Last December, we jointly attended the groundbreaking ceremony for the reconstruction project in the town of Laç to rebuild the quake-damaged homes there, which are being constructed by Turkey’s Housing Development Administration (TOKİ).

The hospital’s construction cost is estimated at around 70 million euros.

So, our high-level strategic partnership is going on normally.

As we have already promised, with the presence of our Health Minister there, we are hosting the ceremony of opening the new Regional Hospital in Fier.

Around 400 Turkish and Albanian health professionals will jointly work at the new hospital we are inaugurating today.

So, by creating a quality service in health care under modern and contemporary conditions focusing on 23 basic care services, with 6 operating rooms, 6 polyclinic services, as well as 20 intensive care units, in total consisting of 130 beds.

By providing these opportunities, Turkey will serve whole Albania, not only the city of Fier, but entire region.

I wish the hospital would lead to auspicious developments for the Albanian people as a new sign of the solidarity and friendship between Turkey and Albania, I wish from the bottom of my heart that in the geography of our heart it will bring benefit and heal as many as possible Albanian brothers.

I would also like to send my condolences to the families of all Albanians who lost their lives due to the pandemic and wish quick recovery to those infected and currently hospitalized.

I would also like to send a special thank you message to the constructor that has constructed the facility and has stabilized and paved the access roads.