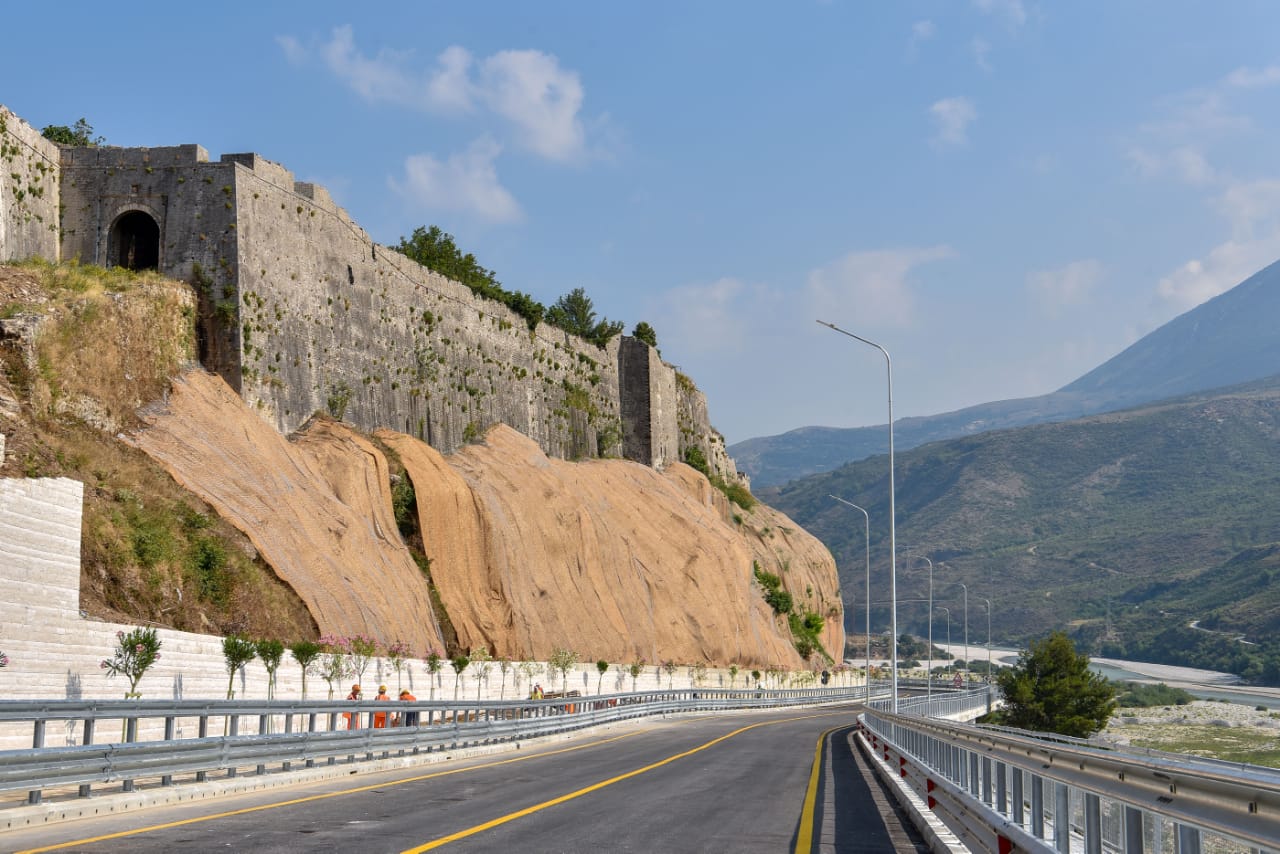 Tepelena bypass road, another important project of national infrastructure, part of the North-South axis, opened to traffic. The investment, which is expected to give a fresh impetus to development of economy and local tourism, connects two road segments, namely the newly built Levan-Tepelene highway and the road section linking Tepelene, Gjirokaster and Kakavije.

Prime Minister Edi Rama, accompanied by the Minister of Infrastructure and Energy, Belinda Balluku, inspected of the project that also entails a series of other infrastructure interventions.

“The project featured a significant number of work processes, not only in terms of layers and the construction of the bypass road, which is worth highlighting that it includes a console bridge, the first of its kind in Albania built over Vjosa River and constructed on vertical reinforced concrete columns. The project has also included many other interventions to rehabilitate Tepelene castle’s escarpments, reinforced with iron wire mesh and green fix. In the meantime, we have also intervened also in other parts of the road, given that the segment is linked to the town of Tepelene. The road has sidewalks for pedestrians on both sides. The old bridge built by Ali Pasha, a monument of culture in the area, is also undergoing a reconstruction process,” Infrastructure Minister Belinda Balluku said.

The Mayor of Tepelene Tërmet Peçi noted that investments of this size have not been implemented for decades in Tepelene: “Tepelene hasn’t seen such investments over the centuries, let alone over the years. The bypass road project is the largest to be implemented in Tepelena,” he said.

On his part, PM Edi Rama said that the newly-built bypass road will have a significant impact on development of local economy and tourism in Tepelena, Gjirokastra, and entire southern region of the country.

“Tepelene’s access to the sea will connect entire district of Gjirokaster with Himara to complete to tourist package. From a kind of a fake pocked, the area becomes a development centre,” PM Rama said, adding that local Tepelene residents will now have the chance to turn the previously terrible situation into a situation of economic development source. The Premier went on to say that Tepelena castle will see a growing number of visitors during the tourism season.

The old arch bridge has been also expanded under a project that has preserved its architecture intact. In the meantime, the town’s monument square has been also reconstructed. Two sidewalks have been also constructed along the first and second segment, serving also a long thoroughfare and walkway for the pedestrians. The whole segment is equipped with lighting and all elements of signage and road safety.

The castle’s escarpments have been rehabilitated, preserving the historical nature and architecture of the site. “Ali Pasha” Square is paved with stone tiles and 7 red plane trees have been planted. To protect the area’s ecological system of, some 550 decorative trees, acacia, and oleander have been planted along the entire stretch of the road.

At the request of the Municipality of Tepelena for the completion of the project with urban elements, the Technical Council of Albanian Road Authority has approved the construction of a protecting wall to protect the escarpment of the castle, as well as the construction of a retaining wall along the castle. Construction of a belvedere with benches and greenery will also be built at “Ali Pasha” square,  which will serve as a tourist attraction, and it is planned to reconstruct the two columns of the old Roman bridge over the Vjosa River that are in danger of being destroyed, as well as lighting along the entire retaining wall.