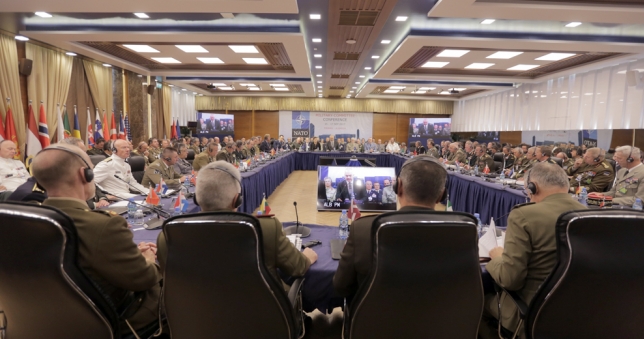 Albania finds it difficult to do great things, but we can do small things with dedication and great professionalism.

Just until recently, when many of us here were students, you were considered as “bad guys” in this country. But times have changed and today you are “the best guys”. Thank you for coming here! I hope you are enjoying being together in this wonderful place.

The first meeting in NATO of the NATO Military Committee gives this meeting a historical dimension, while, of course, for me and the new Defense Minister of the Republic of Albania, as well as for all Armed Forces our country is a special honor and obviously, a great pleasure to have you today, here in our country. I do not believe there is another case when you have so many friends at home that bring so much security to your home.

I have been able to see closely the considerable transformation of NATO, which, according to Secretary General Stoltenberg, has now entered into the so-called third age, third time, ‘Third age’.
Two historic summits in Wells in 2014 and then in Warsaw in 2016, as well as the meeting of heads of state and government in Brussels in 2017, marked an important transformation of the alliance. The first NATO, the one I spoke about in the first second, of 1949-1989, was alien to the official Albania, and little by little, year after year, a reference point of hope for the Albanian people.

A people who had far more guns than freedom and than well-being. The second NATO, 1989-2014, was ours. Leaping somewhat outside the initial framework, crossing its old borders, NATO cut off a fierce ethnic cleansing in Europe. The survival of the population and the freedom they enjoy today, Bosnia and Herzegovina and Kosovo, are behind none discussed the fruit of the second NATO, which included in its mission the freedom of peoples living outside the territorial boundaries of its action.

During this period, in 2009, Albania also experienced the moment of full membership in NATO. This event marks one of the important milestones in the country’s history, which for many more than decades suffered the consequences of a deeply undesirable separation from the most developed world, or as we have called the West at the time.

While today, when NATO’s third has begun to take shape, Albania is itself NATO and as a member country, Albania needs to count not only the benefits but also the serious responsibilities that derive from NATO membership. The arch of instability that marks the eastern and southern boundaries of the alliance, the waves of extremism and terrorism, as well as other global threats, are important factors that determine Albania’s security and defense policy, international and regional responsibilities.
As a country where public support for NATO is among the highest, Albania has been politically easy to be very active in participating in the Alliance’s military engagements. In a way, we have come to join the Alliance’s mission, or other engagements, in co-operation with our members in NATO at a supranational level. Insofar as it has been politically easy and to give an example, Albania’s NATO missions to date have not received any vote against the Albanian Assembly, our broad participation in these missions has not been a challenge easy for the country’s limited resources.

However, in meeting our commitments in Wells and Warsaw, an ambitious modernization program will be accompanied by the progressive increase in defense spending. Just as, in continuity, our Armed Forces will be present in every case and front where they will be called. They are present today in NATO missions in Afghanistan, Kosovo, Latvia and the Aegean Sea. As well as parts of the EU missions in Bosnia and Herzegovina and Mali.

In the future, we will also contribute to the implementation of the broad spectrum of NATO commitments under the Defense and Deterrence, Enhanced Forward Presence and Projecting Stability Beyond our Borders.

Generals and Admirals,
one of Albania’s important responsibilities in NATO is its concern to contribute to transforming the fragile and problematic Balkan region into a region of peace, democracy, stability and prosperity.

With the entry of Montenegro into NATO, which Albania has strongly supported since the very beginning, our alliance apart from the Atlantic became completely “Adriatic”. Already the Adriatic Sea has become an internal sea for the Alliance, giving it control over a very important maritime asset for European security.

However, the NATO map is missing from Bosnia and Herzegovina, Serbia, Kosovo and Macedonia. This area, still not organically included in the European security architecture, is a factor of strategic ambiguity for our Alliance.

As well as a territory where third actors see vulnerabilities and opportunities for penetration.

Albania, as a country that borders or interacts in many ways with these countries, has an interest but there is also a special responsibility that this organic part of the region and our continent becomes a factor of its sustainability and prosperity . In fulfilling this responsibility as a NATO country, we have tried and achieved, I believe, not least, in a continuing process.