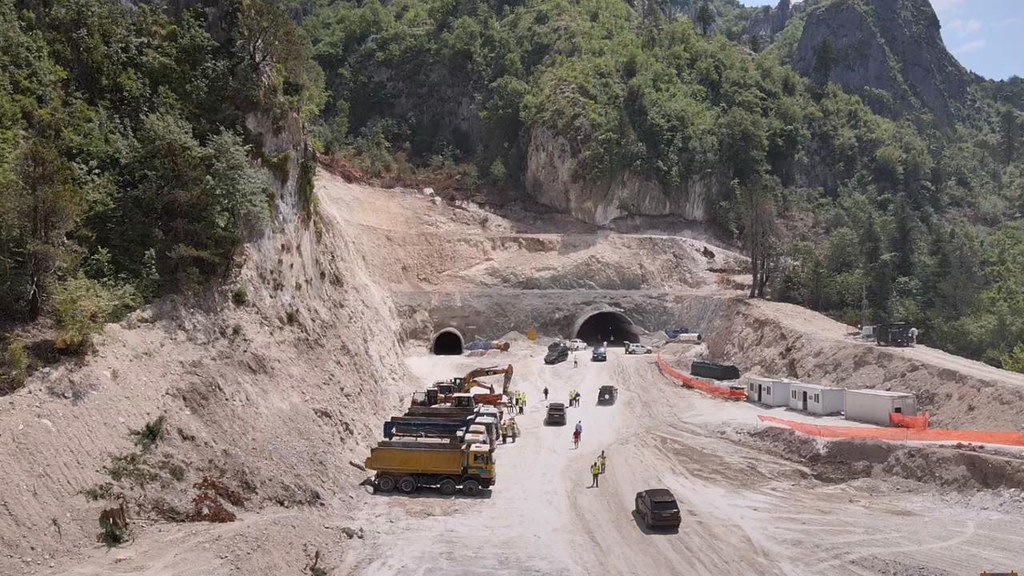 Prime Minister Edi Rama today inspected the ongoing work on construction of the Skarfica Tunnel along the new road linking Kardhiq and Delvine. The new tunnel will drastically shorten the distance and the drive time between Tirana and the southern tourist resort town of Saranda. Prime Minister Edi Rama, accompanied by the Minister of Energy and Infrastructure Belinda Balluku, closely inspected the ongoing construction works on the 1.3-km long tunnel.

“Around 50% of the construction work has already completed. The construction work has progressed steadily also thanks to the favourable geological formation and structure and the project is scheduled to complete within 12 months and I am confident this tunnel and the Lot 7 of the Kardhiq-Delvine road will fully open to traffic during the next summer season. The entire road project includes eight sections. Work on the first three sections has already completed,” Infrastructure Minister Balluku said.

Prime Minister Rama described the project and the road network in the country’s south as crucial to provision of the infrastructure connectivity between the regions of Gjirokaster and Korça. “It is important that we have ushered in a final stage of building a complete infrastructure network for Gjirokaster, Tepelene, Përmet, Erseke, Korça. This whole area is set to be transformed into a completely different tourist platform by next tourist season and the new infrastructure will definitely attract a fresh investment drive in agriculture, farming and agritourism businesses. The new infrastructure creates a secure perspective for the whole area, not to mention the inner parts of the urban areas and cities that will keep being revived and becoming accessible for the visitors,” PM Rama noted.