Klos, one of the starting points of major Arberi Road project 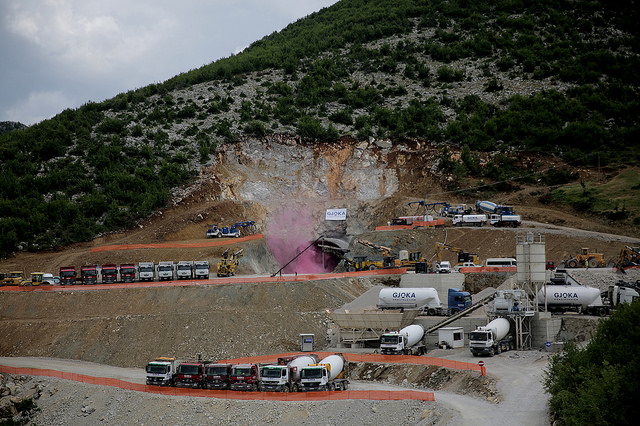 Prime Minister Edi Rama’s remarks at ceremony marking the start of construction of the Arberi Road, a two-lane highway linking Tirana with the north-eastern region of Dibra, at the construction site near the tunnel in Klos:

It is true that 550 years since the death of our Dibra-born national hero, Gjergj Kastrioti Skenderbej, it is still hard to reach these Dibra epic battlefields, which decided the fate of our nation, due to the lamentable state of the existing roads. These roads were abandoned to their fate for over 20 years, but if things were to be well-thought-out at by designing first the right projects then the Arberi Road should have completed at least 10 years ago.

But, unfortunately, the government which repeatedly pledged with great fanfare like no other administration, not only it did never complete the road, but it just scratched it, just like it did all over Albania shifting all the burden on us to construct the country’s roads, but leaving behind a huge hole of accumulated debts.

Upon assuming office, our government found five contracts worth of 2.6 billion lek but not a single cent in arrears had been paid to the private companies. Of course, the road was nowhere to be seen, but just traces of festive events with drums and ribbon cutting ceremonies to pull the wool over the people’s eyes.

The situation was the same all over the country and I would like to reiterate this for all those who think building a road is just like writing a Facebook comment, in the blink of an eye. However, building a road first takes creating a design, providing the funding for the project, signing contracts and exercising a serious and effective supervision. None of the four were done until we took over.

Pretty patchy projects like the one on the Nation of the Road, with everyone of you and every Albanian being accustomed to the news stories reporting over massive landslides and debris raining down along the highway threatening the people’s lives. The highway includes 37 high-risk road sections and it offers no safety standards, because the project was not designed properly and work was shoddy.

When our government took office, we found huge accumulated arrears under the Albanian state’s road transport program. Over 43 billion lek, 400 million euro in arrears, around twice as much as this project’s total cost, a debt that was sinking and ruining the country, just like the failure of large-scale Pyramid schemes did in 1997, but also suffocating many companies which had bankrupted or had been nearly bankrupted, since the banks had frozen their assets. Whoever says we haven’t built a single kilometre of roads is wrong. They are completely wrong.

By the end of 2017, we have allocated 37 billion lek in funding for road projects. Building kilometres of roads doesn’t mean launching and holding tenders, but build these kilometres of roads. And apart from the bills on those disgusting fanfare shows and ribbon-cutting ceremonies, which turned out to be five inauguration ceremonies for five short Arberi Road sections, without doing nothing, we have settled payment for nine deals signed for the construction of the Plepa-Rrogozhine which is yet to be built up the required standards. We have settled payment for two contracts on construction of Kukes-Krume road and many other road projects.

There were 67 unpaid contracts on roads under construction.

How can a government put hundreds of kilometres of roads out to tender without securing the funding first?

It can be done by the government of a man called Sali (Berisha).

Just like he did with the Pyramid schemes, which buried Albania. Te same he did with the road contracts. He granted contracts on roads construction in exchange of votes, while roads were totally abandoned along with the accumulated arrears.

Construction works on around 334 kilometres of the contracted road projects had yet to kick off, whereas 208 kilometres of roads were not certified.

Not only we settled all accumulated arrears, but we also reconstructed more than 320 kilometres of roads.

Of course, a lot more had to be done over all these years of efforts to build serious state and infrastructure and of course a lot more could have been done should the roads were not to be built hurriedly and carelessly, after gaining votes. If there is something we are not to blame for that is the fact we didn’t abandon the roads.

We assumed responsibility and settled the arrears accumulated by the previous government for public works, while at the same time we are constructing roads step by step.

As for the Arberi Road, we found a much more complex and costly project which included the construction of a tunnel without emergency exit to provide safe escape. A three-kilometre tunnel for the people to drive in, but without having an escape route for them to escape in case of an accident. Building a three-km tunnel without an emergency escape route is prohibited all over the world, including Africa. The new project includes also the town of Klos, which was excluded from the project of the road.

When travelling to here, I saw 20 or 30 people protesting. They are not to blame as a member of the parliament was heading them like the singers and dancers in the movie ‘Concert in 1936”, hired to chant: “Rama go! Rama go!” And I was informed that Sali had posted photographs captioned “Dibra greeted Rama with protests.”

In 2009, addressing the parliament, he used to say “this four year period will mark the completion of the road network, which will halve the distance between Tirana and every corner of the country. Vermosh too was to have its distance with Tirana halved.” Saranda, Gjirokastra, and even Tropoja were to have the travel time halved, according to Sali. The same goes about Dibra and Korça. The he used to say that the Arberi Road, Tirana-Elbasan highway, Qafe Plloçe-Qukes road, and entire southern axis were to complete within two years by 2011. Roads between Elbasan and Belsh, Kuçove and Berat, Kardhiq and Delvine, Konispol and Sarande, all these roads were to complete by 2011, while he also claimed that a four-lane Shkoder-Vlora highway was to be built.

Where are all these road projects? The country sank deeper into debt.

Tirana-Elbasan highway project is another catastrophe as he was seeking to open the tunnel ahead of the general elections. He set off with drums and fanfares to inaugurate the tunnel where no project was prepared for the highway. We had to redesign the project from scratch and the project’s cost ran high, because he was hurrying to earn votes from the Elbasan citizens, but got nothing.

The new project and the due funding have been made now available to complete Tirana-Elbasan highway within this year.

Have you heard him saying that the Fier bypass project has been already completed by his government? He considers a road complete once the project is put out to tender.

The Fier and Vlora bypass projects is a terrible story, a misery project with ghost companies grappling with each other. We had to terminate the contract, review the project together with the European Bank for Reconstruction and Development.

The construction works on Fier bypass will commence in September and the project will complete next tourist season. The works on construction of the Vlora bypass will also start soon but its completion will take a little bit longer, because it is a more complex project.

The program also includes support in funding for other major road network projects as part of the largest public works, infrastructural rebirth investment and development projects ever implemented in the country.

My dear friends, I would like to thank each and every one of you for attending this event. I am sorry for the endless torture for you. I would have wished to complete these projects much earlier, but public works and the government work are not like the Facebook comments you can write in the blink of an eye. They are complex works that take great commitment, time and patience. I know patience is today’s most expensive good in Albania,  because people are fed up with tolerating and enduring, but I would urge everyone not to involve me in a 20-year-old  story before I took office. We are ready to assume our responsibility for everything we are tasked with and we are in charge of.

We make mistakes, because those who work hard make mistakes, but we never do wrong things with this country! Because, just like I started this speech by quoting our national hero, I would like to conclude by quoting the same saying, which is one of my work motto: “Whatever happens, I will be a friend of virtue and not of destiny and in the end, together with all my comrades-in-arms we will do whatever it takes to win back the time we have wasted for decades.” And hoping that patience that is the most expensive gift will be found in that community of debate and discussion communities, you are invited to criticize us anytime and as much as you want.