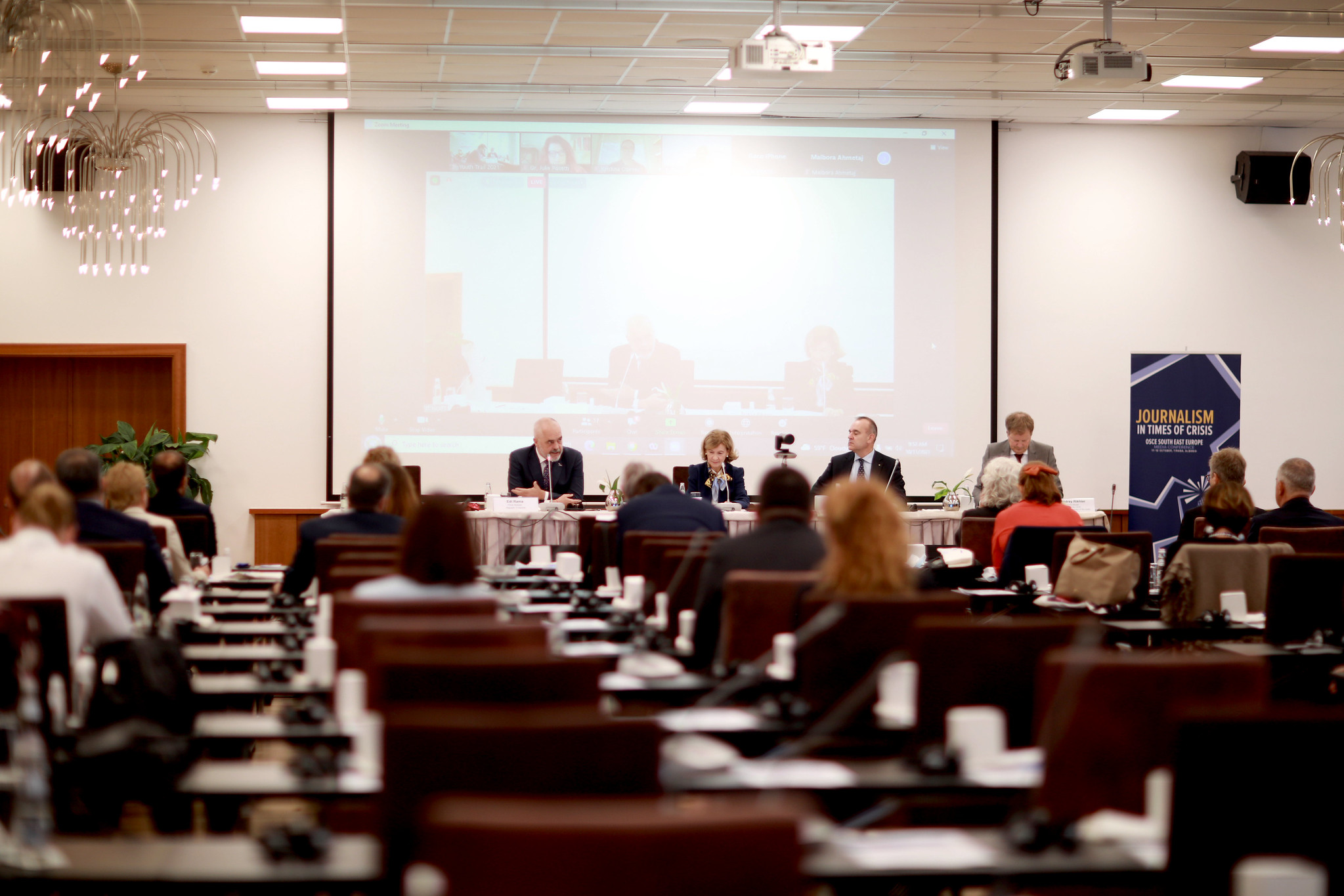 It goes without saying that I am really pleased to be here after having already discussed with the OSCE Ambassador some time ago about ways how to strengthen our cooperation and how to put our efforts together in order to create a better environment for the freedom of the media and the people involved.

But on the other hand, I have to admit that I am not precisely the right person to be invited in this kind of gatherings, because of my opinions that somehow differ from the politically correct ones when it comes not the freedom of the media, but the way how in the name of freedom so many things run against the notion of freedom are happening. Of course I am referring precisely to the online fake news dissemination, I am referring to certain behaviours that tend to be against the freedom of other people, tend to be against the rights of other people, and tend to be against the common sense.  When it comes to the real journalism, which is based on the truth, which is based on the fact-checking and clear sources and of course which is based on the sense of the mission to represent a real fourth power and take over other powers in the process. And of course I think there is a very thin line and by no doubt it is always dangerous to try and combine and make both live in harmony when it comes from one hand to respect the total freedom of journalism and on the other hand respect the freedom of the citizens.

But on the other hand, I don’t think that the best way would be shying away this challenge and simply keep a position where you say in the name of freedom we have to simply bear the amount of lies, allegations, slanders and extortion that are a serious problem nowadays. I think we need to reflect on that.

We have perhaps learned it in the hard way that this is not just about the government or the parliamentary majority or less so it is about small countries, because when it comes to facing this challenge, of course we have also to face a whole wave of prejudices and a whole wave of reactions coming from “the politically correct” world. I think this is about the concerted efforts of all democratic societies and the democratic countries, and hopefully starting from the strongest ones to stand against the freedom of reach as equal to the freedom of speech, because it is not that way, but it is completely the opposite.

When you just try to imagine what, for example, the Nazi propaganda machine would have done to the world with such a freedom of speech. It is breathtaking. Or when you, without needing to imagine it at all, try to assess what a damage is being inflicted in the everyday life by the sources of evil in this world, from terrorism to all kinds of fundamentalisms, and to the paedophilia and all these diseases of the modern society that through the freedom of reach can really reach and touch a lot of human beings, a lot of marginalized groups and very weak parts, so to say, of the organism of our societies.

And I would like to conclude by highlighting a personal experience from quite some time ago, when I was invited to write a piece for The Guardian. It was in the early’90s and it was my first experience with the international media. I was really shocked about how accurate they wanted to be in publishing my little piece, because they didn’t publish it. They wanted first to check with me if they could change the title. I was not able to respond on that same day, because it was the time when the mobile phones had yet to be invented and therefore they were waiting for me to respond.

This experience was then followed by another one, even a more striking one, with The New Yorker, when Jane Kramer came here to write a portrait of mine. She spent around a week and she met many people and before leaving she said: “I have to tell you that there is one more thing left and you have to be prepared to go through quite a neurotic process of fact-checking of my own article.” I didn’t really understand in the beginning, what she was talking about, but then I realized that they wrote to every person mentioned in that article, even for very simple and trivial things, they wanted every person mentioned in that article agree on every word  quoting them. When I told her this was perhaps too much, she said: “But this is the reason why we have never lost a court case in the United States.”

If you were to compare what is happening now on daily basis with this never-stopping flow of information via the online media and with how many times you have to realize that you are misquoted, sometimes not simply being quoted wrongly, but you are exposed as having said things you would never think about, let alone say them, this is really something and beyond of what this kind of search – I am terming it as search in order not use another word for audience, for likes and for reach is doing to people that are in office and if you go beyond the people in office and think about normal people, ordinary citizens, what a harm it does to them. It is really unbearable. It is absolutely criminal. After all, when you are a politician, when you are an elected official, and when you are in office, you may train yourself to survive it and you may tell yourself this is what it is, as the legendary Donald Trump would say, and I have to live with it. That’s it. Because all the ways to counterattack are potentially dangerous to yourself, since you would immediately be labelled like a person going against the freedom. But when you see your kids, your family, when you see the others’ families and kids being harassed publicly through lies, slanders, and totally baseless allegations, what are you supposed to do? You would go to the court? What then? For a court case it will take years to handle the case, but in the meantime the damage, the harm is done.

I am sure that people here are familiar with that assessment made about the spread of information via Twitter, where actually an inaccurate or completely untrue Twitter posts had a far higher reach than the true posts. This is simply one of the many similar examples.

However, I think that letting it go and simply preaching for freedom in front of such disastrous waves of lies and untruthfulness is not the answer. I don’t have the answer, because I had the answer may be I would have won myself a Nobel Prize, but I don’t have it. That’s why I am very happy that journalists were awarded the Nobel prizes and I am really respectful towards all of those who respect themselves and their mission and fight for the truth all the way, facing even brutal and dangerous regimes.

But, frankly I am not optimistic about what is going on and I don’t really understand why the TV broadcasters or the newspapers have to be regulated and they are actually regulated, while the online media cannot be regulated. Of course, I listen and I hear clear and loud that there is a so-called self-regulation, but I am not sure that self-regulation is the answer vis-à-vis the speed, because the speed is beyond the limits of imagination of human beings, when it comes to the volume that need to be processed to keep reaching out or the need to just be clicked and be the first let people know about something in a competitive way. This is not about a day, but it is about one second and it is really devastating for the integrity of the truth and the integrity of the media itself.

Without having the answers for all of these, I will stop here, because I think I said enough for me to be again attacked. So I don’t need to say anymore. Thank you!