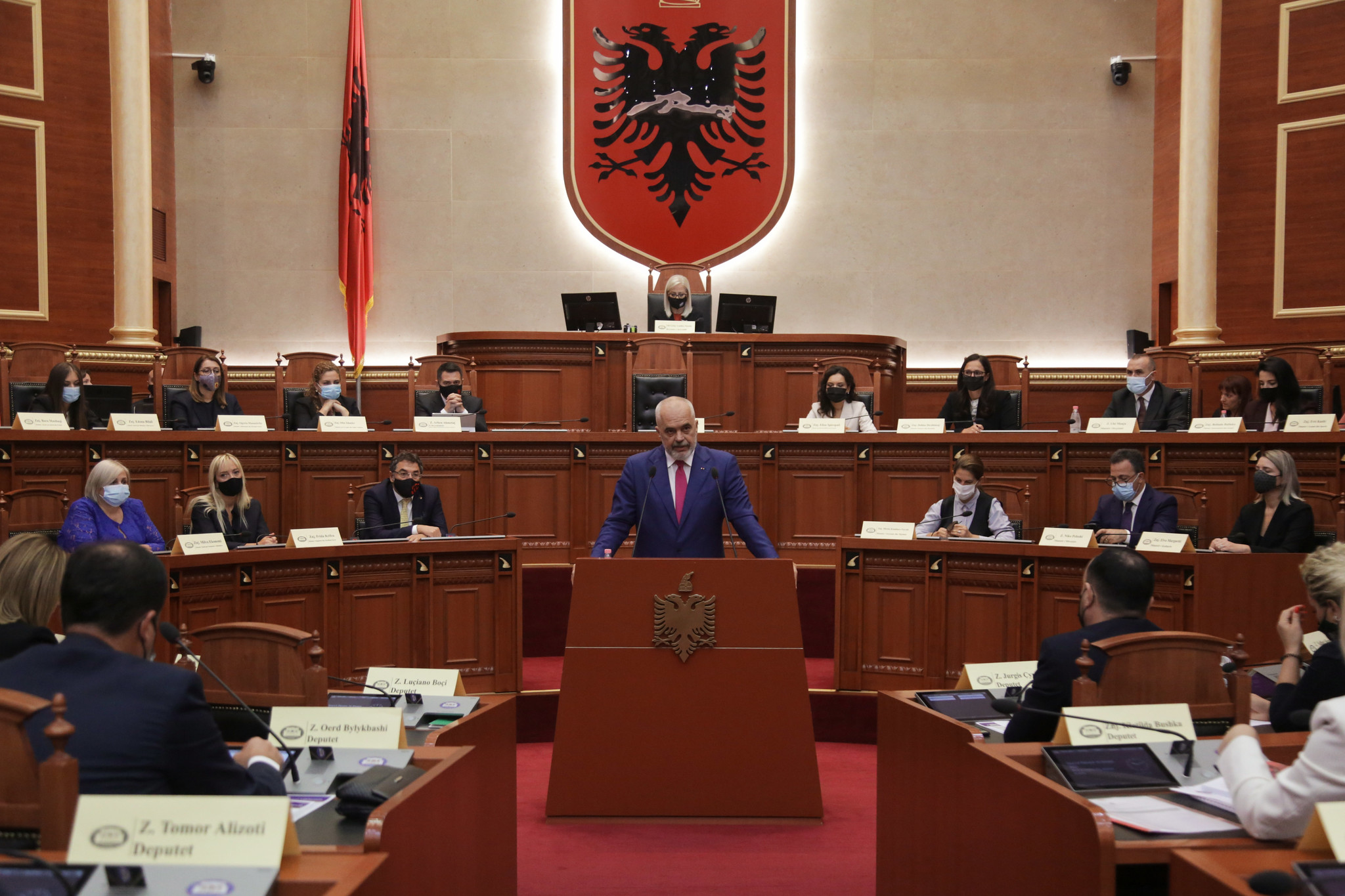 Facts are facts. You can tell Albanians whatever you wish to tell them, but it is the citizens’ wisdom and intelligence judging each of us. It has been five days now with the citizens judging us and telling you: “Hey, these are not the best, but you should forget it.”

At the yesterday’s EU-Western Balkans Summit, all the rich and less rich EU and Western Balkan countries were concerned and focused on what we can do together, just like we did when dealing with the pandemic, so that we can best weather the storm of energy crisis. While you, both sides, the hostage and the hostage taker, are both telling people that “Albania has nothing to do with the international market, Albania is not dependent on the stock market prices, since Albania is rich in water sources.”

What about drought? Does Albania face drought?

Does Albania address to the international market to purchase electricity?

Did you access the international market to purchase electricity when you were in office?

You are telling Albanians that the electricity bill in Albania is the highest in the region. This is not true!

It is simply untrue, just like something else is also untrue. The electricity bill and any other bill in the system we have chosen and the system you are rightly proud to have been at the forefront as an epitome of the anti-communist movement, we have decided to transit from the centralized communist economy, with prices being decided on orders issued by top-level officials, to the capitalist market economy and an increase in stock market prices of any product, be it electricity, oil, fuel, wheat or whatever else, doesn’t depend on the fact that Spain is richer or that Albania is poorer. You, the center-right party, you the market liberalization party, but when one listens you talking, if one doesn’t know your background, would think you are the remains of the Labor Party judging on the way you comment. Your concepts are the remnants of the old system.

(Shouting and throwing insults are not arguments. I am insulting nobody, although we randomly hear screaming and abusive speech. I don’t want to involve in debates with you. You are facing a problem that I can’t resolve).

With the carbon tax included, is it true that the oil price today is cheaper than the day when you left office?

I am going to provide some data.

(I would ask you that we agree so that others listen silently when one speaks, just like we listen to you when you take the floor, although you say almost nothing to… For me it is very easy to let you talking, while I leave because I have a lot of other things to deal with. I attend these sessions out of respect for you, for Parliament and out of respect for those who have voted you. It is not my duty, but I do so out of respect and, please, can we agree to listen to others when speaking, no matter whether you like it or not?)

I am providing figures. The charts are there for everyone to look at.

How much a driver used to pay for oil and gasoline when you were in office, and how much do they pay now?

A litter of oil costs 177 lek today, and 182 lek eight years ago. While the today’s price also includes the carbon tax.

And this has nothing to do with the bread price and I would like to inform you that the bakeries today pay a preferential electricity price. The bread price hike has to do with nothing else but with the international and the stock markets. We have chosen – and you have been part of it and became the political embodiment of that movement – the free market economy and we have chosen to live in an open country. Being an open country means that you take advantage of all benefits, but also bear the brunt of the blows that can ensue because of being an open country. If we were still in communist-isolation era, perhaps the virus wouldn’t have been able to enter the country either, because no one was allowed to go abroad, and nobody came from abroad. But all these things go together.

As far as the energy crisis is concerned, Albania lacks the power generation capacity to fully sustain itself on energy and be unaffected by the international market that’s why the government is working on a series of projects to diversify the country’s energy sources because we can’t afford being almost entirely dependent on hydropower. This is because in a season of abundant rains, not only we are unable to collect reserves, and just like you did in the past, we are unfortunately forced to do again, because you did nothing at all to do what we actually did to build Skavica hydropower plant and therefore we are forced to open the dam gates in the event of torrential rains and flood agricultural areas.

Two solar energy projects are being implemented in two districts of the country. We are about to launch construction project on a wind power plant. Talks are underway not only about Skavica HPP, where work has already kicked off, but also on Vlora thermal power plant to transform it into a gateway to the liquefied gas from the United States. All these projects will allow Albania to become an energy net exporter within this decade. It is only then when the country will no longer be dependent on hydropower only.

However, I have chosen to respect the people’s intelligence, while you have decided to mock with the citizens’ intelligence and the outcome is obvious. It is my choice to respect it and openly tell people this is the situation, this is our challenge and just like we didn’t leave our citizens alone neither in the face of the earthquake nor in the face of the pandemic, we won’t let them alone again. Therefore, I invite you not to hastily declare that the government would increase the electricity price. Don’t hastily issue statements over the alleged increase in electricity prices, because you would sound ridiculous.

By denying the crisis, allying with the virus, the earthquake, floods, allying with the energy crisis you will not become an alternative and if you were to be an alternative, you would also have become a potential choice. But you won’t be elected, because Albanians are not fools, although you treat them as such as if you were beings landing from the Moon! You act as if you have never been in power! As if you have never been through countless difficulties and tough times, despite the way you have handled and treated them!

You talk about structural reforms, but which ones? You talk about energy, but when it comes to energy you should actually impose a silence moratorium for a whole generation that you plunged into deep pit because of your energy policy and the chaos you sow by taking a blind eye to the electricity theft for the sake of earning a handful of more votes. You left behind the deepest hole in the history of Albania’s energy sector.

Of course, you are seeking to play with facts, just like you do with the opinions. An opinion is an opinion, but facts are facts and figures are figures. Take a look at the region, take a look at their energy prices and the salaries. I acknowledge that the salaries are still too low vis-à-vis the challenges. I acknowledge that the salaries and income in some other countries are higher. But how much is the electricity price in those countries?

Precisely, in order to prevent citizens and the vulnerable social categories from bearing the brunt of all these, Albania is the only country in Europe to apply zero tax policy on the small business and zero VAT rate on businesses with annual turnover up to 100 million lek. Could you find another country applying such tax policies? It is all about revenue that we have deducted and excluded from the state budget collections.

You have found your solution by alleging over “thieves, oligarchs, concession contracts,” but all these claims are valid and fall to the ears of only those who blindly trust you, but fortunately they don’t represent a majority and they will never become a majority. The majority doesn’t listen to you blindly and they don’t care at all about what the hostage or the hostage-taker say.

You can’t fool the majority of the citizens. Because I am convinced you genuinely and always surprised to wake up on the morning after the elections and find yourselves losers and try to excuse it by alleging over supernatural or underground forces. No, the reason is here. What goes around comes around every four years. This is the essence.

I would sincerely again beg you, we are here strongly willing to debate, definitely, as a fervent debate as you want, but don’t come hot to the heels of people, and don’t throw insults and false accusations against them.