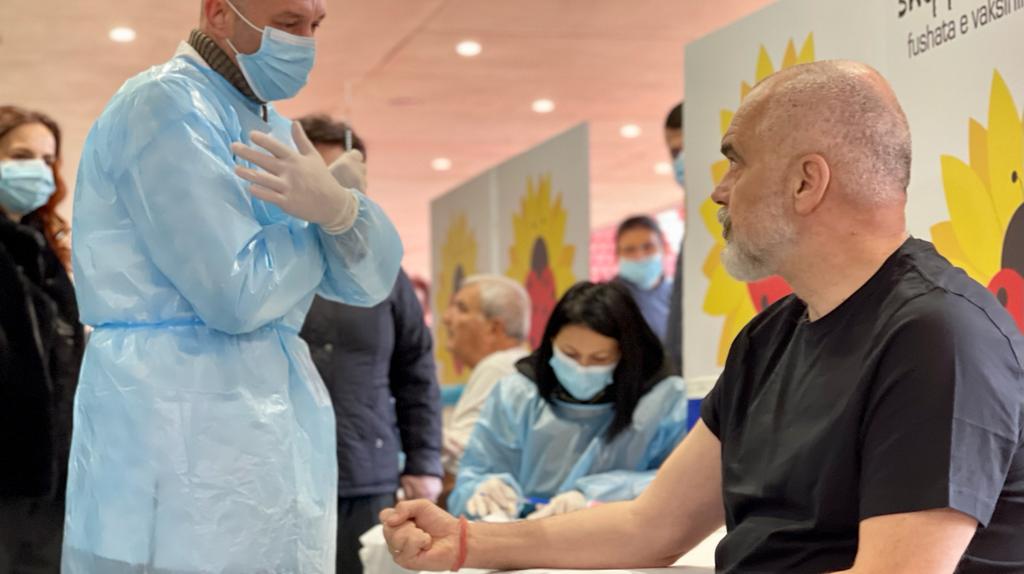 The vaccine was randomly picked by two journalists, who were reporting on the vaccination process, while a third female reporter randomly chose the dose to be administered to the government head.

The Covid-19 booster jab, which should be received no earlier than six months after completion of the two-dose primary vaccine course, is a must to ensure stronger protection during winter amid global concern over recent emergence of new coronavirus variant Omicron.

After receiving the jab, PM Rama issued remarks to reporters:

“As you already saw for yourselves, and I think you will help to show it as it happened, I received the booster dose today, a vaccine randomly selected by two journalists and a third female journalist who also randomly picked among the two sorts of vaccines,  because I can’t really figure out how one can distrust science in 21st century, how one can distrust authorities and instead they choose to believe in some charlatans and delirious individuals, who share all sorts of conspiracy theories via the internet.

How come that one believes this is all a game of deception at the expense of the entire planet and no serious press, TV channel and media is silent on it? So, all the international media in the United States, Australia, Iceland and elsewhere have been silenced, while the ones to speak up about it have nothing to do with science, nothing to do with humanism and public health.

The academies throughout the world are calling on people to get vaccinated, while a handful of individuals have embarked on a conspiracy stream via Facebook and other online networks.

This is scandalous and shameful! Moreover this is to insult your own intelligence by choosing to trust them rather than science, although facts are clearly showing that people are dying because they refuse to receive the vaccine, while those who contract the virus, although vaccinated – because vaccines cannot completely stop people from being infected, but the jabs protect them from death – experience milder symptoms. What else can be said, but get vaccinated?

Austria has imposed a total lockdown, while other countries are introducing all sorts of restriction measures. We have done utmost efforts to relieve everyone psychologically and refrain from distressing various sectors in our country. However, it should be clear to everyone that we can’t afford letting such a situation run smoothly no matter what happens, because we take full responsibility as we have done to date and as we will keep doing to the very end.

I would urge primarily all the public administration employees to receive the Covid-19 vaccines, because a day may come when they won’t be allowed to report at the workplace without presenting the online vaccination card. If they are banned from work, they will stop receiving salaries from the taxpayers’ money, just because they don’t wish to get vaccinated.

I call on all of those who exercise their activity in public spaces, namely in markets, indoor venues, to receive the vaccine as soon as possible, as they can be banned from entering supermarkets and shops if unvaccinated.

I call on all of those who own or run a shop to get vaccinated, because their shops could be shut down if they are not vaccinated, and I call on everyone else, because we can’t afford risking the majority of population just because a small minority of them defies science, health, their own and their family health.

I don’t understand. It is pretty clear to everyone what happens after the vaccination; more so now with the entire world being increasingly concerned over the new variant. New research is being conducted, yet it is for sure that the vaccine provides protection and saves lives.

How come one is minimally that watchful and observant when seeing what is happening with those hospitalized? The vaccinated people experience mild symptoms, while the unvaccinated ones can end up in the death grip.

The message is clear. We are carefully monitoring all the ongoing discussions through the respective Committee and we are observing what is going on around the world. It is clear that the decision could be made to force anyone entering Albania to show the vaccination passport, whereas the unvaccinated people won’t be allowed to spend holidays here. So, everyone has to be vaccinated.

PM Edi Rama: No, vaccination is not mandatory. This is not compulsory, but it is what the whole world is doing. You may visit Italy and try to enter a public space without showing the vaccination card. The same goes for France, Austria and every other country. Of course, it is their right for people to refuse to be vaccinated, but they can’t threaten other people.

PM Edi Rama: The university students should receive the vaccine too, because the day may come when they won’t be allowed to enter classrooms if not vaccinated.

PM Edi Rama: This is what all EU member states recognize and it has to do with recovery. I am talking about vaccination, namely the green card vaccination waiver. So, please don’t try to confuse everyone.

–You are discriminating Albanian citizens, as you issue the green pass to them after they recover from COVID. You recognize the green card of the visitors upon entering the Albanian border crossings only. This is the decision announced by the Minister of Health on August 30.

PM Edi Rama: Do you have any other questions about vaccination?

–When the day will come for Albania to become like Italy, France or the countries you mentioned, meaning that one cannot enter the university, public or private institutions or bars without being vaccinated.

– I am a person who has contracted and recovered from the virus twice and I haven’t obtained the green pass. You have discriminated against an Albanian citizen.

PM Edi Rama: Gentleman, again, I urge you not to cause confusion! We are talking about people who should get vaccinated. The decision is clear when it comes to other people and we can pretty easy clarify on your alleged discrimination without causing confusion among the public. We are here to talk about vaccination and not about confusion. You can talk as much as you want when we engage in discussion about other issues. I didn’t rule your question out. I said that we are encountering a category of individuals, who trust the internet nonsense about alleged international conspiracies and alleged plans to exterminate retired people, about a mysterious dark force that has gripped the stupid world. These allegations are dangerous, because this is about the citizens’ lives. You are welcome to express your opinions when we discuss detailed implementation of these mechanisms and I would be grateful for raising such an issue. But this is not the case here. We are here to talk and issue a joint appeal to everyone to get vaccinated. Have you received the vaccine?

– No, I have recovered twice from the disease.

PM Edi Rama: Well, you should get vaccinated, because you won’t be allowed to take part in press conferences.

–My mother was vaccinated and she experienced serious symptoms of the disease.

PM Edi Rama: How come you don’t feel ashamed and engage in such a debate in the public eye. This is ignorance and madness, just for propaganda purposes.

PM Edi Rama: Once again, this is purely ignorance, because it has been repeatedly and clearly stated that the vaccine doesn’t offer protection from infection, but you should look up at the percentage of death among the vaccinated and unvaccinated people. What is the percentage of vaccinated people who enjoy best protection when contracting the virus? And this debate is shameful, because this is about the citizens’ lives and this is precisely the reason that everyone being given a microphone or show up on a TV studio should behave responsibly and should not stage a show. This is the essence. What are you doing here, the way you intruded here is scandalous, because this is all about the citizens’ lives.