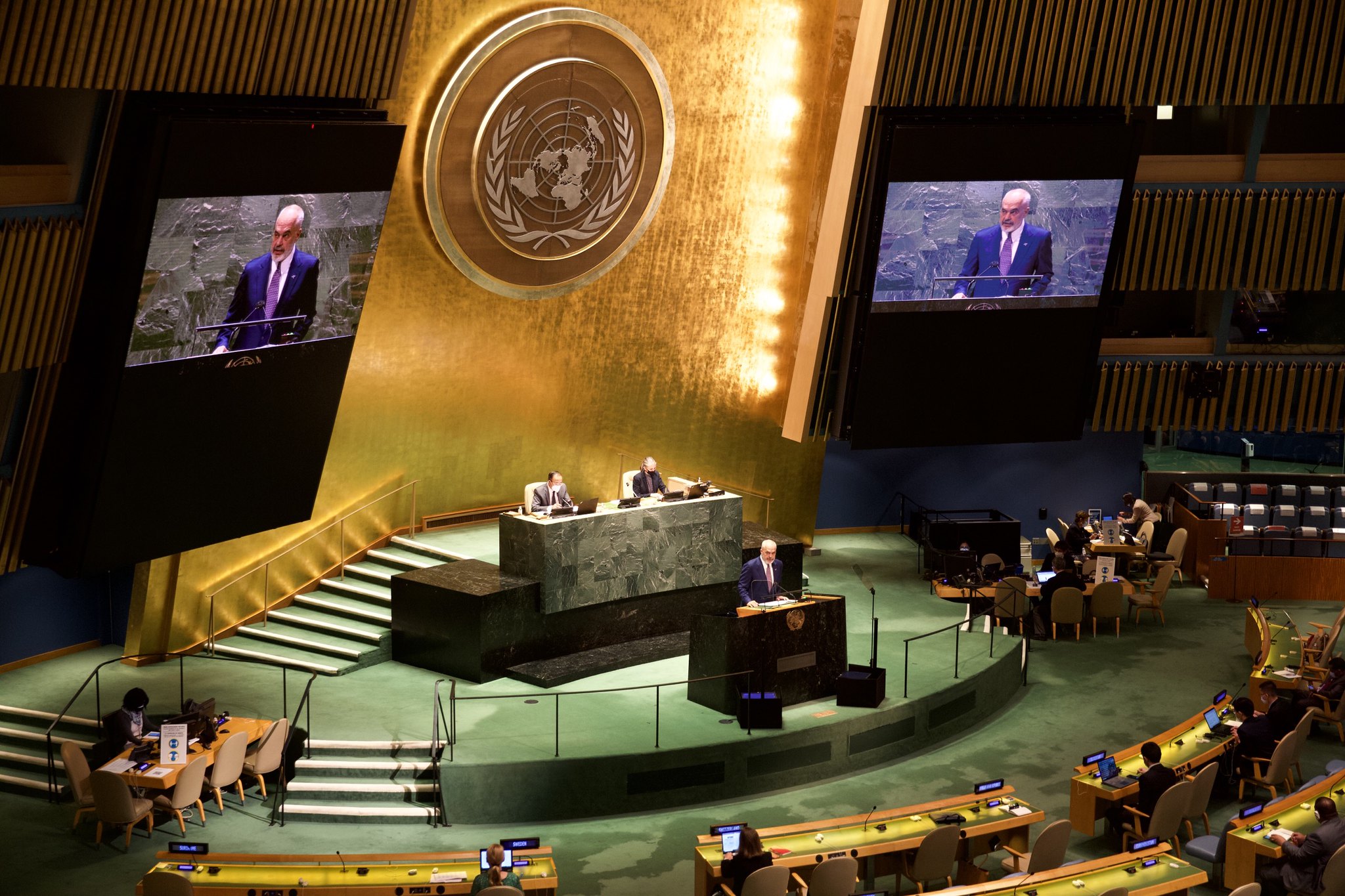 Mr. President of the General Assembly,

It is a special honour to hold this speech as the representative of a country that is, for the first time in its history, joining the Security Council of the United Nations, as a non-permanent member, for the term 2022-2023.

The significance of this event for a state that until not too long ago was considered one of the most isolated and repressive countries in the world, and the sense of responsibility with which we take up this role, cannot be overstated. I would like to start by thanking all UN members for their overwhelming support and their trust.

Albania brings to the Security Council the perspective of a small but engaged country, aware of the burdens of the past and of the challenges of the future, that has experienced first-hand the limits of isolationism and has discovered the opportunities of multilateral cooperation.

Albania is now a country characterised by respect for differences, tolerance of different religions, and appreciation of the contribution that every culture brings.

It will sit in the Security Council with a clear agenda of priorities, which reflect what modern Albania stands for: the promotion of peace and security, peaceful conflict resolution and mediation; the respect for the rule of law and human rights for all ; increased participation of women and youth in decision-making; universal adherence and full implementation of all non-proliferation and disarmament treaties and conventions; concrete and continued active commitment to the fight against international terrorism, and violent extremism.

It is a special pleasure to return, physically, in this Great House of Peace, and be able to share our thoughts on today’s world, including my country’s effort in facing one of the biggest shared challenges, the ongoing Covid-19 pandemic, which, for more that 18 months, has inflicted terrible pain everywhere. Like every other corner of the world, Albania has suffered from this devastating scourge.

To this day, more than half of the Albanian population is vaccinated and we expect to have the whole recommended population fully vaccinated during the next 10 months. One of the big lessons of this tragedy is that no country can face it alone; and we know now, no one will be safe until everyone is. As we have seen far too often, without cooperation, solidarity and joint actions, the price we pay, individually and collectively, will only be higher. This is why at the height of the Covid crisis last year, dozens of Albanian doctors and nurses went to Italy to help their colleagues in the Lombardy region; in return, we have been fortunate and grateful to welcome Italian doctors’ assistance in the same fight home.

I owe here a heartfelt thank you to many that have been there for helping us; to the Republic of Turkey that made possible for us in really difficult moments the necessary doses to start massive vaccination; to the European Union Commission that fought hard to speed up the provision of vaccines from EU to Albania and the Western Balkans, and also to the governments of Italy, Greece, Croatia, Latvia which were there for us with their vaccine donations and to the governments of Poland, Austria and Denmark, which have pledged to help us in the way.

I brought here these examples to not forget that we will be able to prevail in this war for life only through a common approach based on deeper solidarity, continued assistance, and uninterrupted cooperation. The sharp inequality to vaccine access – the only way to stop the virus – has once more highlighted the urgency for a different approach, for global initiative, inclusiveness, solidarity and fairness, as well as trust to science.

This is why we continue to advocate international cooperation and support the proposal for a new international treaty for pandemic preparedness and response. We must be and stay together, resist any temptation of isolationism and nationalism. It is necessary to urgently improve vaccine access for all, as unvaccinated people carry the high risk of enabling the emergence of more dangerous and deadly variants that could reverse the gains so painfully made, and expose us all to even more dire consequences.

If the 75 years long and strong experience of the UN has taught us anything, it is that challenges to peace, development, justice, health and security need the contribution of all, rich and poor, big and small.

We firmly believe that, 75 years after its founding, the United Nations remain the cornerstone of the multilateral rule-based world order. With dialogue and concerted efforts through the entire UN System, humanity has made remarkable gains in peace, security and development, in the respect of human rights and human dignity; in empowering women and motivating youth, in helping hundreds of millions of people leave poverty behind. We must continue to build on these achievements. The people, our fellow citizens, are right to ask for more, for better and faster initiatives, and we must be up to the task.

Let’s remind ourselves that our future, the future of humanity, is shaped by the way we respond and cooperate in the present. Multilateralism is challenged when selfish nationalism prevails. This is one of the most important lessons of the past.

Multilateralism can be slow, sometimes frustrating and it does not always produce quick results. But a world without shared rules, obligations and multilateral institutions, is a nightmare we know all too well.

Therefore, we cannot afford to lose faith in a multilateral system. We must work to reform it; not to undermine it and certainly not abandon it.

We share UN Secretary General’s concerns in his report on “Our Common Agenda”, and we think that all UN member states have the responsibility to contribute to increasing the functionality of multilateral institutions and mechanisms in order to make a tangible difference to people’s lives.  It is exactly in this spirit that Albania successfully chaired the OSCE in 2020, as part of its continued engagement and efforts to strengthen peace, human rights, cooperation and equality in the OSCE area.

Climate Change is another key priority in our national agenda. We do not need to have repeated extreme weather events, catastrophic flooding and unbearable heat waves, to understand that the continued loss of biodiversity and the unsustainable use and degradation of ecosystems are causing profound and adverse consequences to millions of people and are threatening peace and security.

Convinced of the urgency to curb greenhouse gas emissions in line with Paris agreement and the 2030 Agenda, as of July 2019, the Government of Albania is the first country in the region with an endorsed Strategy on Climate Change and related Action Plans, with policy objectives and concrete actions to reduce greenhouse emissions. A special law on “Climate Change” has been adopted in December 2020.

Albania as a net clean energy producer is also actively engaged in doing its part to reduce greenhouse gas emissions by 45% in the next decade, and to achieve net zero emissions by 2050.

The European integration process represents an anchor for Albania’s future and we look forward to the first Intergovernmental Conference in accordance with the previous decision of the EU Council to open accession negotiations with Albania. I have said in Tirana, in Brussels and everywhere, and I want to repeat it here:

Albania has been ready for a while. It is waiting for the EU will do its part.

EU integration is a national priority goal; it is a region-wide aspiration and a source of inspiration. In a completely transformed regional context, all six Western Balkan countries have agreed to enhance economic cooperation by developing a Common Regional Market, based on EU rules and standards. We have entered a new and ambitious phase of co-operation and are also working to concretely implement the 4 EU fundamental freedoms: freedom of movement of people, goods, services and capital through the “Open Balkans” initiative.

It is the mark and proof of our regional ownership, convinced that it will generate economic growth, reduce unemployment, increase trade, investment, and employment in the Western Balkan and, last but not least, make peace irreversible and help the resolution of conflicts once and for all.

The history of the United Nations is one of uninterrupted enlargement. It started with 50 members in San Francisco and we are now 193. But still, this large Assembly is not and will not be complete without one of the states in our region, the Republic of Kosovo! You have heard me more than once here call for the recognition of the independence of Kosovo. It is not an obsession, nor do I mention it just to pay lip service to the cause. It is an invitation to acknowledge the new realities in the heart of Europe, through the Balkan region where a new state was born with the help of an international community committed to the cause of freedom, human rights and self-determination. But that work needs to be finished. I want to reiterate this call and do so because reality has shown, to us, to the Kosovars, to the Serbs, to all Balkan people, to the Europeans and to everyone anywhere who wants to see it, that an independent and sovereign Kosovo – a reality already 13-years-strong – has brought more peace and stability in the region, has contributed to move ahead from the bitter past, and is undeniably part of the common future of the Western Balkans.  Albania supports as the only alternative the dialogue between Kosovo and Serbia, which should lead to mutual recognition between two States, two neighbours. Every day without such an agreement is a day lost, a day stolen to the youth in both countries, a day taken off the common future. I say it in a friendly way but with absolute conviction: only wisdom, courage and vision will finally liberate Serbia from the burden of its past.

Before concluding, let me say a few words on Afghanistan.  It is our duty to do whatever possible not to abandon the Afghan people, who find themselves once more in the cross-roads; to preserve the undeniable achievements of the last two decades, prevent and resist any return to the age of darkness the world has seen before.

As the dramatic events were unfolding in front of our eyes, we could not stand idle. Despite limited capacities for receiving immigrants, but with unconditioned humanitarianism we opened our doors to Afghan refugees. We did it just as we have done in other critical moments of our history, when we saved thousands of Jews during the Holocaust and Albania became the only country in Europe to have more Jews after then before the war, or when we welcomed half a million of our Kosovo brothers and sisters escaping the hell of ethnic cleansing in 1999.

We welcomed Afghan refugees because we have a moral duty to be in solidarity with those in danger, we owe it to our own history as refugees until thirty years ago and also we owe it to our children that should learn not just by words but also by deeds that in this life there is a time to get and there is a time to give.  As the Nobel Peace Prize Laureate, the Albanian Saint Mother Teresa once said: “Even when you cannot do great things, do small things every day, but with great love.”

We are humbly doing our part.