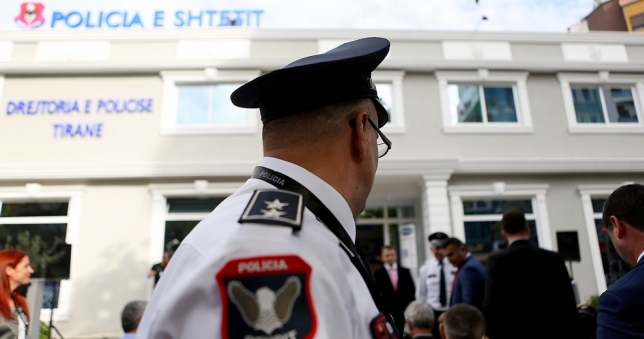 Certainly we have done many things throughout this period, but what still remains to be done, because it takes time and requires also a totally new approach, is the radical improvement of the quality of service to citizens.

We are very aware that, although citizens can see and feel in many aspects the change we are bringing, as far as quality of services is concerned, we are far not only from what people aspire, but also from our ambition for the state.

Today, it is really important to emphasize that we are not making a routine inauguration and neither are we inaugurating the change of a building facade, even though I believe that at least at this point there are no objections that as far as facades are concerned, no one can equal us. The opposition does totally agree on this as well, as they think that they say something we don’t like, but we like very much improving the appearance of things because, in the end, the difference consists on how we understand the idiom “You can’t tell a book from its cover”. But the cover is important, especially when it comes to the state, when it comes to state servants, when it comes to the State Police.

There is not the slightest doubt that in this respect, we are very skilful.

I have the chance to be very close to this place every day, since I live nearby, 50 metres apart from this building, and I continually saw people who would gather together in a loophole and the main police department, the police department of the capital city, would look really miserable.

But what is more important than the physical transformation of the building, is the transformation of services within, since from a degraded service provided with neglect, citizens will have a 24/24 service. In addition, services will be provided by a one-stop-shop, which means that they will not have any more to address to several counters, as they used to do until yesterday because the counter of the Tirana Department couldn’t deal with everything. From now on procedures will be carried out here, in the one-stop-shop.

Starting from now, services will be provided in a totally transparent way and citizens will not stand in front of a regular employee who might delay procedures or ask to be paid. Instead, citizens will have in front of them a transparent structure which receives their application, issues them copy of application and, according to the procedure which is carried out online, schedules timelines. If the citizen does not receive an answer on the scheduled timeline, the respective office and employee will be hold directly accountable. The unique case number is issued so that the office can legally track every reported case, differently from what used to happen until yesterday.

All these are a very good reason for us to feel relieved from the burden that we have been carrying throughout this period, of not being able to provide a decent service in this important centre of the State Police.

We feel relieved today, because we are drastically eliminating bureaucracy and considerably sparing citizens’ time. But what is more important is that, not only are we improving the quality of service to citizens, but we are also considerably improving the quality of work of the State Police in tracking reports made by citizens. We must keep in mind that we deal with 75 different kinds of services, not just with one type of service. We deal with an extraordinary number of citizens, which becomes larger if we consider the number of those who, thanks to this quality service, will be confident that their efforts will not be in vain, their report will not be refused and that, in order to receive what they are entitled to, they will no longer have to pay anything.

So, this is a very beautiful moment. This is a moment to heartily congratulate the Minister of Interior who has followed this project step by step, as a fundamental project for the further transformation of the entire service system of the State Police. This is the moment to thank the General Director of the State Police, the Director of the Tirana Police Department who, without any doubt, have covered a very large workload in difficult conditions, without having this structure, during the period of reconstruction. Certainly, this is the moment to thank all those entrepreneurs who have contributed so that this transformation was done without spending a penny of the state budget.

In the end, I would like to say that this is only the beginning!

This is only the beginning, because our project for transforming services is much bigger than this, much more ambitious and it goes beyond the services of the State Police. Having as its centre of gravity the Ministry of Interior and as point of support the State Police, this project aims of course to include in a one-stop-shop all counters to which citizens address, absolutely all of them, not only police counters. This will enable citizens to get any services they need, from mortgage to pensions, from police services to other services, in a one-stop-shop. Additionally, services will be delivered electronically. We are working on this project which will take its time, but there is no doubt that citizens will start to see very important changes in this respect. They will be increasingly relieved from the terrible burden of bureaucracy, wanderings, delays and bribes.

The territory on which the facility of the former Guard of the Republic is build, will be transformed into the territory where the Ministry of Interior and the State Police will deliver services whose quality is, without any doubt, among the best qualities in the region, but also one of the best qualities in Europe. This is our ambition! We are working on this project, and I remain faithful that we will still be together to see the outcomes, but obviously, it will take time.

One again, many thanks to everyone!

Thanks also to all those who are standing here and listening to us. I believe it is time to look closely and within this transformation. We enjoyed the facade, which without any doubt is much more beautiful than the one before, because as I said it, no one can equal us on facades, but there is no doubt that even behind facades, we are the best!

The launch of the One-stop-shop standardizes the relationship of the citizen with the State Police. Communication of citizens in these offices, which will provide uninterrupted 24/24 service, will be made through electronic registration of claims, complaints or reports. After filing the application, the citizen is given a unique case number. The documentation that accompanies the application is transmitted electronically in real time to the office where decision on the application will be taken. The unique number enables citizens to follow progress of the case, at any moment.

The first office of this kind was promoted in the presence of Prime Minister Edi Rama, at the Police Department of Tirana. It will be followed by other offices in every department and police station throughout the country.

Minister of Interior Saimir Tahiri said that the launch of the first One-stop-shop for all police services establishes a new relation between citizens and the State Police. “Similar offices, – Minister Tahiri said- will be launched in every department and police station throughout Albania, to restore in the State Police the culture of service to citizens, to restore citizens’ trust, to fight corruption and to build the modern police we all expect.”