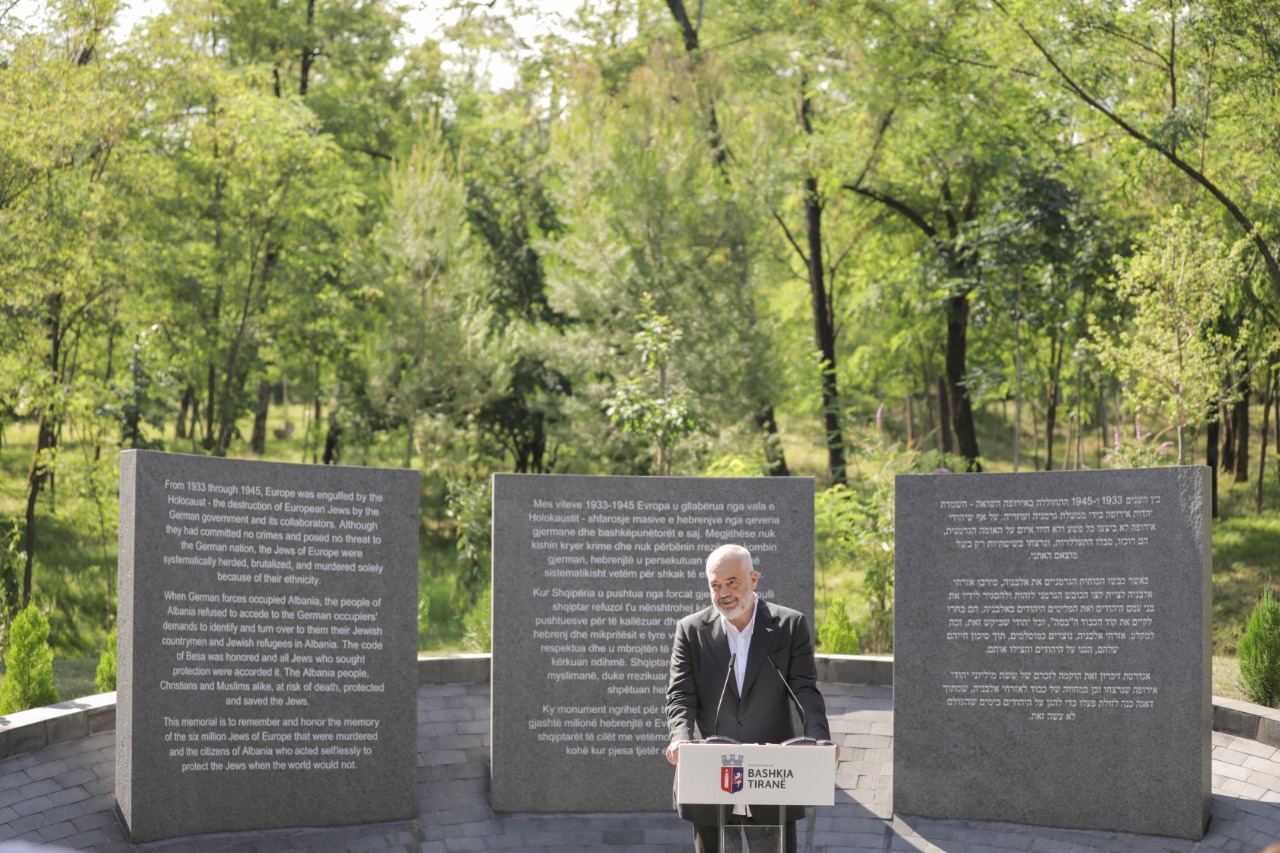 It is a great and personal pleasure for me to attend fulfilment of a tangible evidence of perhaps the brightest page in history of Albanian hospitality and word of honour, a project we have been considering and designing since in the days in office as Mayor of Tirana.

I am so pleased today that this Memorial has completed and it is today part of a beautiful public space, where tens, thousands of families, grandparents, grandchildren, young couples pushing baby carriages walk along during the month and they would be able to tell their children the meaning of the words engraved on these three stone slabs, not fortuitously written in three languages; Hebrew , Albanian and the language of those who, with the force of great power in search of a better world, made possible the liberation of the whole world, together with their allies, from the great Nazi curse.

The history of coming to the rescue of Jews in Albania is an amazing story, yet it is not the beginning of the history of a really pretty strange relationship between Albanians and Jews and the Jewish people and Albania, which dates back to the second century AD, when for the first time the Jews descended on the shores of the Adriatic and then in the 15th-18th centuries, they reappeared to settle at various locations. But I do not want to talk at length about this part, which I brought to attention just to share with you an aspect of this mystery that has yet to explored and better understood to the last part.

Second, what I believe is worth recalling is that before World War II, before this relationship was to come to light in the most noble and impressive form, the protection and salvation of Jewish lives, Albania was the only country to include recognition of Sabbath in its national legislation. It meant that all the citizens who lived in this country and belonged to the Jewish people had the right not to work on Friday just as no one had the right to deprive them of their holiday pay for this.

Without further ado about many episodes of history in the run up to the stunning chapter of this relationship during World War II, deeply confidently I would like to say that after the multiple episodes, characters, epic moments defined by the righteous people’s efforts in the history of Albania, it is a stain in the consciousness of Hollywood that has produced some masterpieces about this era, but for sure would have produced many more if it had referred to the episodes of how the Jews were defended and saved in Albania. These are the most amazing realities, from the horseback ride of a family that transported and brought to safety 17 Jews in 24 hours, the Biçaku family, immediately after the capitulation of fascist Italy and the occupation by Nazi Germany; or Myrto family in Kavaja town that stood loyal to the Jewish friend they were protecting even by sacrificing one of the family members, the host’s brother, who was taken to the Mauthausen concentration camp to never come back from there. So, the brother’s life was sacrificed just to protect and save a brother by God, the only relation with whom was that both were created as men; or the family Nuro Hoxha, another extremely amazing story, that provided shelter to four Jewish families, one of which has testified that as soon as the door was opened to them they hear the family head making an incredible statement, but later confirmed by reality of protection and salvation, “stay calm, nothing bad will happen. From today on, we are a family and my son and I will defend you with our lives.”

It is the only country, Albania, with a larger Jewish population at the end of WWII than at the beginning, just like it is the only land from where Jews didn’t flee, but they came to seek protection and salvation and it remains extraordinary for the very history of the Albanian clergy. Here I see all the esteemed representatives of the Albanian clergy, whose highest authorities were summoned to Berlin, at the time of a vacuum, where they were seen as the party the invaders could communicate and negotiate with.

They were asked two things; the right to gold in Albania deposited in Italy and the list of Jews sheltered in Albania.

All the highest representatives of the clergy at that time, Christians and Muslims, gave an answer that I believe is one of the golden words of this country’s history and the history of the clergy: “Yes, we will give you the gold, but not the Jews!”

The rescue of the Jews is a story, which contains an obligation for us all to preserve it not just as a story told on the ceremonial occasions or marked days, nor as a part of our history as Albanians, but as a great value that must be passed down from generation to generation with utmost dedication, because within it there are many facets, like the sides of a gem that sparkles creating different glitters and colors no matter how you roll it.

In his recommendation letter for an Albanian host, hospitable and saviour, the Jewish photographer Gavra Mandil wrote as following: “Albanians may not have been actually educated on the heritage of Goethe and Schiller, but they attached the greatest importance to human life, in a most natural and understandable way and without asking anything in return.”

The rescue of Jews during Holocaust is a major monument to the living history of ordinary people in this country and a great monument to a precious pedestal, the pedestal of religious coexistence, without seeing the other’s religion as a reason to divide, but looking at the other primarily the man with whom life binds you, fate binds you, and the great obligation of the value of life binds you.

I read here: “Whoever saves one life, saves the world entire.”

It is the common phrase found on the Torah, the Bible and the Quran, referring precisely to this fundamental concept that is fantastically embodied in the following quote by Mother Teresa: “light a candle rather than curse the darkness!”

Of course, all these episodes and all the Jews who were rescued in Albania did not prevent the Nazi darkness from committing atrocities, yet they are candles lit by ordinary people, who did what they could and taught history the lesson that if everyone would have been doing the same, that darkness would not have been able to rule the world and wreak havoc on an entire nation and people.

I would conclude by quoting Torah passage: “Be careful, do not forget the things that your eyes saw! Don’t let them fade from your memory as long as you live. Teach them to your children and grandchildren!”

This is a place that brings us together today and will attract people of this country in the future to help them see through and beyond these letters what others went through and saw for themselves and what in no way we should not allow get out of the heart of this nation, of this people, of this country.