Prime Minister’s message to all Albanians 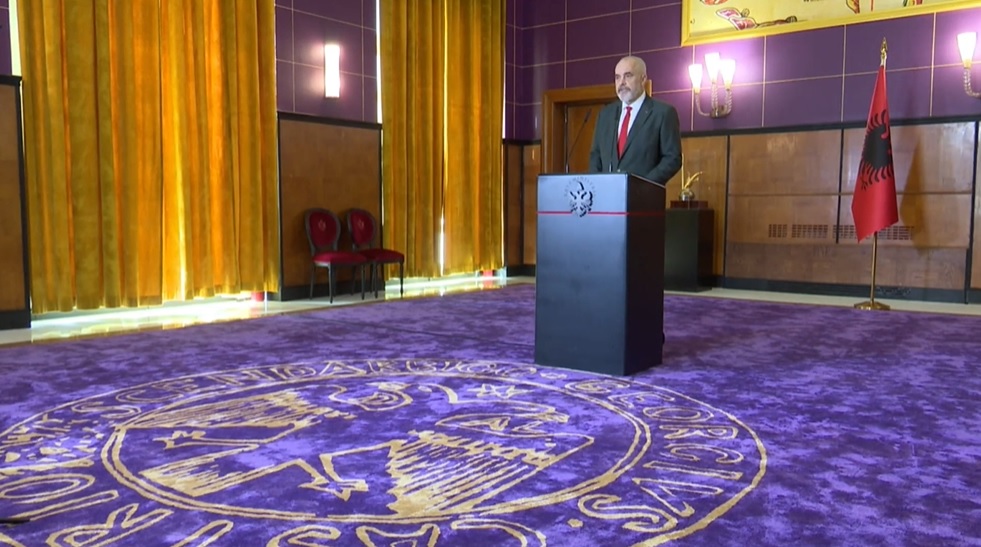 The shock wave of another natural disaster, this time coupled with geopolitical factors and trade manoeuvres, is heading towards Albania again.

It is neither an earthquake, nor a virus, nor is a flood and, thanks God, it is not life-threatening, yet, in socio-economic terms it has a negative energy that can trigger shocking effects on the lives of households, businesses and the society.

This is the unprecedented energy crisis, which has just begun to show its extremely disturbing signs in the major world markets, from China and South Korea, to America, to Great Britain and to the space of the European Union and to neighbouring countries, such as Italy and Greece.

The temperature of this crisis is soaring everywhere, now on an hour to hour basis not day to day, while the dropping weather temperatures are approaching along with winter and the growing need for heating.

Just when the hopes of a return to normalcy, after the tragedy caused by the pandemic, to which mankind is paying the cost of fatalities comparable to a world war, have risen thanks to the mass vaccine rollout and high rates of economic recovery, this new crisis forces us to take certain steps in the face of a new challenge, which is as strong as the earthquake and the pandemic in economic and social terms.

The phenomenon of mind-boggling gas and carbon soaring prices in all international markets, as well as the strong upward trend in oil prices, coupled with a general spike in prices of daily consumer goods, looms large today over all countries like the silhouettes of an enemy army on the horizon of a challenging winter the world is about to face.

The exponential growth in consumer demand, after the reopening of economy due to successful management of pandemics, has exponentially spurred the demand of manufacturing industries for energy, challenging even the world’s economic powers, from China, where the tight energy supplies threaten nearly half of the country’s industrial capacity, to Europe, where the high demand and insufficient gas supply have forced governments to cope with soaring prices and even warn and hint at electricity supply cuts.

The high rates of post-pandemic recovery and the exceptionally high growing need for energy have driven the price of gas up by about 250%, that of carbon by about 80%, while the price of oil has jumped up from about $60 per barrel in August 2021 to around $80 right now and, according to current projections, the price could skyrocket well over $100 per barrel by the end of the year.

At HUPX Power Exchange, the electricity was traded at an average of 39 euros/MWh last year, while the electricity price has jumped to 110 euros / MWh this year, registering an increase of 182%.

For many financial research analysts, this energy crisis is different from others. It is mainly related to climate change and efforts to curb it, but also to a combination of other factors.

A series of extreme weather events, with unusual seasonal features, have impacted both gas supply and demand. The extremely cold winter at the beginning of the year in the northern hemisphere, Asia, or the extreme freezing temperatures in the United States, contributed to the drastic fall in liquefied gas exports during February.

The cold spring and floods in Europe automatically increased the demand for gas for heating.

Similarly, the extreme summer heat waves in China, Europe and the US drove up the demand for gas for cooling.

Electricity generation from alternative sources has decreased, while wind farms in Europe have produced less energy than their average annual levels.

Consequently, the shortage of alternative energy output has led to an increasing demand and soaring prices of gas and coal.

Phasing-out three nuclear power plants as part of the program to stop the production of nuclear energy in Germany has driven a growing demand for energy from non-renewable natural resources.

The post-pandemic economic recovery has been strong both in Europe and Asia, increasing the demand for energy from household consumers, plants and enterprises in general.

Despite the souring demand and the 250% rise in base prices in the markets, Russia has not increased its supply to the European Union, restricting itself only to meeting long-term contractual obligations.

Around 15 million households in Great Britain are expected to be negatively affected by the electricity price increase.

The Italian government has notified its citizens for a 40% increase in their gas and electricity bills in the next months.

Likewise, electricity price rose 72% to 133 euros/MW hour since start of the year in Bulgaria.

This whole picture on the energy situation, naming only a few of the many examples that can be found far or very close to us geographically, suffices to create an overall idea about ​​this crisis, where like it or not, Albania like all other countries, is involved and forced to cope with it, totally unable to shun this global storm.

Experts find that in spite of the potential systemic implications that the extraordinary energy crisis could trigger on all countries, the final battle will take place and be decided by the end of the first half of next year.

The responsibility and main duty of the Albanian government is to protect at all costs and as much as possible the vulnerable social categories, household consumers, as well as small business from the impact of this new disaster.

I now believe that all of you, dear fellow citizens, have witnessed that we neither fall nor give up in the face of any force majeure.

Be fully confident, just as I have unwavering confidence, that just like we handled the impact of devastating earthquake and pandemic, so will we overcome this challenge posed by energy crisis, and rest assured that just like the ruins of earthquake couldn’t succumb and overwhelm us and just like the attack of the “invisible enemy” did not catch us off guard, neither will this unprecedented energy crisis find us unprepared.

Unfortunately and regardless of our desire or will, the past years have been like the saying has it: “from war to war.” Yet, just like we emerged stronger from the earthquake, and a just like we are emerging stronger from the pandemic, as the new kindergartens, schools, homes, new residential neighbourhoods under reconstruction are showing, as the highest economic recovery rates in the region are signalling after the dramatic closure of the economy, so we will emerge from this new natural disaster combined with factors geopolitics and trade manoeuvres that do not depend on us.

No fear of whatsoever, no uncertainty, but determination, patience and confidence only, because the best will be done and Albania will continue to aim high to reach the target we have set for ourselves together along this challenging journey of this new decade we have just entered in.