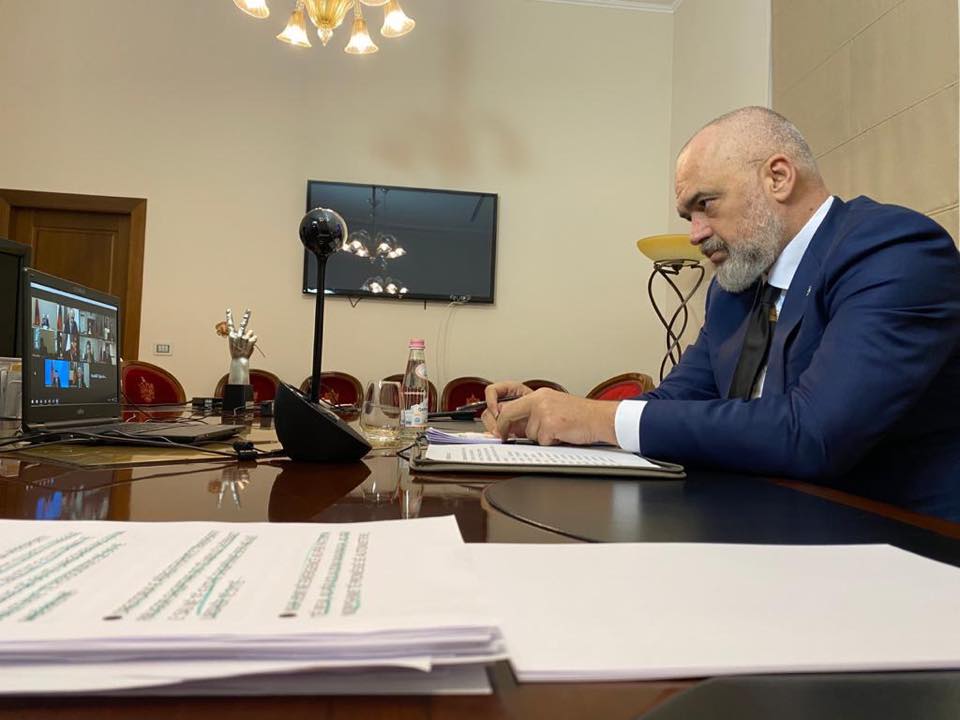 Dear friends, I wish you are all calm and self-mobilized in this war, where unlike any conventional war, we don’t need to go to any frontline, but we ourselves are the front of the war; a war where we shouldn’t protect our homeland from an enemy invasion, but our body and our family members’ body cells from an enemy invasion; a war we don’t need to use weapons, but be armed to the teeth, radically limiting our freedom.

We are at war with an enemy that is seeking hostages among the old, ailing and chronically ill people and his only great ally is our carelessness and negligence, while other allies include fear, insecurity and confusion fuelled by the sources of our information.

No war is won without information and any battle or even debate, let alone war, can be lost if you are uninformed or misinformed. And when it comes to this enemy, any information other than the information coming from or confirmed by official sources is dangerous, so it must be seen through the protective mask of utter suspicion. It would be best if such information is ignored and instead everyone watches sports or movies rather than televised debates and listens to state information and expert explanations, instead of attaching attention to comments on all sorts of TV channels and news websites.

Let’s stick it in our mind and blindly follow the practical advice in this war situation, frequent hand washing, keep house windows wide open, avoid leaving home if not necessary, 14- day self-quarantining if arriving from an affected area, or if a family member has contracted the virus, keep children at home and prevent older people from leaving home …

And let’s also learn some simple things: This uncommon flu cannot be prevented from going everywhere, just like any common flu. But unlike any common flu that is fought easily and ends without inflicting a national or a world trauma, this flu is fought with austerity measures that escalate to drastic actions, similar to actions to protect the civilian population from military aggression or bombardment campaigns.

Many, for example, could mistakenly think that if the country’s borders were shut down since the virus emerged in China or Italy, Albania would have been spared. But no, because if this were true, the plague in the Middle Ages, when no air transport existed, when the road transport was carried by carriages, would have not conquered the continent and would not claimed millions of lives. So, closing borders does not prevent an outbreak, including coronavrus, but it just slows down the virus. It should be done, neither ahead, nor later, but right after the outbreak of the virus in the territory and it should complemented with step by step implementation of the action plan over the territory.

Why slowing down the spread of the outbreak is vital to this war success and what do we call success in this war?!

First of all, we should clearly stick in our mind this is an uncommon flu and it will spread and affect many of us just like a common seasonal flu. But around 80 percent of those infected with coronavirus will never fall ill at all and will never know that they had contracted the virus, because they will show no symptoms at all. So, they will kill the coronavirus, just like any other virus is killed by a healthy body that itself produces the virus’s own lethal weapon.

Second, just 20 percent of the infected people will show various symptoms, but that too is very important since 80 percent of them will experience it like a common seasonal influenza with a little body temperature and some flu conditions by staying at home.

That’s why their isolation inside and keeping the elderly away is highly advisable, but no in-patient hospitalization is provided neither in China, nor in the United States or elsewhere around the world.

Third, only 20 percent of those testing positive for the virus show disturbing symptoms and the vast majority of them are over the age of 60, or chronically ill, and people with underlying health conditions, including heart, high blood tension, lung disease, and it is only them who really need an in-patient hospital regime, except only the first few cases that although not showing serious symptoms they are still kept in hospital and their conditions are closely monitored for a range of reasons.

Slowing down the spread of the virus by resorting to the austerity measures provides at least two great advantages in this war:

First, it lessens the likelihood that the number of those in need of hospitalization will be greater than the country’s hospital capacity, which also led to the collapse of the Lombardy health system, known as one of the world’s most exigent health systems.

Secondly it bus time to the world science to find an effective treatment and cure, possibly the coronavirus vaccine, yet slowing down the virus’ spread could help a country like Albania to buy some more time while warming spring temperatures near as it is universally known that high temperatures weaken and slow the virus spread and it is largely believed temperatures will similarly affect the coronavirus.

Plainly and straightforwardly said, taking it easy and by saying it will end soon and we are going on with our lives, this would lead us with both feet to a national catastrophe, while by making up our mind that this war is not won otherwise, takes us vigilantly and arms us with all possible weapons in war, escalating hard to extreme measures.

Therefore today we have taken a number of new measures according to our strategic plan and apologizing first for the incredible limitations on your daily lives that come with such measures, if you live in Tirana and Durres in particular, please humbly understand and abide by them!

A apologize 1000 times everyone, but this war cannot be won otherwise.

From Friday at 06.00 am to Sunday midnight the perimeter of Tirana-Durres districts will be closed and no private and interurban transport vehicles will be allowed on the roads between Tirana and Durres or to and fro Tirana and Durres and other regions of the country.

From Friday 6am to Sunday midnight the private cars and urban transport vehicles will not be allowed on the roads to Shkodra, Lezha, Elbasan, Lushnja, Fier and Vlora.

The traffic will remain open only to ambulances, vehicles carrying out public service functions and those transporting goods.

These extreme measures limiting the freedom of movement are a must in our efforts to protect every citizen, every family and whole society from the aggressive escalation of the coronavirus attack on us personally, on our relatives and friends.

I repeat, this is a “flu” that will affect many of us! 80% of those contracting the virus recover without showing any symptom. This means that each and every one of us may have contracted it, even though showing no symptoms, and therefore it is up to every one of us to protect the elderly, ailing family members, relatives and friends.

Always remind that only a small number of those showing severe symptoms need to be hospitalized, while the majority of coronavirus infected people experience it like the common cold and flu and the majority of those who end in hospital still recover. However, none of us can and should bet with the extremely low probability that he / she or his / her relative will be among those who may even lose their lives! No way. Never!

I am confident and be all confident that although we are unable to kill this invisible enemy around us in search of hostages in our homes, still we can do everything and as much as we can to make this enemy weary and then ultimately defeat it by helping each other and with the God’s help and with the increasing warmer air temperatures.

Nothing else is needed and nothing helps us but the rapid awareness, the drastic restriction of daily movements, the observance of the advice of the health authorities and national solidarity.

The production and manufacturing enterprises operating in food industry, pharmacies, freight transport or food or pharmaceutical supply services within the Tirana-Durres perimeter must accredit their employees’ transport vehicles as well as the employees themselves, name by name, to the General Directorate of the State Police.

The public administration employees will have a day off tomorrow.

In order for them to perform their state or public duties within the Tirana-Durres perimeter during ‘the curfew” period, the international airport employees, or other state institutions who perform essential functions and it is impossible for them to go to work on foot must to be accredited with the Directorate General of State Police.

Carrying family members or other individuals in the work vehicle, who have nothing to do with the public or state duties, is s strictly prohibited and will be punishable by severe sanctions.

The Albanian Directorate General of Road Transport will suspend its services throughout Albania until a further notice.

There is not an emergency, neither for new driving licenses, nor the vehicles inspections, or the car ownership transfer, but we are at war to defend ourselves, defend each other and whole Albania from an invisible enemy.

All Road Transport Directorate-related procedures are suspended and the count of their expiration days will resume on the day the service reopens.

To carry out their information duties during “the curfew” within the Tirana-Durres perimeter, TV channels should accredit cars of their TV crews to the General Directorate of State Police in Tirana.

Concluding, I would like to emphasize that these are extreme measures designed to cope with this challenge at this stage and stem the enemy’s outbreak and spread to the territory and our bodies will indeed be followed by other extreme measures, but I want to point out that a series of inspection actions have been carried out in a number of garment factories and call centres, which will close just like everything else tomorrow and will stay closed until end of this deadline, but they are required to comply with all technical safety distances and all safety elements for each employee.

When these enterprises resume activity fail to meet all obligations to protect employees, their families and close contacts, they not only will be shut down, but they will also cover any related cost, because in such case it is just their negligence and not the elements to be blamed for the suspension of the activities, at least as this stage of the plan to repel this threatening enemy, which we will be able to defeat only by being united and not divided in parties and by seeing no division between the citizen and the state.

Only by having trust and confidence, discipline and only discipline and patience we will succeed and this is not merely a sentence in  the end of this regular message extended to the people, but this is my profound conviction that I am deeply sincerely and strongly determined sharing with you, being just one of you as a citizen, parent, son of a mother and definitely part of a family I endlessly love and which I will do my utmost to protect myself and everyone else I would most like to embrace to give a hug today,  but I cannot because I do not want to be the cause to transmit the virus that can turn others into a too big a problem, or that through me others may be transmitting the virus to the elderly in our family turn into a very big problem.