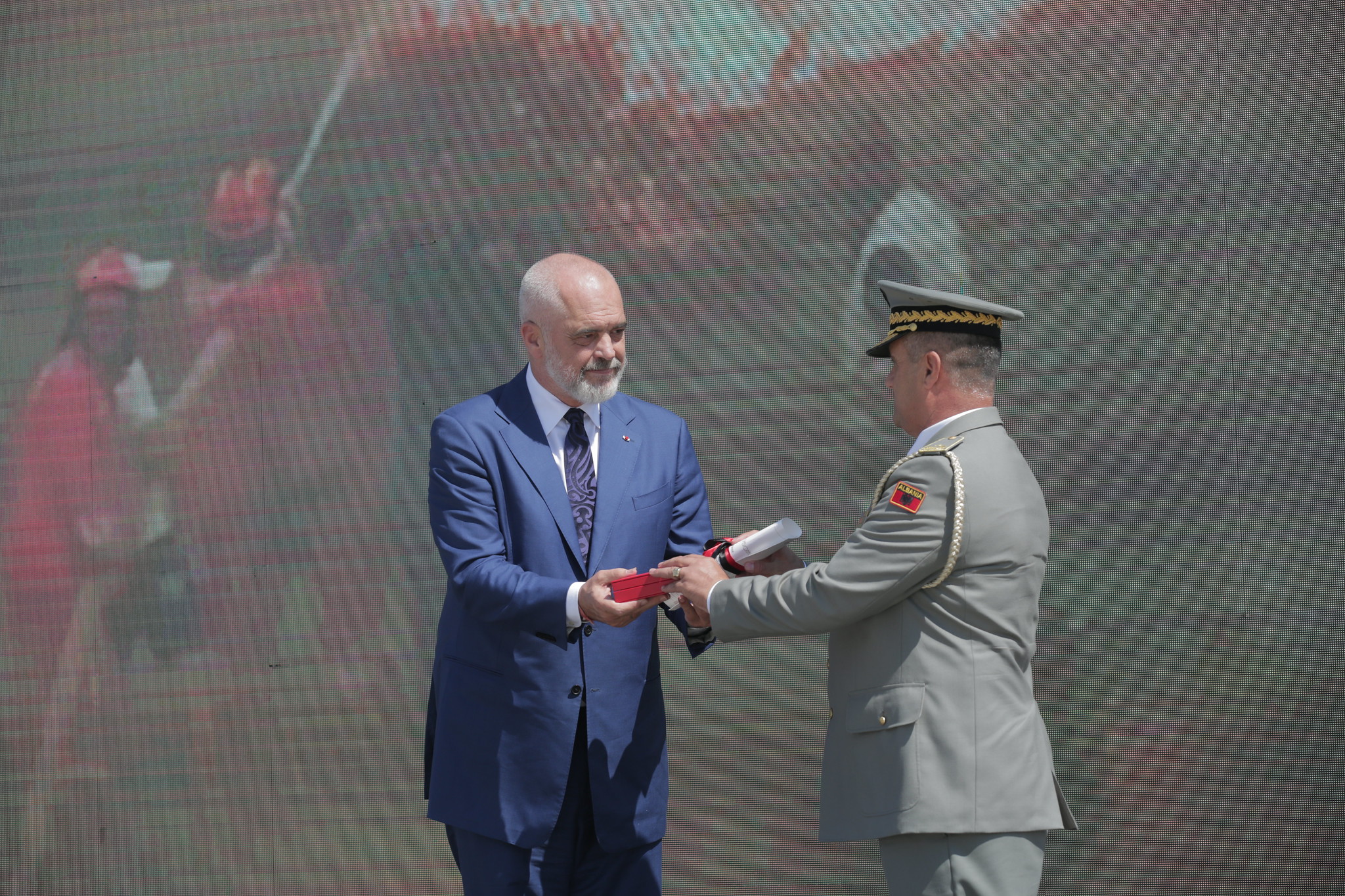 First of all, I want to publicly send my condolences to two guys who lost their parents in most recent fires.

At the same time, I would like to express all the gratitude and respect to each and every one of those who were involved during a month of fire, because as such was the month of August, and demonstrated high and strong sense of sacrifice and commitment. By this I mean every member and crews working in extremely difficult terrains, namely the Armed Forces, firefighters, the municipal crews and volunteers, crews of the administration of the protected zones, the forest service members, as well as the crews who supported all this effort through the National Emergency Service ambulances.

Worth highlighting today is on the one hand the incredible power of example of everyone and, on the other hand, the need to take the civil protection modernization forward, a process already underway and yielding its initial tangible results, but that should go on until complete.

I would convincingly underline that what we have already seen so far as a result of the whole Civil Emergency System reform is quite encouraging to see the final result of this process optimistically.

It was a month of wildfires, which, as everyone saw, engulfed whole world and, like never before, it seriously challenged poor countries that are used to the annual fire season that for the very first time were unable to provide no assistance of whatsoever to us. Not only that, but they needed help themselves. By this I mean Italy, Turkey and Greece.

This is one of the most significant examples of the importance of our relationship with the European Union and the importance of EU to our lives, not only in terms of standards, not simply in terms of democratic and institutional consolidation, but also in the aspects of everyday life and vital aspects that directly affect our lives and physically threaten us, namely the earthquakes, floods and fires.

This doesn’t mean Albania constitutes an exception and it is not a coincidence that the European Union has set up an internal mechanism to assist primarily its own family states when dealing with emergencies and no country can cope with the catastrophes and handle the natural disasters on its own. Of course, in our case, we face even bigger deficiencies that other countries in this continent. That’s why I would like to express a special appreciation and gratitude to both the EU Ambassador, who is attending this event, and the U.S. Ambassador.

I would like to state that this appreciation is neither formal, nor a diplomatic one and it is not even an appreciation for two ambassadors, for the sake of truth. It is actually an appreciation for the representatives of two major powers that are also our country’s strategic allies that are really here anytime Albania needs something and by this I mean the earthquakes, floods and forest fires and they are more than simply ambassadors. They are citizens of this country and people who worry about this country and they are instantly ready how to help us.

Therefore, beyond the hierarchy and the diplomatic and institutional relationship, I would like to thank both Luigi and Yuri, who is not attending this event today, but she is present through the Deputy Chief of Mission – the only one here not using the earphones, because he speaks Albanian and he understands us even when we believe to be speaking a language he doesn’t understand – for really being all-eyes-and-ears throughout August, being constantly attentive and constantly interested either to learn what happened during the day or how to help in the beginning of each day.

The presence of the ambassadors of the Netherlands and the Czech Republic is also a symbol of this spirit of solidarity of the European Union and the United States with Albania and Albanian people on these very difficult days. I would like to sincerely and cordially thank both of them for the decisive help they provided by making available a series of special vehicles that helped the firefighters and the army on the ground to put out a dizzying number of forest fires all over Albania.

I would also like to specifically thank the Interior Minister for honouring the Republic of Albania on this extremely challenging month, being all the time, day and night, with the firefighter crews in the country’s north and south. We have been contacting permanently and I am convinced his example has inspired other authorities. I am convinced this is the model we all should follow anytime we face such challenges test the people’s readiness and need for more energies and motivation than on normal days when seeing the authorities being with them.

Everything I highlighted have their role, but you and all those I already mentioned, each and every one of you here, the people in uniform have the main role to play as a single united force that succeeded in saving people’s lives and preventing completely potential catastrophic consequences of this scorching summer and this challenging August.

Of course, the prizes we are awarding today – and I have the honor to express my gratitude by conferring the Gold Medal for the professional conduct of the Land Force – are actually a symbolic token of appreciation for all of those being part of this Force. On the other hand, I would like to tell all crew members of the civil emergencies, starting with the members of the newly-established National Agency of Civil Protection, that in the meantime we will deliver on what is needed to increase your salaries, which of course will never be sufficient, because it is never sufficient when each and every member of these crews face life-threatening challenges, but nevertheless it is another motif, not only to take home more well-deserved income, but also feel respected for the work they do.

Of course, I can’t help but point out the criminal aspect of all these wildfire hotspots, the majority of which are a consequence of the dramatic increase in air temperatures around the world, but a considerable of them are also a result of barbarism committed by those who by using a match stick or a bottle of gasoline kill the soul of the homeland, inflict wounds on the body of the homeland and blow up the hardship, hard work, dedication and commitment of many, many generations, depriving the children of this country of green lungs.

I am very pleased that the State Police have had not only an intensive activity, but they also have yielded results, sending a considerable number of such barbarians behind the bars and such individuals don’t deserve to live free among the communities and the citizens of this country. They deserve to rot behind bars and I very much hope that the courts will deliver the right rulings. I very much hope that judges who will make such decisions will live up to the pain for so many destroyed natural wealth and for so many trees and life sources wiped out. This is a property that belongs to nobody individually, but they are a property belonging to everyone and they constitute a treasure we all are obliged to grow and pass on to our children and the judges’ children. As such, this is a ruling that the judges will make on behalf of their children. I hope they will do the right thing so that these barbaric criminals not only rot in prison, but also their cases serve to convey a clear message to all of those who could possibly seek to commit similar actions upon arrival of next summer, because it is intolerable that while the climate change and the increasing air temperatures themselves pose a growing threat for more forest fires and floods, there are people who commit such crimes and send all these parents, sons and daughters of the parents of this country face a mind-boggling challenge by setting fire that could cost even human lives.

Fortunately, many human lives have been rescued thanks to these troops. A tragedy like the one I already mentioned, with two parents being killed in wildfire, is a huge loss for their children and each of us, but thinking that the disaster could have been deadlier make the revolt and the need to punish the arsonists stronger.

One should not forget certain – not everyone unfortunately – but some local authorities, with Vlora Prefect one of those excelling most with his commitment and readiness, but not only. Today everyone should feel proud of what they have done.  Standing here in front of you, I am not just proud, but I also feel humble to the fact that the Minister, I and the government I head, the Parliament should do a lot more for all of you and make all the efforts to make available everything you need to best do your patriotic and even heroic work and of course feel increasingly better upon your return back home to your parents and kids.