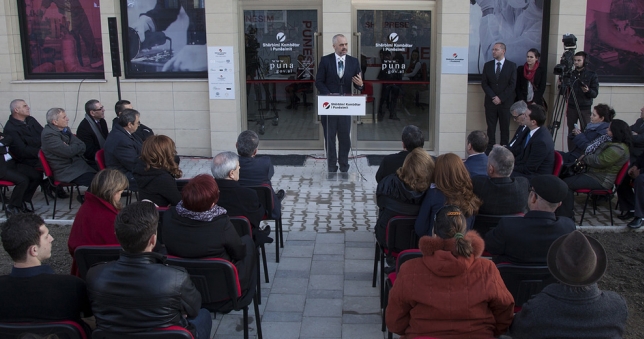 Actually, not for the sake of modesty but of the truth, the speed at which this new and modern employment office was established, as the embodiment of a new national employment service, is not to be credited to me or to the minister. Perhaps, the minister might take a few credits, but I take none at all, as this is entirely the product of an interaction that managed in such a short time to turn a forgotten space into a modern venue that delivers services to job-seeking citizens. This interaction involved the local authorities, private companies, business associations, which, in fact, are the main contributors to the establishment of this new employment office of international standards.

While I congratulate the minister and the staff of the national employment service for their dedication, and, above all, for the coordination of all these stakeholders, I would like to extend special thanks to the Business Albania association and its president, Mr. Bregasi, who supported passionately from the start this initiative to transform all the network of employment offices across Albania thoroughly. He did not only provide moral support that is very precious indeed, but involved other private sector components, in order to ensure a direct financial support that, as he said, allowed us to complete the process in an extremely short time, without having to resort to the ordinary procedural delays.

As a matter of fact, I would like to go all the way to the end with these congratulatory remarks and say that we have not simply opened an office, but have, instead, created a new gravity centre that is crucial to attracting the jobseeker and employer to one single place. I am convinced that, as the President of Business Albania declared, these offices are not simply useful to those who want to find employment, but also to those who have jobs to offer but cannot find people with the skills and competencies required for a certain vacancy. Thus, much needs to be done in this respect, because it demands a whole information process, as well as a process of education with this new employment mechanism that benefits both the employers and the employees mutually. Again, in this respect we will need the precious support of the organized business representations, the invaluable assistance of the local authorities, which will definitively give us an added value that is fundamental to making sure that the available vacancies are made public for all those seeking a job.

We have set the opening of the employment offices as a priority of this first period of our governance, not simply to create entirely different conditions to receive jobseekers, but mostly to accomplish what is their ultimate objective, that of finding a job.

Being that this is part of those priorities that set the framework for our first 300 days of governance, I take this opportunity to say that these employment offices are actually the crosscutting point for several our policies and priorities.

It is through such offices that the bigger cities of the country and also those cities that are centres of regions or districts are provided with modern interaction spaces that bring together the citizen, the business and the Government into a unique platform. In this way, business itself will naturally take on a new dimension as a social actor, in addition to being a player of development in the area of entrepreneurship.

The jobseeker will not only have the opportunity to seek the right employment and find it once his/her skills match the requirements of the employer, but will also benefit from a direct, tailored assistance from the National Employment Service in these offices.

In the meantime, the Government will practically do what the minister has done constantly during this period and that is to guarantee such interaction that is in function of the mutual benefit of both the employers and employees.

On the other hand, the employment offices will help the labour market to overcome its weakness that is fundamental in three respects: First, to the fight against poverty. Second, to the activation of country’s human resources and third, to the development of the labour market itself.

If they succeed in meeting their purpose and aims, the employment offices will be direct contributors to these three aspects, in terms of the approach and their improvement.

But, I believe that Mr. Bregasi touched upon an element that deserves to have our attention, that  is, if it is daily work for the Government and the National Employment Service to inform and encourage the jobseekers to address their problem at the employment office, when it comes to the employers, it might be appropriate to search for well-defined mechanisms within their various forms of organization and even in a broader perspective, perhaps the legal one, in order to guarantee a direct connection between every business and the National Employment Office.

By way of concluding, I won’t hide my satisfaction when I think that only a few days ago we had an entirely different reality of an employment office located in an apartment that someone had sold to the state or that the latter had bought from someone for reasons known only to them, but that was only a hideout between buildings at the end of a blind alley where one could expect everything but a job. Today, we have this new employment office in such a short time for a city like Durres that is so important to the development and relevant to the labour market.

This is only the beginning. We will move step by step in all the cities across Albania by keeping always in mind not simply how to set up an employment office for each city, but how can we, in the meantime, enable jobless people who enter every and each such office come out with a new job opportunity.

Our challenge related to employment is enormous, but we are confident we will win it over. We will do so not by turning the State into the major employer, but by putting the Government at the service of the jobseekers and employers and by trying to create these meeting points and pursue very clear policies that encourage investments that bring employment, mechanisms that lead to employment, interactions that produce employment, in order to create a situation where everyone who has something to offer to a job is able to find it.

Tirana’s Office is quite recent, with less than one month of activity and we are practically witnesses of the fact that employment by the business through that office has started to work out and yield results every day. Yet, these are very modest results in terms of figures compared to the outcomes we expect and for which we will fight to obtain, but they are sufficient for us to realize that through the new employment offices network we provide the citizens with a tool that until lately existed only on paper, whereas from now on will make it possible for the requests for job not to remain only on paper. Thank you.

An entirely modern employment office opened the doors for Durres citizens today. Established in a very short time and equipped in accordance with the contemporary standards, this office is made available for the citizens as a kept promise immediately after the inspection of the old employment office of the city by the Prime Minister.

The Prime Minister said that the employment offices in all the cities will provide a modern space for interaction that will bring the citizen, business and the Government in one single platform.

“We have not simply opened an office, but have, instead, created a new gravity centre that is crucial in attracting the jobseeker and employer to one single point,” the Prime Minister said.