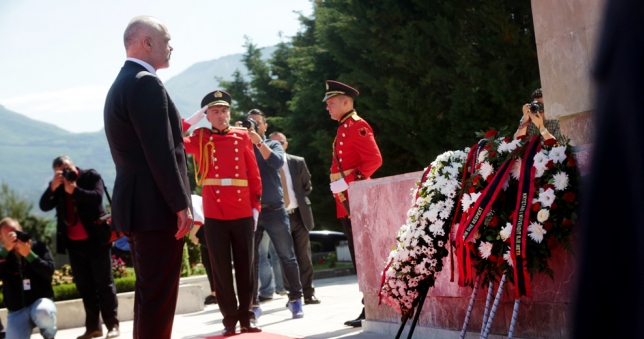 Speech by Prime Minister Edi Rama at a meeting with veterans of the Antifascist War for National Liberation, and with family members of the fallen, on Martyrs’ Day:

“Only the Albanians have a sense of beauty so strong, that they pay with their own life the pleasure of being the lightning in the human storms of war”, Faik Konica has once said.

To many, these may sound some beautiful words of a great man of letters, but for those who have witnessed an epic such the national liberation war, or who are the descendants of those who grew up with the stories of that war, these words hit the target because they speak of a living proof of our history.

I am very happy that we are here, today, commemorating once again the 5th of May, a red-letter day that has us gathered in the name of Qemal Stafa, but which also gives us the opportunity in this moment to evoke a story of courage, and also to reiterate our gratitude and respect for that story.

I am very pleased that we are here together with the President elect, until a few days ago the chairman of a ruling coalition which is proud of many things, but also for restoring the dignity of the war veterans trampled down for many years, as well as for restoring the relationship that every Albanian government should have, regardless of the political ties, with that war that lined up our small country on the right side of history, and which is still to this day a reason to feel naturally part of the European family, and certainly of NATO.

I am also very happy to say that, if when we took office to govern the country there were over 12,000 retirees who received a reward for their contribution during the war, and surprisingly many of those who received this reward were born from 1944 onwards, we have managed to clean this scheme and to actually take this reward where it is needed, to those who deserve it, and by doing so we have also managed to increase it.

Of course, we would like to increase it much more, as we would like to increase also pensions even more, because we are aware of their small value in today’s conditions. But I assure you that we have done our best, and I am convinced that we will have the opportunity to do more by carrying on with the reforms, by increasing the income, and by creating the conditions for better reward, not just for those who are employed today, but above all for those who have worked their entire life, and still do not receive a decent pension.

In conclusion, I am glad that I have the privilege to give the floor to the President elect who, for the sake of truth, thanks to his political talent, has managed to be today not only your and our representative, but also the representative of the other party, which neither affirms nor denies it. I am convinced that it will start affirming it over time.

So, Mr President elect, you are invited to take the floor, while I will sit next to the new Co-chairman of the Alliance for European Albania, my friend Petrit Vasili.