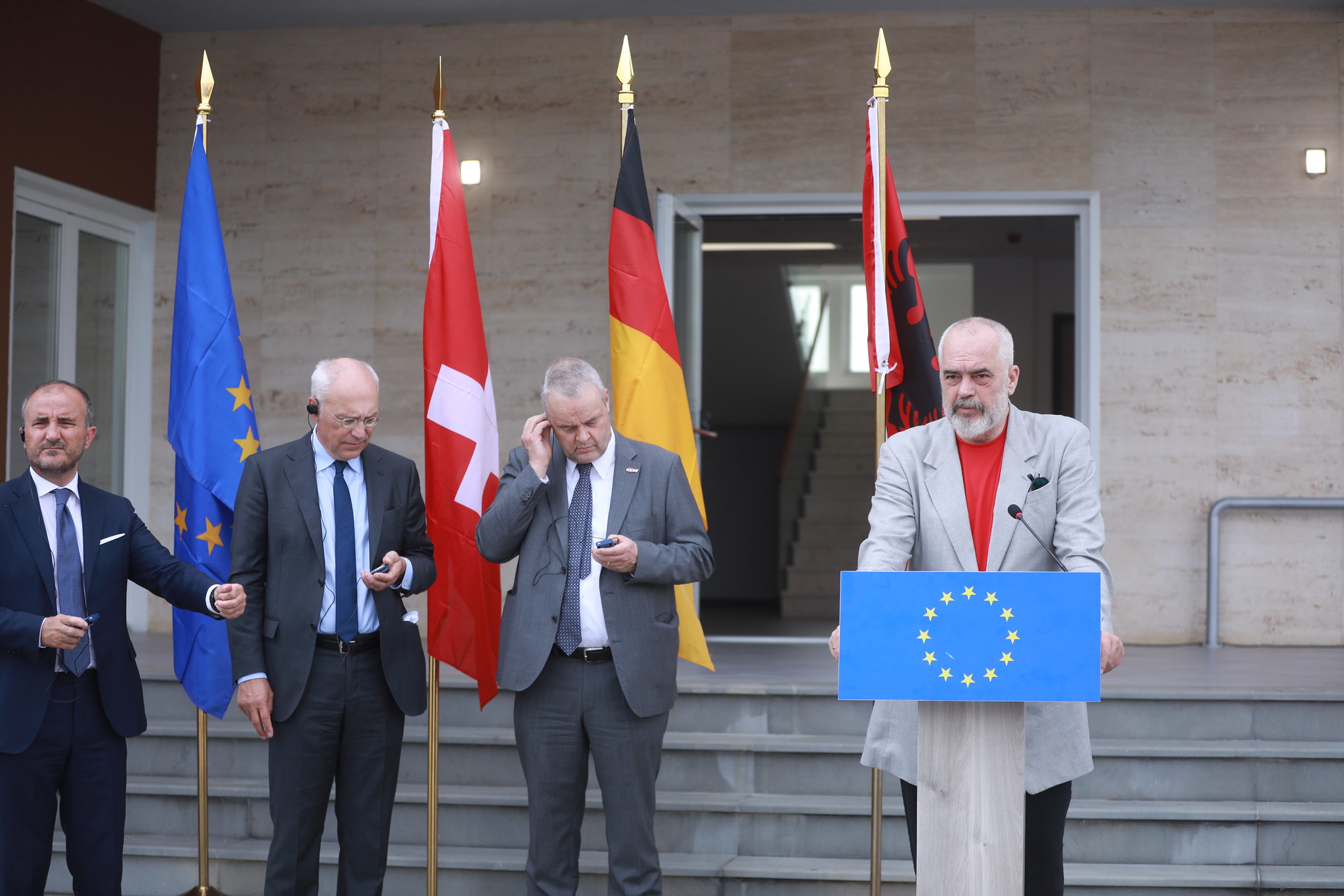 New water supply and sewerage company office building in the municipality of Kamez, a structure recently built from scratch, will set a new standard in delivering quality services to the residents in this municipality. Modern infrastructure has replaced the former dilapidated building, which was an epitome of the outdated water supply system that is now a thing of the past.

New Water Sector Programme, a joint initiative of the governments of Albania, Germany and Switzerland and the European Union will provide constant potable water supply to Kamez residents and a brand new sewerage system benefiting around 21,000 residents.

“The Water Sector Programme is supported by the European Union through a grant of 25.5million euros and is cofounded by Germany and Switzerland,” EU Ambassador Soreca said, adding the programme marks a crucial moment for modern Albania.

“It is a good start of the week here in Kamez, where we have come together with a group actually representing all the partners we have on this part of the world, Europe, the EU, the government of the Federal Republic of Germany and the government of Switzerland in view of a major and essential programme for Albania, namely ensuring water supply to residents in entire territory, hence putting an end not only to a three-decade long story of pluralism, but also a centuries-old story, as water supply to all citizens has never been 100% ensured throughout history of this country.

More than 100 constructions sites have been launched across the country’s territory, where work is underway to construct new and integrated water supply systems and works is being carried out in collaboration with our partners on a considerable part of them. Taking into account the fact that these are investments taking place in systems that have not been upgraded since ‘60s and 70s. Back then, the water supply systems couldn’t provide 24-hour supplies for a large part of the residents, which is always good to remember, because it is completely understandable that many claim we have yet to tackle water supply to residents in the 21st century.

But we are dealing with this issue because this is a process never before launched from A and finalized to Z. Indeed, the ample funds earmarked to support construction of water supply systems were fragmented and allocated to support segments of electoral segments, and therefore no investment was ever finalized to deliver on a vision, a program, an integrated project. We have actually lost a good part of this funding, without mentioning abuses with the funds, but primarily for the fact that we have left water supply systems to fragment and degrade much faster than would normally do.

So, we today can openly state that residents in the overwhelming majority of Albania’s urban centres will receive 24-hour potable water supply within this year. The next challenge is then certainly this territory, Tirana, Kamza and other municipalities comprising it, which is de facto Albania’s metropolis, where massive investments are underway, but where it will take longer time to fully complete.

I would like to underline a very important fact that assistance from the governments of Germany and Switzerland – of course the EU support as well, but by pointing them out I mean something else – are key not only in terms of funds or infrastructure construction, but also in terms of accompanying this whole process with capacity building. It should be clearly and openly stated that we still lag behind, because to a large extent, if not 100%, water companies in the Republic of Albania are part of the problem and not the solution, as a result of ignoring the basic needs for an enterprise to hire qualified technical capacities and human resources. Of course, good yet insufficient progress has been made in this respect too. The water supply enterprises have traditionally served to find government jobs for party militants, relatives, cousins, neighbours, totally ignoring the goal these enterprises are founded for.

Not only that, but the water supply enterprises, due to the constant mismanagement over the decades are the enterprises incurring highest debt rate in the republic. If we were to consider the overall debt ratio the water enterprises have accumulated over the years and a part of them still keep accumulating, the debt amount is higher than the debt the Power Corporation inherited when we launched the reform.

We can no longer continue with this business as usual.

The water supply enterprises can be nothing else but enterprises with full capacities in terms of infrastructure and human resources that guarantee this service. In this aspect, we have set a string of very positive and significant examples as a result of the German and Swiss governments, which, apart from funding, condition the investment, in the best sense of the term, with the capacities to make the investment project operational and make sure that investment is not wasted, as it has been the case with a series of previous investments in the water supply and sewerage networks, especially in the 90s and in the first decade of 2000.

I believe that an investment worth a total of 125.6 million euros through combined forces between the EU, German government, Swiss government and the Albanian government, is a massive investment, which doesn’t deserve to fall on incompetent hands or incompetence, indifference and an old conduct approach that has caused high cost for the country’s finances and the citizens.

The water reform needs for a push forwardas the water enterprises should no longer survive at the expense of the state budget. Albanian taxpayers in all municipalities can no longer keep paying to support a water supply enterprise in another area, just because of mismanagement over the past decades. On the other hand, it is indispensable that we start a phase to integrate these systems and make them more qualitative and more profitable. There is no reason for all these enterprises to operate independently. There should be shareholders working together within an enterprise. There is no point having separate water supply enterprises in Kamez, Vora, Tirana, Kavaja, and Rrogozhina etc. They can merge with each and every one of them becoming shareholders. This doesn’t mean these offices will be closed down and employees will become jobless. It means that the enterprise becomes a company that offers decent services to the citizens.

Wholeheartedly thanking the three representatives of these extremely important partner entities for their presence and by emphasizing that the reason I am here today, though I am usually not fond of inauguration ceremonies, is to strengthen this partnership and take this process forward. I would like to wish you all every success with their work and I am convinced that with the new conditions created, the whole team of the Kamza water company will be more motivated to better serve citizens in this municipality, where regardless of the number of votes we receive, it is important that the era of the water company as a warehouse of party flags and a rally unit is a now thing of the past.