In the 2018 budget, the largest investment package in the country 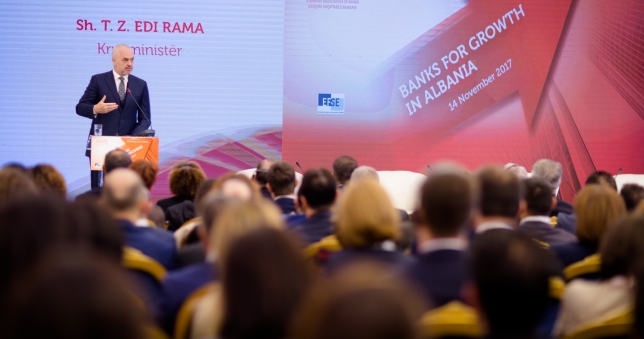 Prime Minister Edi Rama stated on Tuesday that Albania’s economic growth is forecast at 4.2% in 2018 or four-fold higher than in 2013.

During a meeting with representatives of the banks in Tirana, PM Rama said that budget 2018 proposes the biggest investment package in the history of the country.

The prime minister said that the budget next year amounts to about 700 million Euros.

He evaluated that Budget 2018 is the first big step forward toward Albania that we want, a country of state functioning, jobs and wellbeing.

In 2013, the alarm bells tolled of non-performing credits exceeding the level of 24%, a real threat which classified Albania in the World Bank’s list of 10 countries of the highest number of bad credits.

Four years on, emphasized the prime minister, the economic indicators are giving crystal clear signs of revival while bad credits have dropped by 10 points at an unprecedented minimum of ten years.

PM Rama highlighted the key role that the banks have played. The profit of the banks over the first six-month period was doubled, a historical record figure that equals that of 1999.

The prime minister concluded by saying that all these facts make us optimistic of Albania’s economic future as well as of the banking system.