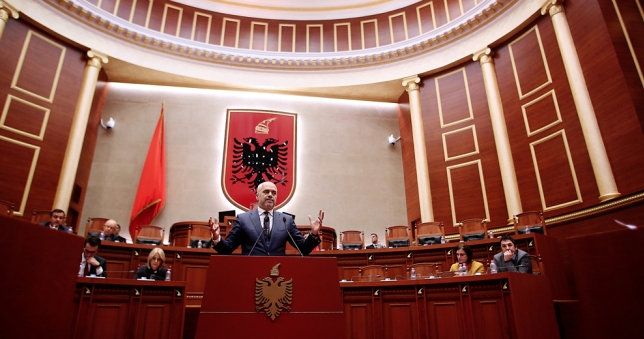 Speech of Prime Minister Edi Rama in the Assembly:

Fan Noli would be rolling over in his grave, together with the countrymen and workers, for I don’t know any countryman or worker who can trust Ben Blushi.

Mr Patoz, since you started with my clothing, I owe you an explanation. Normally, my relationship with clothing has been mocked for a long time, then discussed, and then it has become fashionable. If you are going to be here in the next parliament, don’t be surprised if you find yourself keeping up with this fashion. But the question is who paves the way.

My clothing today is not lack of respect. It is fashion and a message to the 1 million people who voted this government, so that they can understand that this government is totally different from the one just described here in this room by the MP who is the most annoyed with the agreement.

What has impressed me the most, or more precisely, what has disgusted me the most – actually it has not impressed me for it was no surprise – was that after the agreement, an entire kennel of political and media figures rushed to shovel dirt on the deal, and they couldn’t find any smarter way to do this than dealing all the way through with the pie, the cake, the baklava, the pudding rice, and with all kinds of culinary varieties where, attracted by the smell and their greed, most of them belong. Some of them say: “I’m getting in there to save the countrymen and workers form the yoke of these and those”. Some others say: “I’m getting in there to be the spokesperson of myself”, and some others: “I’m getting in there to be independent from the clubs of the media hamlet”. But, surprisingly, all of them have shown clearly that the only thing that annoys them with regard to the deal, is that they couldn’t find their piece of the pie.

And despite the looks and the books, Ben Blushi is someone who has strong ties with the pie. Unfortunately, he continues and persists to act here as a spokesperson of all those who feel deprived of their piece of the pie, because it has been said and resaid, and finally more than one changes have been made in the government in order to share the pie. The ministers who were voted today here, have not joined the government to represent the DP, but to guarantee the DP and the opposition in their capacity of technical ministers that they will defend the elections.

Not only this, but even if the DP didn’t take part in the elections, there is a previous order, which will be now monitored by the Deputy PM who was voted today, on stopping all expenses and all new procedures throughout the campaign.

Actually, even without the DP in the elections, until June 25 the government would have been merely an administrator of the day-to-day tasks, or of what I could call the state mechanism routine.

Secondly, Blush, the new directors will not replace the previous ones, neither in terms of making appointments, nor in terms of making tenders, giving concessions, and even in terms of touching a single piece of the pie which you see from afar, and the farer you go, the greater your appetite, the greater the venom produced by your hungry and insatiable gut. This means, Blush, that it takes a great courage to offend your intelligence and the intelligence of all those whom you claim to be representing as the pioneer of something that exists only in your mind, and which will remain only in your mind as an unwritten novel, the main character of which is you who wreak havoc, and then conclude saying that there is a union here against justice reform.

If this country, this room, and these parties have had the power to counter Justice Reform, they would have done it long ago. But they didn’t do it, they are not doing it and they won’t do it, even if they want to because there are two other forces which these parties here in this room cannot face. On the one hand there is the force of the Albanian people who want Justice Reform by all means, and on the other hand there is the force of our partners, of the United States and of the European Union which, as this session proves, are very unlikely to pave the way for any form of pressure or obstruction that might prevent Justice Reform.

Justice Reform will start being implemented precisely with the unlocking of the Vetting.

Saying that the Vetting is being voted in order to prevent the Reform is much strained, and unfortunately, it is very poor in terms of thinking. It is a misery that comes from a characteristic mental laziness of somebody who thinks he knows everything, who thinks that the others are to blame because he is not in charge of everybody, and who says everything against everybody, whereas it is in that determined situation only because of himself.

Let me remind you that, among other things, you said also one of your ordinary nonsense – you said that electors are punished, neither the commissioners nor the counters. It is typical of yours. You are ignorant of the things you talk about in this pulpit, and you are also lazy because you have no will to learn them. But above all, you are very hypocritical with the people you talk to, because you are afraid that if you taught them, they would be different from what you would like them to be, so that they can insult everybody as if they were all to blame for your condition, and also because you could share your condition with the condition of Fan Noli’s countrymen and workers.

You asked a question: “How many of the socialists who voted the SP will vote it again?”

I’m telling you, Blush, that those voting the SP will be more than they were in 2013.

Remember what I’m telling you. They will be much more than in 2013.

I don’t know if are going to be here again, but it is very unlikely that you will be missing in the political and media hamlet. Either you will be here or not, just be prepared because when the new parliament opens, I’ll be here holding this same position, wearing this same shirt. Then, I don’t know who will or will not vote in this room. But be prepared about the fact that I’ll be here, so that you don’t get disappointed much more than you got by the deal.

It was an escalation in misery what Blush did, as usual when he debates with me. But I stood up for a very specific reason. Blush is not the first one, there have been also others who, the day after the deal, took out of the graves the killed on January 21. That’s not all, but they killed them once again, just like did even this one here who, you remember very well, at least all of you, what he used to say about January 21. In order to kill them and their family members once again, so that they can inflame the spirits of Fan Noli’s countrymen and workers with whom the idler has nothing to do, he has issued a deformed statement by Aleks Nika’s uncle. I have never been suspicious that it could be a deformation because, given the emotional extend of the event, it might have been true for those families, and I’ve made absolutely no effort, but I’ve simply swallowed the hurt being convinced that time will show very clearly everything that is being said today by the organizers of this post-deal massacre, for the sake of one reason only: the pie.

But another concrete person, one of ours, who is also involved emotionally just like all of us in this history, has contacted, without my knowledge, Aleks Nika’s uncle.

This is the crazy, used and abused person here. By whom? By Ben Blushi!

I’m telling the Albanians just one thing. Try this! When you watch us on TV, turn down the volume, don’t hear what we say, just look at Ben Blushi’s face, and if he looks like the representative of the countrymen and workers, and the man who will save Fan Noli’s countrymen and workers from the yoke of the deal, then believe what he says. It’s very easy. It’s an experiment that works.

But it is sure that one thing will happen because of this deal. It is something unpleasant to Mr Blushi and the idlers like him, who wander around in our political and media hamlet, with the only purpose to confuse the people, – and what will happen is that because of the changes and the presence of the ministers who were voted today, the upcoming elections will guarantee the opposition as never before that the state machine will not be used, it will not rush against the opposition or against the citizens, with the whistle of a minister, that the big agencies will not be electoral armies, and after this, on June 26 we will have a winner, and we will have also losers.

There is no chance anymore that the loser will say everything has been said traditionally here after every election. This is something that hasn’t happened in 27 years.

But just like this did not happen, another thing will happen instead. After the elections, which will be accepted by everybody – because the opposition is guaranteed by the people it put in determined positions to make sure that directors and senior officials will not take the people to the polls by the hand, and make them take a picture of the vote, and so on – it will happen that the government and the opposition of tomorrow will be again government and opposition, but they will be together in the process to open negotiations.

This is the most fundamental and the most important point of this agreement.

There is something in this agreement which neither Blushi nor any of his kind in the political and media hamlet can swallow, and it is that this agreement transformed the crisis into a new opportunity.

It is not just what has always been done in 27 years when there was a crisis, “let’s use the guns just to move one, and start fresh.” Instead, a platform was agreed, not in order to co-rule tomorrow, but to co-rule the elections where all the parties will be guaranteed, and tomorrow everybody will be Albanians the same way, when we talk to foreigners and defend the interest of our country which, whether Blushi likes it or not, will open negotiations to the EU by the end of this year.

As for you, Blush, we’ll be listening to you from the clubs of the hamlet, together with those friends of yours who have but one concern: the pie you missed. You left the SP because of the pie, and now you’re left without it. You’re a man of pies, although you keep showing here the pie of your mediocrity. There’s one thing though that cannot be denied: Sali has been, is and will be to blame for sure!