On the path to the EU, the implementation of European reforms is inevitable 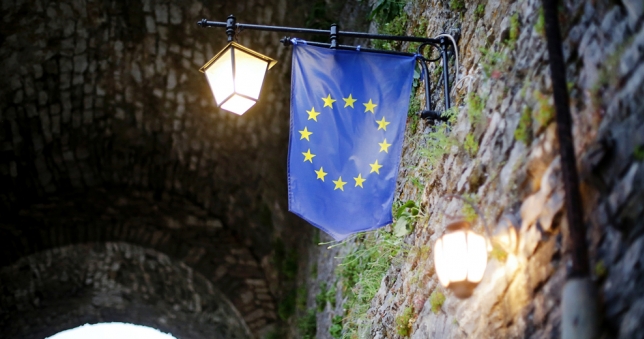 Speech of Prime Minister Edi Rama at the European Day Memorial Ceremony, organized by the Delegation of the European Union to Albania:

On Europe’s Day of last year we were gathered in Shkoder, and the sunset was similar to this one here in Gjirokastra where, although it is not exactly the same day – as Europe’s Day is celebrated on May 9, – we have gathered to commemorate this red-letter day in the history of Europe and of the entire mankind.

Just like Shkoder, Gjirokastra, the city which Kadare has baptized as “the steepest in the world”, contains the same material of the European identity’s core as we know it. Maybe, the choice of Gjirokastra today, with its steepness, is coincidentally related to the steepness of today’s Europe.

Gjirokastra is at the same time an old Illyrian settlement, which since the Hellenistic legends and later in Roman times, has been represented with a Byzantine castle and later with an Ottoman Bazaar. All this complex of layers of history turns this city into one of the precious hubs of world and European heritage.

During its millennial history, Gjirokastra has been a place where the crossroads have often taken on a special meaning, among which the famous crossroad of Argjiro, between death and slavery.

Tonight we are at a crossroads, both in Europe and here in Albania, and maybe even this wind blowing and theese thunders we have in the background as an atmosphere and soundtrack, describe at best the crossroads in which the most successful Union in the history of the nations is today.

Last year in Shkoder we talked about the danger of populism and extremism threatening our continent. Today, France has pre-election silence on the eve of the presidential election, where the two alternatives could not be more opposite: one for the European project of the founding fathers, and the other for returning 400 years back to Cardinal Richelieu’s nation-state doctrine.

I hope that this time the polls are not go wrong, and tomorrow everything in France will talk about the reaffirmation of the Europe we want. But the fact that in the meantime there is a second alternative, which is disastrous for the Europe, and which will be voted by millions of French people, does not overturn the question on the very next day of the European Union.

Undoubtedly, no one can say today that not everything that those who speak, engage and are actively involved in politics, and not just against the European Union, is wrong and they are all wrong. The Union is an unaccomplished building, but I am among those who see the Union’s hurting imperfection today only as the incompleteness of a project that is fantastic and can by no means be abandoned.

The current generation living in Europe is the first that has not known any war, and perhaps the European Union itself is a fundamental reason for the fact that Europe has today the first generation that has not known any war, and which makes decisions. However, today more than ever, it is clear at the same time that building up walls to keep those who were lucky to be born in Europe here in Albania, or in our region, is not an alternative, because Europe has tried walls also in its earlier history, it has tried the checkpoints, and the failures have been spectacular just like the scars.

Our region, which from Bismarck up to Churchill, was seen as a powder keg on which Europe is sitting, needs today more than ever to be connected to Europe. The need for Europe has brought us today to a new phase of relations in our region, just as the opposition to Europe is the constant threat to the progress of this new positive phase. We believe that today the Balkans needs Europe more than ever perhaps, but the European Union has never needed the Balkans more than today, because imagining the future of Europe with a body where one of its parts does not work, is blindness.

Even in Albania, we are at a crossroads today. This crossroads has been determined by the will to enter a new stage, which is symbolized by more than anything else by the will to build in this country a new justice, a new justice that would be totally impossible without the European Union, without the strong drive of our people towards the European Union.

Despite the resistance, the barricades, the walls we are facing as an obstacle to starting the implementation of the justice reform, it is clear that at this crossroads, the future will definitely win, and the past will not be imposed; Europe will definitely win in our hearts and in the will of the Albanians, and aversion to it will not be overwhelming as an expression of fear of the future and of righteous justice.

Undoubtedly, Albania is late in this process, just like other countries in our region are, but this makes us see clearly a very simple fact, that the speed with which the countries emerging from the collapse of the communist empire have approached the European Union is determined by the burden of the past. The lighter the burden of the past, the faster the way to sit at the European family table.

If for many European Union countries, which were isolated until yesterday within the walls of the communist empire, integration in the European Union was a reunion with Europe, our reunion, more than a reconnection with a past prior to the communist era, is reconnecting the strong thread of an old dream that has been passed down from generation to generation, as an aspiration to be part of Europe, but which could not become real because we have lacked institutions, and we have lacked a state with institutions.

I very much hope that we will overcome this period of crossroads in our domestic political history, if not with many things, at least with a sense of humanity because ultimately the quality of a democracy is not measured by how many people agree, but by how humanly people live the disagreement among them.

However, I am very confident that this is a time that, despite obstacles, controversies and hesitations, is working for Albania and the Albanians who want to see their country part of the European family, not as a bureaucratic process or as an administrative union, but in the first place as a Europe-building process here in Albania.

I am convinced that we will succeed, as I am convinced that on 18 June the Albanians will give a clear and strong message for all, that our path is Europe, that on this path the implementation of reforms that make us a European country is inevitable and cannot be delayed further in time.

Many thanks to Romana who is today the host of this activity in this castle where, despite the winds and the thunders, as you can see, we are still here and nothing has happened.