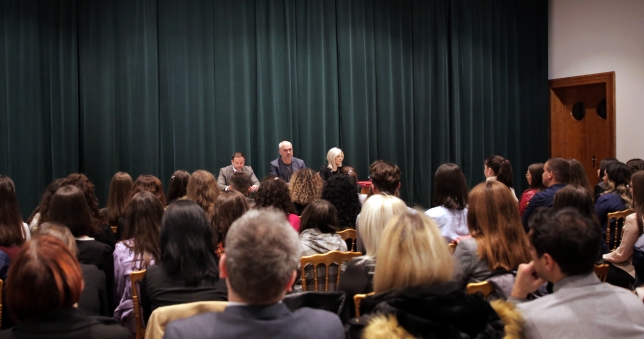 Prime Minister Edi Rama said Tuesday that the higher education reform has put an end to corruption, yielded impressive results and paved the way to competition and merit, whereas improving quality of education through improvements in teaching standards and conditions remains a challenge.

The government head met with a group of excellent students who will enrol in the country’s public universities thanks to the higher education reform.

“This reform uprooted corruption, nepotism and opened the way to competition and the merit-based university admission,” the Premier stated.

“The higher education reform allowed you all to enter university by walking the red carpet you have unrolled over years long of learning, reading and successfully passing exams without having the need to use a middleman in a certain party or pay money despite your families’ social status,” Rama said.

Describing the reform a dream come true, the government head noted that “every Albanian girl and boy will be able to earn merit-based university admission despite their social status.”

Rama said the reform his government carried out has yielded impressive results, but it takes time to make the reforms work.

“The higher education reform worked just like a Swiss watch. More than 87 percent of the applicants in the first round were admitted to the country’s public universities.

PM Rama noted that for the first time ever, the reform put the public and private education sector on an equal footing.

“However, we are aware that content and quality of education leave much to be desired. Therefore we have hired a leading higher education accreditation agency from the Great Britain which will scan all universities and draw conclusions,” he said.

The government head pledged support for the scientific research.

“This year we will make a great step forward by increasing support for the scientific research, establish the electronic scientific library just like any other European country starting from next year,” he said.