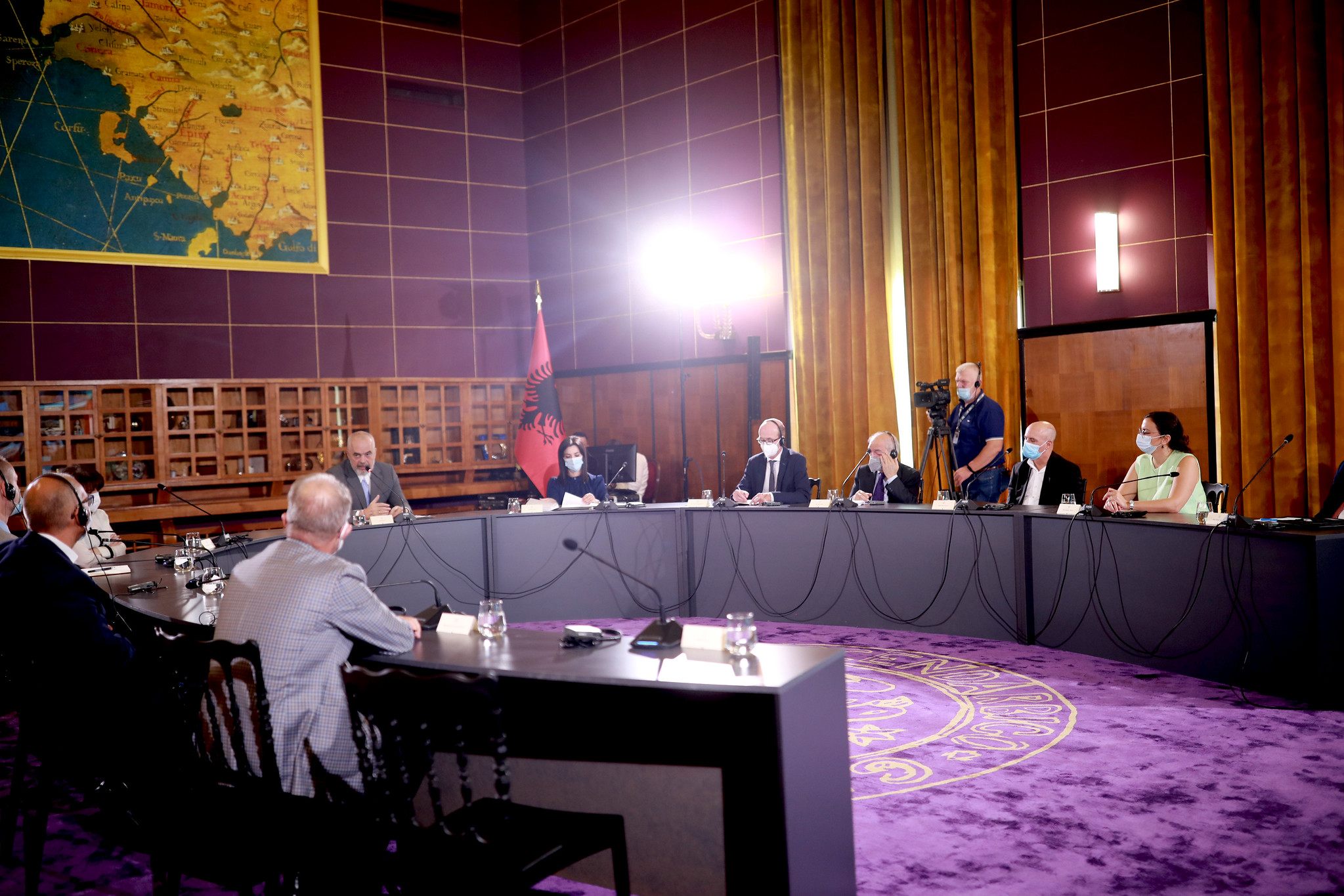 The Accreditation Board of the Quality Assurance Agency in Higher Education, a new team bringing together high-profile Albanian and international prominent experts in the academic realm, started operating today in the presence of the Prime Minister Edi Rama.

“The new board comprises a harmonic number of high-level Albanian and international experts, who excel in their academic career in various countries around the world. I am frankly grateful to each and every one of you for your readiness and unsparing commitment to give us a hand in this process,” PM Rama said in his opening remarks at the event.

PM Rama drew attention to a series of issues that almost led to the collapse of the country’s higher education and which were successfully tackled through the Higher Education reform and the efforts made by the outgoing Accreditation Board.

“We have gone through a very tough path and it was just few years ago we had to encounter a situation with our universities network being a done and undone network to please political appetite and it failed to meet any minimum standard. The accreditation process was a completely subjective, non-professional and political process as a result of which we inherited dozens of universities totally failing to meet the minimum standards and requirements for them to be considered reliable knowledge centres and therefore we were forced to close down many of them.

Another record worth mentioning was the total of 50 degree programs offered by our universities, with the minimum high school grade point average being 5.5. For the foreign guests present here it is probably worth explaining that 5 is the minimum acceptable passing grade. Many of these degree programs were made up by the aspiring university lecturers, as well as by the heads of all sorts of boards operating in the country’s higher education system until a few years ago.

A record number of university degrees or diplomas, around 1000 of them, have been issued to foreign students, who didn’t know a single word in Albanian, and presumably were attending a university with lectures being taught in Albanian, while none of the universities in question didn’t offer any degree program in a foreign language.

Diplomas have been issued by private universities in the form of clearing transactions, with the students paying for the university education by offering services like painting, laundry, plumbing, woodwork and other sorts of works serving the university owners, be it either for the university infrastructure, for the owner’s first and second house, to enter the university and obtain the diploma in exchange.

Students who failed to enter public university and coming mainly from relatively poor families that couldn’t afford paying the tuition fees and offered to the university owners whatever they could in exchange. There have been university master registers – and we are talking about the year 2013 and not 1913 – containing information that a certain number of diplomas have been obtained by the “boss” and it remains unknown whom these diplomas have been issued to, but they have been distributed by the boss. In other words, the university diplomas were also somehow gifts issued to individuals who didn’t attend the university even for a single day.

Refraining from going over other details, because we may go to a territory, where the problem has been addressed, but it has yet to be ultimately solved, namely the misbalance among the university degree programs that make Albania the country with the highest number of lawyers for square kilometres in the world.

A system of “buying the calmness” by the government was established regarding the youth employment needs by opening the university doors to everyone without ensuring the higher education quality and this way the government used to buy time by saying everyone is being granted the right to attend the university and we have no reason to worry about and try to find a job, because everyone will become lawyer, economist and so and so forth.

The reform marked a strong turn and any operating private or public university should be accredited, provide education quality for the curricula, degree programs, the academic staff and the scientific research programs.

“The university accreditation was launched under a key cooperation with the British Accreditation Agency, whose presence has given credibility and it has been a challenge to the universities themselves. Accreditation is definitely an ongoing process and the effort to launch national student surveys in order to create a clearer picture of the situation has helped a lot in this direction.

Recognizing the successes accomplished so far, the Premier acknowledged that the current problems and deficiencies marring the Higher Education today are really serious and the greatest challenge facing the government today is to provide young people with the opportunity to attend leading international universities without having to leave Albania.

“I would have wished to be completely sincere and straightforward with you so that one doesn’t create the idea that the biggest contract between the situation in 2013 and the current situation is a reason that we in the government deem it a sufficient reason to be happy with our performance. We are not happy at all and the today’s situation in our universities is not as such that would allow us to sleep peacefully, although I believe no responsible government, even a government in a developed country, can’t sleep soundly when it comes to the schooling and education level. The problems facing the higher education system are serious and the biggest challenge we face as a government is how to provide the best performing high school students graduated locally are provided an alternative choice to study in the country instead of going abroad. Absolutely, we can’t and we have no reasons to think of ways to refrain young people from going to international leading universities, but the fact that there is a significant number of students who go abroad to attend a foreign university, not necessarily the most prestigious ones in most of the cases, just because the alternative is far from being attractive, is a fact that doesn’t make us feel proud today compared to where the Higher Education should be taken.

Taking pride in our accomplishments in the efforts to lay a cornerstone of the higher education is not an excuse not to accept the tough situation we need to deal with successfully. Therefore, I am really grateful for your presence and readiness, because if for the Albanian board members this is an easy task and commitment in terms of the sense of contribution, for other members included in this Board is more than this as this is a sense of mission to help Albania’s Higher Education system move forward.

I haven’t attended any meeting of the Accreditation Board and I am not going to attend any Board gathering in the future. The Accreditation Board is independent and it should remain as such. We are here to ensure your work integrity both through our non-interference and through our support for the Board decisions. On the other hand, we are also here to take advantage of your know-how and experience, benefit from the right decision you will make, and draw lessons from your experience to move beyond the internal bureaucratic procedures of the decisions. This is the extent of our relation with you all.

I would like to assure you that what we expect from the Board is maximum integrity in any Board decision, no matter whose interests affected in our academic system, because any decision without integrity would affect thousands of young people and parents and the future of this country itself. Wishing you all that you accomplish your task with same readiness and availability you have demonstrated and be committed to take forward this process by interacting with one another and begging that each and every one of you to help, guide and advise us anytime you think it is worth helping, advising and guiding us to tackle a problem. We would be really grateful for that.