Urban transformation of Lushnje has started 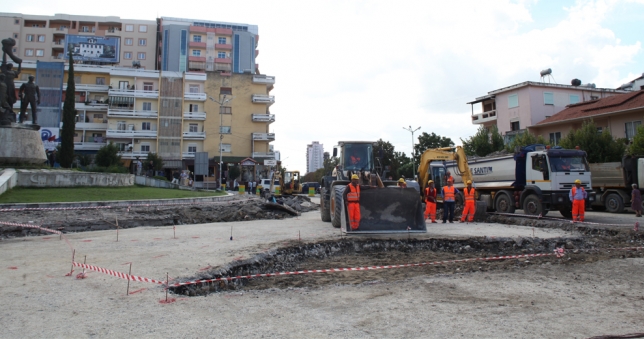 It is a pleasure to be here today, not to seek votes, but to make reality those things to which we committed and for which we were voted.

Unlike Fatos who thanked me, I want to thank you and all citizens of Lushnje who voted us and trusted the Alliance for European Albania, a coalition of the Socialist Party and the Socialist Movement for Integration, thus giving themselves the opportunity to test us so that we could come here today and talk about tangible works, as well as carry forward tangible works.

In order to restore this gravity, we started the program of Renaissance for cities from city squares so that squares inherited from another time can be transformed in square for citizens, in public spaces where there is room for everyone: children, old people, families and young people. Today there are practically 18 thousand m2 of public space, whose conditions you know very well, that have embarked on the path of European transformation. This square will become one of the most beautiful squares in Albania and one of the most attractive meeting places for citizens; for citizens of a municipality that only after less than a year will be much greater because, thanks to the new reform of the territory and territorial organization, the municipality of Lushnje as any other municipality in Albania will have more breath, more potential and more favorable conditions to develop in a sustainable way both economically and socially.

This square, work of a group of young and talented architects, is the beginning of a chain effect of urban, economic and social transformation. Other MPs of Lushnje should have been here, either Erion Brace or Arben Çuko, but both of them are part of the Economy Commission that is discussing the review of the government’s budget.

For the first time in five years, the Albanian government is revising budget marked by growth, not decrease. We are reviewing the budget because we passed a positive forecast. Not as has happened for five consecutive years when the budget was revised because forecast was overstated and fund cutting was necessary.

After revision of the budget is voted in Parliament, we will fund 51 projects so that the work stalled due to lack of funds for the road connecting Berat with Lushnje will continue at high rates. Transformation of the road that connects Berat with Lushnje will be an added value for you, for your city, because we all know that Berat is a great cultural and tourist resource. Despite the terrible situation of the road, inflows have been increasing in Berat and they will increase even more thanks to the road transformation and all transformations that are taking place in the city of Berat. Lushnje will also benefit from this, but in order for Lushnje to benefit, it should have something to offer as well. This square will be one of the attractive points for those who will go and visit Berat. And, certainly, not only the value of public space will increase, but also the value of all surrounding commercial environments, the value of the apartments and so on, and finally we will enter a chain process of improvements.

At the same time, the realization of this square would be incomplete, even as a first step, with no access road. You know very well the unimaginable conditions of the access road of Lushnje, which does not resembles at all to an access road to a main town in Albania, but has been reduced to an alley filled with potholes, mud and ugly informal buildings on both sides. For this reason, in order to bring a very important transformation, we have decided to invest from the roundabout of Plug to the access road where the road joints the city. I am convinced that both these projects together will pave the way to work for carrying forward other projects. Now, thanks to budget review, we are discussing also about the road that connects Lushnje to Karbunara which, you know very well, is another scandalous road. Investing in that road will again give us an added value, not just in terms of comfort, but also from the economic and social point of view. Together with the investment of the road Lushnjë – Karburnarë, from here to Karbunarë, imagine that in one year and only with the budget of one year, we have financed for the city of Lushnje more than the Government has invested in the last 10 years taken together. This funding is of course your merit. We are not like others who would show off with the money of taxpayers as if the money was their own, or would take it from the house savings as if they were making people a favor when they built roads. Instead, what we are proud of is the way we are collecting the money, the way we are planning and spending it, because we are doing it in a totally new way. This is the reason we must be proud of. Because today, taxes in Albania are paid by everyone, without exceptions, not only by the weak, and who fails to fulfill this obligation goes straight to jail. Today in Albania, those who earn less do not pay more and those who earn more do not pay less. It is the contrary. Thanks to your vote on June 23, those who earn less today pay less. For this reason, nurses, teachers, employees, all those who earn less than 1.3 million leke per month, bring home more money than yesterday because they pay less taxes from their income. While others pay more. But, with the taxes of those who pay more we make projects and fund the roads of development. These roads of development start from the cities and do not turn away from the cities in order to pave villages with asphalt during election campaigns. On the contrary, they look at the cities in order start and actualize the integration of all communities within the borders of the new municipalities of Albania, which will have much more financial opportunities, much more economic and social development and many more quality services for all of you.

I know very well that neither this square, nor that road or other roads will solve in the blink of an eye all your problems. But, on the other hand, I am confident that by taking the right steps on the right track, we will go step by step towards solving all problems properly.

Thank you very much for being here, and I assure you that this is just the beginning!

I am confident that I will be back in Lushnje for new sites, for other good deeds.

You’re lucky, because there is a group of people who are seriously committed, both in local entities and in the Parliament of Albania. In Parliament we are two parties but one only force that works in one direction only, for a single purpose: to justify every vote of June 23 and serve indiscriminately every Albanian, those who voted for us and those who did not, to improve their life quality and give them one more reason to feel good in their home.

Prime Minister Edi Rama was today in Lushnje to launch the government program for redesigning urban cities. Within seven months, thanks to an investment of approximately 237 million leke for the access road and the central square of Lushnje, its citizens will have urban areas that meet all modern standards.

An investment of 129.805.000 leke will be allocated for the redevelopment of the urban center, which will complement by the pedestrian area, commercial and business units redesigned with the intent to revive the square, green areas and unify facades. The needs of citizens will be met better after the project, which includes 18,000 m2 area of central square and 1060 meters of road currently in bad condition, is completed.

There is also a second project worth 107.574.000 leke to be invested in the access road of Lushnje, which will be extended and provided with all road elements and lighting; in addition, surrounding urban areas will be re-conceptualized.

In this visit, the Prime Minister was accompanied by Minister of Tourism and Urban Development, Eglantina Gjermeni and Mayor of Lushnje, Fatos Tushe.

Minister Gjermeni praised the work of the municipality to prepare a competitive project. For Gjermeni, the projects that have started are a fulfillment of a remote desire of the citizens of Lushnje and a commitment of the Government.

“The promises written in the program of our governing coalition are becoming reality. It is also my pleasure to say that these projects, which have begun to turn Lushnje in a construction site, will soon be realized. The pictures that you see here are the reality you will see very soon in Lushnje” – minister Gjermeni said.

During the inspection of the access road, Mayor Tushe raised concerns about the existence of buildings adjacent to rail tracks. These building were equipped with documentation of ownership only on September 13, 2013.

“On both sides of the road there will be 3 m of sidewalks, two circulation lanes of 7m each and 2m of traffic island. Of course, there are here buildings that are adjacent to the rail track for which intervention is definitely required, because the law does not allow 25 m from the track. It is unimaginable that such objects can be adjacent to the rail track” – Mayor Tushe said.

Informed by Tushe that these object were mortgaged on Sept. 13, 2013, only three days before the government was voted, Prime Minister Rama said that all illegal constructions will be demolished.

“A good cleaning is required here. All these structures built on canals, adjacent to the rail tracks, must be demolished because it is completely intolerable, illegal, scandalous”, the Prime Minister concluded. The Prime Minister went all the way to the entrance of the city where all illegal constructions have been destroyed on both its sides.