Opposition stands no chance to confuse even a single Albanian 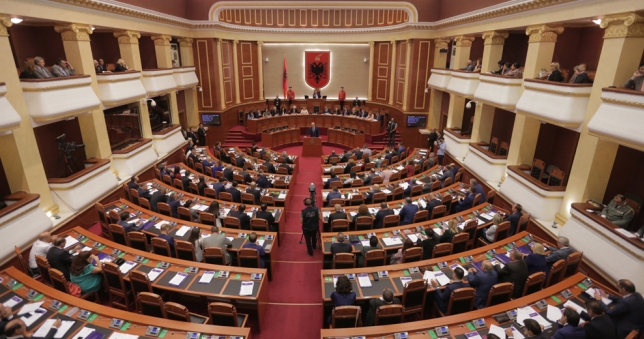 Since yesterday night, our disoriented friends keep repeating the expression: “The Voice of America said.” That is: “America said.” Unfortunately, it is the second time within a short period that the Voice of America becomes the mouthpiece “of Tirana’s garbage bin.” By providing hundreds of documented pages, first time we demonstrated that the news over alleged political hiring in the country’s penitentiary was utterly fake, whereas this time I would say only this: Nothing new from your front, but a mishmash of words that stand no chance to confuse even a single Albanian. Zero chance.

Now, since you love America and since you think of Albanians as untraveled provincial and apathetic individuals and as such you can drum up support by saying: “America said that,” I would like to tell you all that I personally and this government have direct communication with the United States. After this speech, I would have to leave you as I am awaiting a direct communication with the White House and depending on how much I will be authorized, I will certainly inform you about that.

Sali (former Prime Minister Sali Berisha) of course commenced his speech mentioning the U.S. and addressed me a direct question about my wife. I have never answered, but this time I will, because I also have a direct question for Sali.

Sali, ABI Bank is a bank that is directly monitored by the U.S. Federal Banking Regulatory Watchdog and should my wife would be a shareholder, it is for sure that I wouldn’t have been allowed to cross the Atlantic. Now I do have a direct question for you. Are you allowed to cross the Atlantic Ocean, if you wish to do so? Answer to this question. You addressed a direct question. I provided a straightforward answer in order to make a direct question. Would cross the ocean, if you want? If I were the one you describe, I wouldn’t have been able to cross the ocean, let alone to communicate with the White House upon a request from the White House, since I am not given the opportunity to require such a communication.

You made comments on the Corruption Perceptions Index of Transparency International. I inform you that Albania has dropped from the last year’s rating, yet we have jumped 15 places from the Albania we inherited from you at the 116th place, with Transparency International not saying what it noted this time that “Albania has dropped because anticorruption reforms have been stalled.” Instead, it said that Albania is Europe’s most corrupt country. I am talking about the 2012 report, when you took the floor at this hall to say that Transparency International worked for Edi Rama. I want you to prepare an answer to my question, but think well about the answer you will provide here. If you don’t answer, I will understand, because it is a very difficult answer. The ocean is not like the Valbona River where you issued permits for hydropower construction and now hide, because it is you who destroyed Valbona by issuing permits Valbona hydropower plants. You issued 15 permits for hydropower plant construction. We succeeded in cancelling 13 of them so that we were not referred to that arbitration tribunal. So you know that the ocean is not like the Valbona River, right?

I wouldn’t have attended the today’s session if it was not for a way more important issue than what you are stating and saying here. By the way, it happed to see a meeting of the opposition leader with a potential protester on February 16. He complaint that people were fined for smoking in bars and the opposition leader urged him to join others in the planned protest in boulevard.

So all those who don’t like state-building and the rule of law will take the boulevard. All those who refuse to pay fines will take the boulevard. Lulezim (main opposition Democratic Party leader Lulezim Basha), I have repeatedly told you, because you know that we communicate with each other constantly, although you pretend that you don’t, you should learn that from now on nothing will be taken for granted, Right?

Therefore, I urge you to come down to earth and give up stories about protests that oust us and join us to contribute to the election reform and fasten your belts well and be prepared for the June election defeat, as I have already promised it. You will win none of the municipalities that are currently headed by the Socialist mayors and moreover you will even lose the Kukes Municipality too. We will govern Kukes Municipality as we will also construct the airport, the new stadium and everything else that you didn’t build over all these years.

I would now like to say something about students as today is the last deadline, but many university secretariats have failed to complete the required documentation because of the opposition militants in the universities. I want to tell students that government has made available whole funding and the secretariats’ documents on the tuition fees and scholarships remain to be handed over. We will also postpone the deadline for applications for the vacancies in the public administration under the student employment programme. We have announced the first 800 vacancies and around 400 applications have been filed to date, while many others complain because they don’t possess the required documentation.

I didn’t ask whether you have received an invitation from U.S. This was not the question. On the other hand, by thinking how to answer without providing any answer at all, indeed you made a mistake. You said that you no longer go on business trips abroad. But you keep traveling abroad together with Fatmir Mediu (chairman of Republican Party) and avail yourself of any opportunity to visit the Bundestag and make negative comments against Albania. You avail yourself of any opportunity to travel abroad and you inform your digital followers about it. Surely there are people around the globe who miss and invite you. My question was, can you cross the ocean if you want?

I used to have a friend who was just like you who always boasted about being a brave man.

I am not like you. I think it is in the honor of the country, in the honor of the office I hold today and someone else might take over in the future, that you are allowed to travel across the ocean, if you want to do so. However, the way you answer makes me think there is a problem.

However, it is good that you answered like that, because this time I want make the question that was about to follow. But be careful, because you concluded your remarks by commenting an issue that had nothing to do with my question and your concern. You said that I had entered into a risky business. You should not forget that your allegation suggesting that I have paid 20 million dollars in order to meet the U.S. President compromises the U.S. President too, because he is not allowed to do so. But this is no longer a problem for you, because everything you say is no longer taken into consideration. You have challenged the United States of America several times from this very podium.