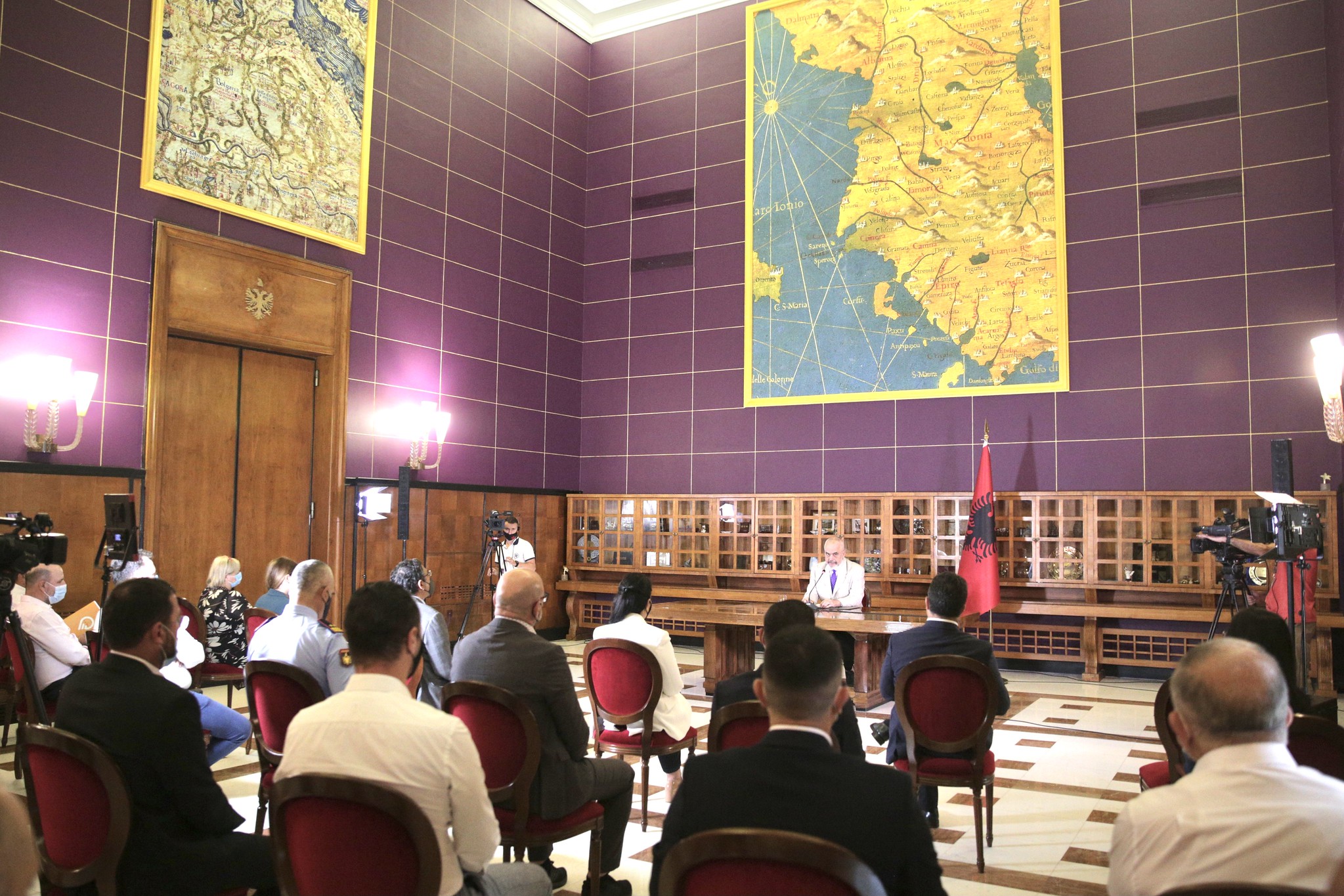 The today’s meeting is an open gathering as part of the ongoing meetings to share a series of concerns with the heads of contracting agencies, as well as highlight the need for strong commitment to timely and quality enforcement of the new law package regulating the area of public procurement.

Just like in the previous meeting, I won’t go over the details to highlight the progress that has been made in this area through the tangible results and the data already available, because we are not seeking to look back so that comparison can be drawn with the past, but instead we look forward to bridging the gap between us and the future as soon as possible.

The new legislation package is precisely designed to provide the contracting authorities and the Albanian state with new effective means and tools by ensuring a procurement regulatory framework in Albania, best aligned with the European legislation, as well as by addressing all the findings and various recommendations forwarded by the international bodies, the constant demand for legal changes from different local institutions, and the problems encountered during the public procurement process.

The new package clearly addresses the need to enhance integrity and responsibility of all parties involved in this process and not only the contracting authorities, but also the economic operators, as well as to strengthen the control and monitoring mechanisms, as well as the punishment mechanism for the potential breaches.

I would like to provide a brief assessment, about which I would encourage all of you to look at it in a parcelled according to the area of competence, as it contains important data to bear in mind in the future.

The recommendations forwarded by the Public Procurement Agency are not written in stone and as such they are not undisputable, but it is also undeniable that failure to react formally and provide arguments against the recommendations regarding certain issues is definitely a flagrant violation of the state ethics. Everybody knows, it is the best kept public secret in Albania that main enemy to the public procurement problems is establishing tailored criteria to ensure qualification of certain operators and therefore directly affecting participation in tender procedures and narrowing competition among the economic operators in the public procurement procedures.

Data review on number of bids forwarded in the procedures published by the state institutions show that the Public Procurement Agency has assisted 936 procedures during 2020 and the first half of 2021 and the average of qualified bids is estimated at 2.56.

It is important for everyone to know that the administrative investigations conducted by the Public Procurement Agency, acting on its initiative or on the reports drafted by the Supreme State Audit, at least 57 procurement procedures have been subject to administrative investigations in 2020 and the first half of 2021. What matters most is that the investigations have found that calculation of the maximum funding is marred by irregularities, while qualification criteria that have nothing to do with the contract’s object have been applied, whereas economic operators have been disqualified and certain operators that fail to meet the qualification criteria have been actually declared winners. For these reasons, fines have been imposed on 41 employees, while 92 employees face disciplinary measures.

If we are to consider the figures vis-à-vis the entirety of procedures, these figures are considerably high. But if we are to look at – and we will all persistently do so – the public perception over the tenders launched in the Republic of Albania, then the view is magnificent in terms of its negativism. However, at this point it is very important that a serious assessment is done over our human resources involved in these processes, because what attracts the attention most is the low level, sometimes the level of understanding the process itself, which in turn triggers a chain effect and degrades the process to yield heinous results.

The main goal in all this effort and the major motivation for this entire process, which has been materialized with the new legal package, is that nobody is deprived of opportunity and rights and everybody gains what they are entitled to.

Of course this is easier said than done, because the process itself is quite complex one. It is a process about which the European Union itself is still seeking to find new ways and legal ways to perfect it, but it is totally possible, objectively possible that this states moves to a whole new level in terms of public procurement procedures in a near future by primarily making sure that every institution works as a link on this whole chain, and not as independent entity. By working as a link, it works as part of a chain with the communication being 100% guaranteed.

The Public Procurement Agency recommendations are neither the Bible nor the Quran. In other words, they are recommendations that can be questioned and professionally argue why this or that recommendation needs to be reviewed by the Agency itself. However, if a single recommendation falls into deaf ears and no reply is provided at all as if the Public Procurement recommendations are messages in a bottle thrown into the sea for the waves to wash them ashore no matter where. The Prime Minister’s office will report and refer to the Special Anti-Corruption Prosecutors office, SPAK, every case like this. It is then up to the suspected individuals or their lawyers to demonstrate whether they have violated the public procurement rules unknowingly.

There is a set of easily achievable objectives if whole public procurement system is consolidated through a process with its deadlines being unquestionable, I don’t mean the legal deadlines that are naturally indisputable, but I mean the handling deadlines, including replies and internal institutional interaction and ensuring all economic operators that the trick about the deadlines no longer works.

We should boost competition and this certainly requires increased reliability, since the economic operators’ participation in the procurement procedures, although currently significantly higher compared with the past, it is still relatively low. Special work is needed and heads of ministries should insist to boost technical capacity, because certain things that happen in the process and that do not guarantee quality are result of incompetence and ability to enhance accountability of contracting authorities in planning, organizing and handling the procedures.

The new legal package will effectively address the arranged the tender criteria fit for a certain company or operator, forcing the institutions to public the arguments, specifications and the criteria alongside other procedure documents.

There is also another important aspect that the contracting authorities need to monitor and this is the behaviour of the economic operators, their withdrawal from tenders, the contract signing, the bids rotation, namely bidding companies that take turns at being the winning bidder, false bidding and take the necessary measures to refer the cases to the relevant institutions to launch administrative investigations. When deeming it reasonable, the contracting authorities address these cases to the Prosecutor’s office.

Another important element where significant yet insufficient improvement and progress has been made, is the contract implementation. At the end of the day, a badly and incorrectly implemented contract blows up even a correctly held procurement process.

I would publicly encourage that you examine and familiarize yourselves with the new legal package in details. Everyone should be aware that with the new legislation, the heads of the contracting institutions will be held directly accountable for the fund management and the number of participants in the procedure, the value saved, the number of negotiated tender procedures and this is where the ministries have set the most significant examples of success thanks to the personal commitment of the ministers themselves and where we have together decided to ultimately put an end to the non-negotiated tender procedures we inherited and we have succeeded impressively in this respect. I am saying this for a simple reason, because it clearly shows that tangible results can be accomplished if strong commitment is demonstrated, even in the cases with all arguments seemingly totally unfavourable.

There is a number of significant examples of the approach change in terms of the contracts implementation and it is absolutely significant that even huge contracts facing a number of challenges and obstacles that emerge because of the inherited deficiencies – as it is the case with certain contracts with the Ministry of Infrastructure – when there is strong will and commitment,  undoubtedly the state is the one to win and not the inertia and the old habit of the operators, which, not only because of them, but primarily because of the state, are used to play and arrange contracts in collaboration with one another and it was just few years ago when Albania somehow became a ridiculous country with 99% of the road infrastructure contracts being really disastrous. But the retrospective is worth highlighting today just to grasp the potential and not to claim that everything has been already done, because there are many other examples in the subordinate institutions, whose represents are here today, and they are cases proving completely the opposite.

There are many reasons that should set the third term in office apart from the two previous terms. Of course, most importantly, if we were in a bit of a hole during the first term, we managed to lay the foundations during the second term and we should go up during the third term in office. The distinguishing reasons should by hook or by crook include the level of competence, efficiency and transparency regarding procurement of the public funds. That’s why with the new public procurement law already into force a special effort is needed so that the compliments from the European Union and international partners for the qualitative increase of the level of new legislation are instead received from the Albanian people for the quality growth of public procurement. The entire public procurement system should be surrounded by a high wall to prevent the penetration of any atmospheric, political, media, economic, social and cultural agents.

The message we should convey should be supported through facts, results and overall results so that the public perception is altered. Because there is another worrying, but also important element. If we are to look into the progress of the public procurement procedures no comparison can be drawn with the public procurement procedures applied few years ago. No comparison can be drawn. However, the significant improvements and progress have failed to alter the broad public perception and we stand no chance at all to hold citizens accountable for this. We should understand it doesn’t take many, but just few cases for the perception not to change or even become worse, because the citizens’ expectations are much higher, because the citizens’ exigencies are much higher, because time, both for the people and us, simply flies and they can’t wait another 30 years to see a state, with everyone receiving what they are entitled to receive from the public funs procured for public works.

We have all the reasons to believe we will achieve huge success in this respect. And these reasons are found on the comparative table between the first and other levels. The comparison table suggests that the concentration of attention and the exercise of will by the heads of the main institutions has paved the path to change. It could be still insufficient, but the path has been open. As the comparative table shows, when moving to the second level, not to mention the third and fourth levels, the problem is more complicated and must be addressed through strength, determination and great perseverance. Thank you very much!