For a historical leap against power theft 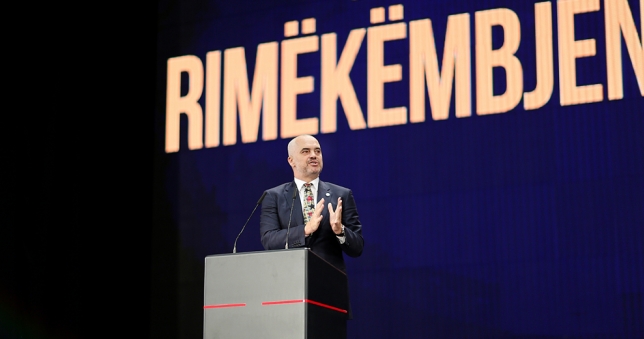 “First of all I want to thank the Speaker of Parliament who, with his presence here, conveys the message of the “Alliance for European Albania” whose intent is to definitely make a historic leap, both in the legislative process and the executive one, so that Albania will be transformed from a country where theft power is certified and internationally recognized, politically and even legally, since it hasn’t been punished for 20 years in a row, in a country where energy is considered as any other thefts, a crime that is punished and even more punished in case of recidivism.

A few days ago I had a chance to meet with the Executive Director of one of the most important power companies in the world, the Norwegian “Stattkraft”, and he told me how Norway was transformed from a country where people would starve to death and be forced to leave their homeland in order to fight starving, into the country it is today: a real world energy superpower that, thanks to a radical transformation in the approach and administration of its energy sources, is ranked today among the wealthiest countries in the world.

The reason why we are here is to launch a massive operation, a deep operation that aims at definitely turning the page in this sector, thus definitely transforming energy from an asset that can be easily stolen, into a source of welfare and economic growth, a source of profit for Albania and Albanians, with the premise that anyone who consumes pays.

Today’s conditions are such in Albania that stealing has become a natural thing and it is not surprising at all – which would be in every normal country – that many reasonable people, our fellow citizens who live in countries where power theft is unimaginable, oppose to this operation we announced 5 days ago by saying that what we are trying to do is unfair, because Albania is a poor country and people steal because they are poor.

I’ve run across this reasoning more than once. I would like to start from this reasoning in order to reinforce the message conveyed here today and to support with all my strength the operation launched today across the territory and stop only after power theft is stopped.

Likewise, it is not poor people who use energy to light the lamp or to turn on the TV the reason why we dive every year into a pit of 150 million Euros debt and the reason why he have inherited a system which in its chain of debts has an internal debt of 1.1 billion dollars. It is not because of poverty! It is not because of poverty that those who ruled this country for many years dealt with the relationship with the consumer of electric power as an electoral relationship, winking to any big or small consumer and making them believe that even if they steal, they’ll be under to protection of Lala Gjoni. Although Lala Gjoni would not only close his eyes to theft, but would never allow that the price of electric power was a fair price for all and with all.

So, where is the difference between power and these two? How is it possible that in the 21st century we can still accept and consider power as a free good and consider power theft a fair thing in a society that cannot afford paying for it?

It is not true that Albania cannot afford paying for power. Truth is that Albanian will not be able to overcome this stage of economic and social development, without paying for electric power.

Today we have not only public institutions but also a lot of people who are paid as state stipendiaries by citizens – and I am not talking about those among you who collaborate to steal power – I am talking about those who do not pay for power. Likewise, we have still today an administration culture of public institutions that is not related to performance criteria and neither to criteria to efficiently use financial resources. This means that we have public institutions that continue accumulating debts towards the distribution company, because they allow that their power supply net be at the same time a source of illegal supply for the neighborhood around the establishment.

We have addressed all this through the changes we have proposed and have been able to do in the Penal Code, in the legislation or sublegal acts and today we are ready to go further because we have laid a basis on which operation will not be a campaing that starts today and finishes a month later, but a process that will stop only when everything is on the track of legality and nobody will ever think that will get by by stealing power.

Figures are stubborn and stubborn is the reason why every Albanian, every reasonable person, every ordinary and honest person who implements the law in this country and want a future for themselves and their children should join the Government, in this major effort that actually has a historic feature.

There is a historic feature to choose between: do you want to be relieved once and for all from this heavy burden that is suffocating our country and doesn’t allow it to have a free and fast economic growth? Or do we want to continue closing oour eyes, continue doing what we are doing and meanwhile winkle left and right to power thieves thinking that elections are coming and sooner than we think, we will find ourselves in a major economic and power collapse which will then force the whole society to undergo even more painful operations, to endure even more major economic and financial wounds in order to overcome a situation which, if today is an agony, very soon can turn into a clinical death?

We really are in an extremely critical moment and we have a chance. A real chance proved by very attentive analysis we have performed together with a high international expertise, to turn this sector in a profitable sector in just 4 years and enter a new stage of extraordinary economic and social growth thanks to the contribution that this sector will provide us and which, differently from any other sector, is a contribution that creates the conditions for a development on many levels, in many dimensions and in many directions.

Of course, we have made our choice at any cost. Even at the cost that somebody might turn their back on us. Even at the cost that somebody might bear a grudge against us. Even at the cost that somebody might not vote for us, because our duty is to lead by showing people the truth. On the other hand, in order to keep our commitments we must do all the necessary operations, because I do not believe that a sane person can think that a terminally ill, as the power sector is, can stand erect, just because the doctor has changed or the hospital has changed and because he or she did escape from an incompetent doctor and ran away from a hospital that would generate more despair than hope. It is impossible to pass from this situation into a nomrmal one, then run, without accepting all the bitter but necessary medicine.

And of course it is a bitter medicine that we have chosen. A bitter medicine to open the eyes to everybody and to teach a lesson towhomever continues to think that that can steal power and get away with it.

We don’t have the luxury of depriving ourselves of 150 new schools every year in order to continue coexisting with power theft. We don’t have the luxury of depriving ourselves of 100 kilometer-long national roads every year, for we have to accept that these roads will not be done because 150 million Euros allocated for them must be stolen through one thousand and one reasons that actually have no reason connected to the national interest, neither with the interest of every family. We cannot accept that what we collect from companies as tax on profit in a year can get lost because of power theft. We cannot accept that today, at a time when we see a clear trend of change in agriculture, one of our main sources of economic growth, Albanian farmers will not receive ten times more our support because the money is stolen by power thieves. We cannot accept that we will not be able to build 6 regional modern hospitals in a year – while for a modern regional hospital in Fier we are barely collecting the funding to start the construction – and not to have every regional hospital we need in just two years, because power thieves have to steal that money.

The Government launched today the operational plan of measures and interventions against theft and abuse of power. National meeting on “Protecting energy and combating urban crime: public accountability challenges” marks the launch of a national action for identifying and putting before the law of all thieves and abusers of power.

The plan is the product of collaboration and coordination between a number of institutions, which will be led by the Distribution Company and the State Police.

During the meeting, several ministers and representatives of institutions, stakeholders of this plan’s implementation, presented an overview of the current critical situation in the energy sector, stressing the necessity of prompt and effective interventions to change the situation as soon as possible.

According to Minister of Energy and Industry Damian Gjiknuri, the future of the energy sector depends largely on vital actions to be undertaken in the coming months. In his speech he stressed the key role of the judicial and police in this regard.

Minister of Economy Arben Ahmetaj defined the launch of this action as the beginning of a new era, not just for the country’s energy system, but for the whole economic development.

Minister of Interior Tahiri said that “informal Albania is the biggest enemy of honest citizens and every Albanian family. It is the greatest enemy of the state, society and the law. We cannot any longer treat power as no one’s property.”

While Minister for Relations with Parliament Ermonela Felaj, besides assessing the national action against power thieves as a necessity, said: “The stealing of power violates also the power supply service and that this action should be punished as any other theft.”