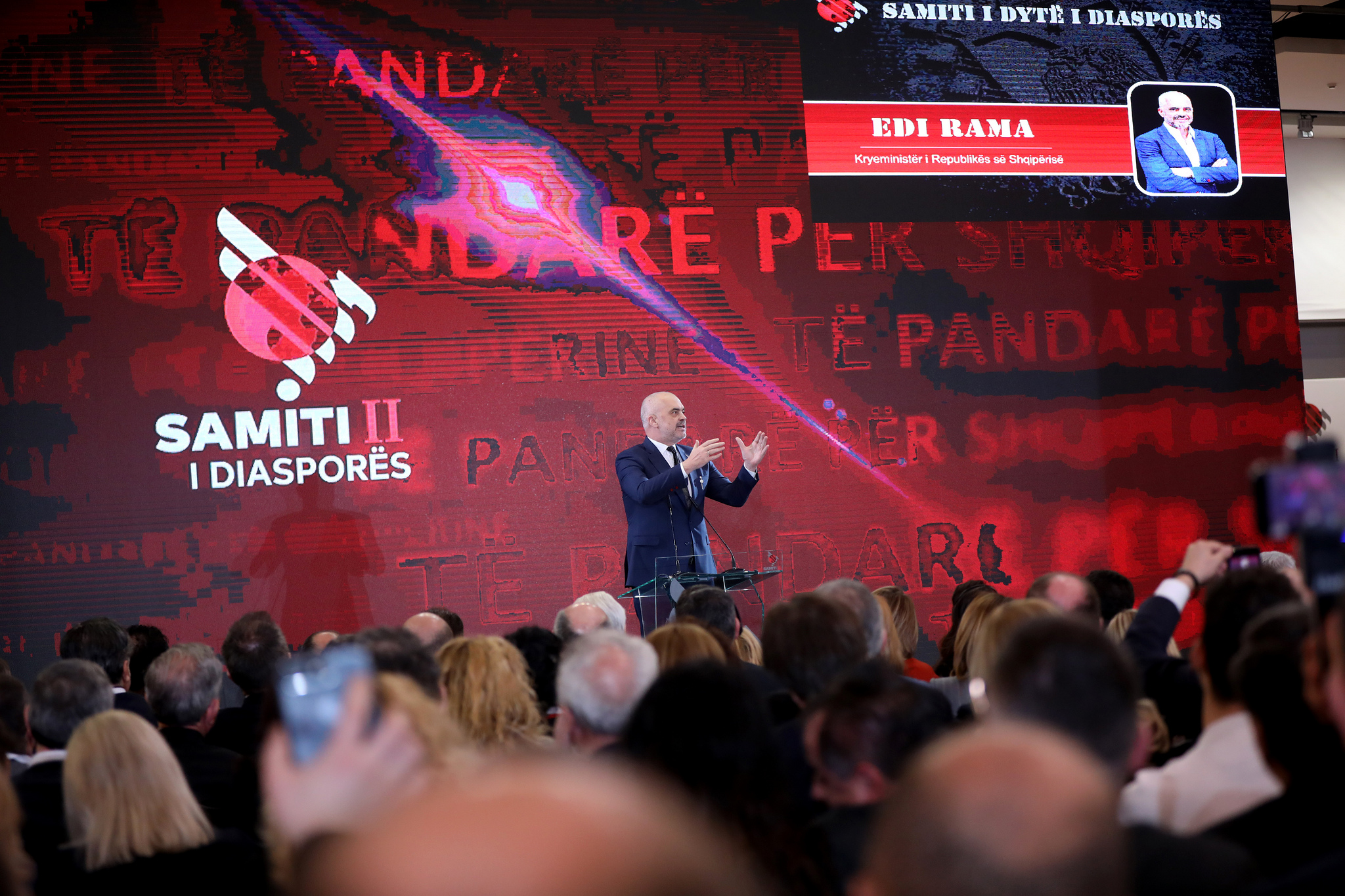 You know I always speak briefly and I am quite renowned for short speeches and today I was to deliver a longer speech than usual. But no, my speech was reviewed over the course of this introductory session to this summit. So, I won’t refer much to what I have written as it is needless to tell you how important you and the Diaspora are, yet, I believe it is necessary to fraternally share with you some thoughts I believe are valuable to our Albanian brotherhood, regardless of whether we live in Albania, Kosovo, Macedonia, North, Montenegro, South Serbia, or elsewhere.

A lot has been going on since the first-ever Diaspora summit until this summit and I would convincingly say that Albania is better and Albanians in general are better.

From the previous summit to this summit, Albanian language has been spoken in the Assembly of North Macedonia. If you need me to refresh your memory, it was neither 100 nor 10 years ago, but during the time span between these two summits the moment when Albanians in what North Macedonia is today were targeted as if they were second-class citizens, while the so-called Tirana Platform turned into an auto-da-fé to settle the electoral scores within Macedonia, igniting the fire of a conflict that could have sent back the country many and many years in the past. Thanks precisely to this brotherly interaction with national responsibility, as well as with high political awareness, between us here in Tirana and leaders in Macedonia, not only Albanians are much better today than they were yesterday, but what Macedonia’s President called unacceptable, Mother Teresa’s language, has become an official language in North Macedonia. Therefore, I would like to cordially greet our friend here Ali Ahmeti, appreciate and really congratulate him because there would have been no North Macedonia without Albanians, and no North Macedonia’s accession to NATO would have become a reality and no progress would have been made on North Macedonia’s path towards European integration without Albanians. We are the most interested in that state’s progress, it interests us this state becomes a model of harmony and coexistence between the two state-building people and we are happy to see Albanians living better in that state today than they used to be when we met together in the first Diaspora summit.

I believe we should all join the appeal issued by the President of Kosovo to the Albanians in Tuz for quite a simple reason; Wherever Albanians come together they are the best and they always win as history has shown. I would not quote Gjergj Fishta, neither Faik Konica, nor Fan Noli, and highlight what others have said about us, but the present shows that Albanians are the greatest enemies of Albanians. Nobody can defeat us wherever we unite and that’s why I call on Tuz’s Albanians to unite, unite and only unite and give yourselves the chance to govern that community decently and don’t let yourselves lose again just because of worthless and unnecessary hostilities toward each other.

On the other hand, I can’t help but express what I feel and what I felt when the President of Kosovo was addressing this summit. This was not included in my planned speech and there was not a plan to discuss this, but in the same sense and taking notice of the excellent example set by Ali Ahmeti and other leaders in North Macedonia, I would like to state today that Kosovo and Albanianhood. Though Kosovo, face a historic challenge. It is a challenge that is to be decided today, but it will determine how the unborn of today we will live after 230 years. There have not been, there is, and there can be nothing more dangerous and nothing more obstructive for Albanians than when confronted by Albanians and when for the minor accounts of the village, or for the minor club accounts, or for the minor causes of the political environment, we fly the flag and turn it into a weapon to fight each other about who is the patriot and who is the traitor, who is the good and the bad one, who is an angel and who is the devil.

I can’t pretend now as if you are not here and as if we are not here in Tirana and as if nothing has happened over recent days. I cannot do that. And again, it is the same old story. It is the history of the Albanians who oppose Albanians, not for Albania, not for the flag, not for ideals and ideas, but for small village scores only, for the small club accounts, for the minor accounts of the political environment.

I heard Liza saying that more women are needed in the decision-making process. Albanians against Albanians here in Albania have developed, cherished and spread the idea that this new era of Albania is the rime when criminals were born, grown up and have occupied Parliament.

While today we don’t need to know what history will do. Today we should keep moving ahead on the path we have embarked on, because we are talking about state-building and not about dining all together and drink raki, which is the easiest thing we can do and which – thanks to the Minister for Diaspora – we will do, but we are talking about the great fight, the real and the toughest fight and war ever been waged on corruption in Albania.

How corruption can be fought other than endeavouring to build a justice system that becomes a sworn enemy of corruption and that is hard on the heels of corruption?

Whom and when one has ever thought that there would come a day when judges and prosecutors in Albania, those who have treated justice system as if it was a private property and have made properties of Albanians citizens all higgledy-piggledy, will be held accountable?

High-level prosecutors and judges have been removed from the justice system. Of course, the process is not over yet, but a new justice system is being built step by step, clearing the rubbish from the palace of justice.

We are talking about building a state and an administration and not pretend as if we are doing so.

Thank God, the time when justice was done by the party and the time when the Prime Minister or the ruling majority decided who was to be sent to prison has gone in 1990!

This is the time to build a justice system just like in any other country you come from and this is exactly what we are doing now.

You are now used to the constant refrain “drugs, drugs, drugs” anytime you watch Albanian TV stations. Meanwhile, over the past two years, I would like to inform you that, not according to me, not according to the Albanian government, but according to the specialized international agencies, all cannabis plantations that we inherited have now been totally eradicated after we waged a war on them, putting the problem high on our agenda.

Lazarat has been always there and it could have well happened that you and your children had never come across the names of towns like Burrel, Bulqiza or Cerrik, but you had for sure heard of Tirana, Vlora and Lazarat.

Lazarat was our first battlefield.

I am telling you today that we are being accused, not because this is the truth, but because Albanians have turned against Albanians. I would tell one thing to the Albanians who were invited to attend this summit, but they are not here:

When we will speak?

Albania is better today than it used to be two years ago, because number of tourists visiting Albania has doubled. Three million tourists visited the country when we took over. Last year, their number doubled to 6 million and I am not concerned at all about what is going to happen with the government’s wall when seeing a group of Albanians attacking other Albanians without taking into account what they are doing to Albania when hitting head on the wall of the government. I am not concerned at all about what will happen with the governing majority, but it worries me what happens in the mind of all of those who watch such images on TV in Italy, Greece, America, and all over the globe.

I am concerned about what happens with those who wake up in the morning to open their little show that earns them a living and support family and see their consumers diminish.

It worries me what happens to that family running a flower shop and can no longer sell a bouquet of flowers, what I have been told by a lady I know for many years and owns a small shop. She told me that she had sold not a single flower since February 16th.

I’m worried about what happens to those who are preparing to open homes, guesthouses, and hotels for tourists. It worries me when I am told that Gjirokastra had recorded the highest number of hotel reservations from March through September, but unexpectedly all March bookings were called off on February 17, 18, and February 19. Cancelling March reservations means that entire households longing for that day so that they can feed themselves and generate income, will now remain with nothing.

My friends, the first summit was an emotional gathering. At this summit, as you will see for yourselves, we have not opened the door just to see and talk with you. We have done a lot of work. There are a number of issues we have discussed at the first summit and today you will see that those issues have now been translated into laws, government decisions and concrete commitments.

Of course, I fully agree with Liza and this is our objective. The Diaspora Summit should have the government as its partner, but it can’t have both the government of Albania and that of Kosovo doing everything.

The Summit is yours and is hosted just for you.

We want you to take the Summit’s ownership and we will support you to host a summit each year. Time has come for the summit to be held in Kosovo too, but also in North Macedonia and Albanians come together here, in Kosovo and North Macedonia every year. Why once in two years?

I would like to point out one thing. We have collected and taken notes about everything we have said at the first summit. Based on these notes, we have built several processes you will find out during the presentations and the discussions you will have with every cabinet member. However, you all, without exception, have said something: We want to vote. We want to express our will in the Diaspora when it comes to decide who will govern Albania.

We have already told that the migrants vote has been included in our program. It is our commitment we want to deliver on. I am sorry to tell you that no accord has been found on this matter. It is not that we have failed to agree particularly on this issue, but there are now a number of issues we are not agreeing on. What I assure you is that there are only two options regarding our commitment to your vote, your right to vote and your chance to vote; Either we will, or we will do it!

I wish we achieve this all together on a consensus. Should we fail doing so, then we will do it without a consensus.